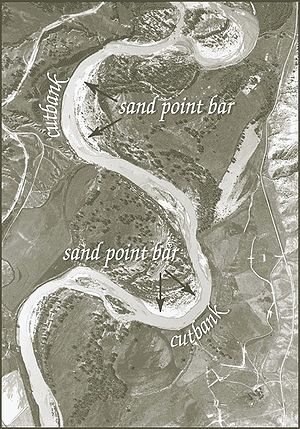 Cut bank erosion and point bar deposition as seen on the Powder River in Montana.

A point bar is a depositional feature made of alluvium that accumulates on the inside bend of streams and rivers below the slip-off slope. Point bars are found in abundance in mature or meandering streams. They are crescent-shaped and located on the inside of a stream bend, being very similar to, though often smaller than, towheads, or river islands.

Point bars are composed of sediment that is well sorted and typically reflects the overall capacity of the stream. They also have a very gentle slope and an elevation very close to water level. Since they are low-lying, they are often overtaken by floods and can accumulate driftwood and other debris during times of high water levels. Due to their near flat topography and the fact that the water speed is slow in the shallows of the point bar they are popular rest stops for boaters and rafters. However, camping on a point bar can be dangerous as a flash flood that raises the stream level by as little as a few inches (centimetres) can overwhelm a campsite in moments. 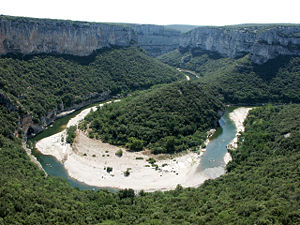 The concave bank is often a cut bank and an area of erosion. The eroded material is swept and rolled across the floor of the stream by the secondary flow and may be deposited on the point bar only a small distance downstream from its original location in the concave bank.

The point bar typically has a gently sloping floor with shallow water. The shallow water is mostly the accumulated boundary layer and does not have a fast speed. However, in the deepest parts of the stream where the stream is flowing freely, vortex flow prevails and the stream is flowing fastest where the radius of the bend is smallest, and slowest where the radius is greatest. The shallows around the point bar can become treacherous when the stream is rising. As the water depth increases over the shallows of the point bar, the vortex flow can extend closer toward the convex bank and the water speed at any point can increase dramatically in response to only a small increase in water depth.

Fallacy regarding formation of point bars

An enduring fallacy exists regarding the formation of point bars and oxbow lakes. The fallacy suggests they are formed by the deposition of a stream's suspended load as the velocity and energy of the stream decreases in the bend. This fallacy relies on the erroneous notion that the speed of the water is slowest on the inside of the bend (where the radius is smallest) and fastest on the outside of the bend (where the radius is greatest).

If it were true that, around a bend in a stream, the difference between the speed of the water near one bank and the other was sufficient to cause deposition of suspended solids on one bank but not the other, the deposition would occur near the concave bank rather than the convex bank because vortex flow is slowest where the radius of curvature is greatest. Any fluid, including water in a stream, can only flow around a bend in vortex flow.

All point bars typically have a gently sloping floor with shallow water. The shallow depth of the water, and the fact that it is an accumulation of the boundary layer, prevent the water from reaching fast speed over the point bar. It is probably this observation which led early geographers to believe the slowest part of the stream is where the radius is smallest.

In a slow-flowing stream or river, the difference in speed between one bank and the other is not sufficient to provide a credible explanation as to why all the deposition occurs on one bank, and none on the other. Similarly, the fallacy has no explanation as to why all the deposition occurs at a stream bend, and little or none occurs where the stream is following a straight course. (The speed of water in a stream does not slow just because the stream enters a bend.)

In a mature, meandering stream or river the water speed is slow, turbulence is low, and the water is not capable of holding coarse sand and gravel in suspension. In contrast, point bars comprise coarse sand, gravel, polished stones and other submerged objects. These materials have not been carried in suspension and then dropped on the point bar – they have been swept and rolled into place by the secondary flow that exists across the floor of every stream in the vicinity of a stream bend.