From Infogalactic: the planetary knowledge core
(Redirected from Politics of West Virginia)
Jump to: navigation, search 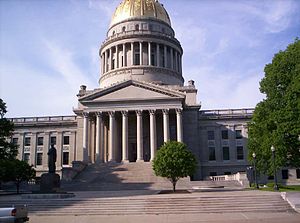 From the time of the Great Depression through the 1990s, the politics of West Virginia were largely dominated by the Democratic party. In the 2000 presidential election, George W. Bush claimed a surprise victory over Al Gore, with 52% of the vote; he won West Virginia again in 2004, with 56% of the vote.

Robert C. Byrd, a Democrat, represented the state of West Virginia in Congress for over 57 years, as a Member of the House from the now-defunct 6th District from 1953–1959, and as a United States Senator from 1959–2010. He served as Democratic Senate Leader from 1977–1989. In 2006 he became the longest-serving Senator in history, and in 2009 the longest-serving member of Congress in history. Senator Byrd died of pneumonia on June 28, 2010, aged 92. Governor Joe Manchin appointed Carte Goodwin to fill the seat until a special election was held in November 2010. Manchin was elected to the seat to fulfill the remainder of Byrd's term.

In the Republican landslide of 1988, it was one of only ten states, and the only southern state (as defined by the US Census), to give its electoral votes to Michael Dukakis; it was one of only six states to support Jimmy Carter over Ronald Reagan in 1980; and it supported Bill Clinton by large margins in both 1992 and 1996. The state has trended increasingly Republican in presidential elections; despite the earlier Democratic wins in presidential match-ups, it narrowly elected George W. Bush over Al Gore in 2000, then re-elected Bush by a much larger margin in 2004 and voted for John McCain in 2008 by a slightly larger margin than 2004. West Virginia was one of only 5 states, the others being Arkansas, Louisiana, Oklahoma and Tennessee, where McCain won by a larger margin in 2008 than George W. Bush in 2004. Mitt Romney won the state in the 2012 presidential election with 62% of the vote, a significant improvement over McCain's 56% vote share in 2008 and the first time in modern American history that a Republican candidate for president won every county in the state .[2] [3]

National Democrats such as Barack Obama, Nancy Pelosi and Harry Reid are extremely unpopular in West Virginia. As of late 2011, President Obama had a 24% approval rating in the state, with 76% disapproving [6] During his 2010 Senate campaign, then-Governor Joe Manchin released an ad touting his endorsement from the Republican-leaning NRA and slamming Obama's then-proposed cap and trade legislation.[7]

Evangelical Christians comprised 52 percent of the state's voters in 2008.[9] A poll in 2005 showed that 53 percent of West Virginia voters are Pro-Life, the seventh highest in the country.[10] In 2006, 16 percent favored gay marriage.[11] In 2008, 58 percent favored troop withdrawal from Iraq while just 32 percent wanted troops to remain.[12] On fiscal policy in 2008, 52 percent said raising taxes on the wealthier individuals would benefit the economy, while 45 percent disagreed.[13]

The most consistent support for Democrats is found in the coal fields of Southwestern West Virginia (McDowell, Mingo, Logan, Wyoming, and Boone Counties), as well as in the larger cities. Republicans are most numerous to the east of the Allegheny Mountains, especially in the state's Eastern Panhandle and Potomac Highlands, as well as in the Huntington and Charleston suburbs, most typified in Putnam County. The farming region of the Mid-Ohio Valley, particularly Wood, Jackson and Mason Counties, also historically leans Republican. The Northern Panhandle and North-Central West Virginia regions usually split right down the middle in terms of being Republican or Democratic, as does the New River/Greenbrier Valley in the Southeast around Beckley, Beckley, Fayetteville, and Lewisburg. Since 1996, coal interests have contributed more than $4 million to candidates for governor, the state Supreme Court and the West Virginia Legislature. The 2004 election was a record-setter for the coal industry. Gov. Joe Manchin received $571,214 from coal interests for his campaign and $174,500 for his inaugural. West Virginians for Coal, the West Virginia Coal Association's political action committee, contributed more money than any other coal industry donor.[14]