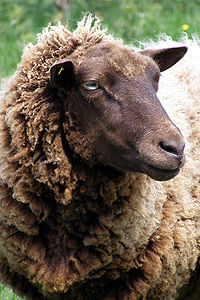 This Shetland ewe is naturally polled 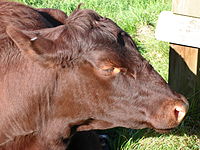 Polled livestock are livestock without horns in species which are normally horned. The term refers both to breeds or strains which are naturally polled through selective breeding and also to naturally horned animals which have been dehorned.[1] Natural polling occurs in cattle, yaks, water buffalo and goats, and in these it affects both sexes equally; however in sheep, both sexes may be horned, both polled, or only the females polled.

The archaic term muley or mulley[2] is sometimes used to refer to hornless livestock (especially cattle) in folk songs, tales and poetry,[3] and in the name of the polled Irish Moiled cattle breed. "Muley" derives from Irish and Scottish Gaelic maol, and Welsh moel.

In cattle, the polled allele is genetically dominant to that for horns.

The development of wholly polled strains in goats has been discouraged by a 1944 study that suggested a link between the polling gene and hermaphrodism. [5] Unfortunately, little study on the subject has occurred since. Naturally polled water buffalo also have genital defects.[6]

Polled livestock are preferred by many farmers for a variety of reasons, the foremost being that horns can pose a physical danger to humans, other livestock and equipment. Horns may also interfere with equipment used with livestock (such as a cattle crush), or they may become damaged during handling.

In other circumstances, horned animals may be preferred, for example, to help the animal defend itself against predators, to allow the attachment of head yokes to draught oxen, to provide a hand-hold on smaller animals such as sheep, or for aesthetic reasons – in some breeds the retention of horns is required for showing.

Polled strains have been developed of many cattle breeds which were originally horned. This has usually been done by crossing with naturally polled breeds, most commonly Angus and Galloway cattle. For example, polled Jersey cattle originated in Ohio sometime prior to 1895. Two strains were developed, the first to appear being founded by crosses of registered Jersey bulls (the standard) on common muley (hornless) cows. These were graded up by the continued use of purebred Jersey sires, selection being made of the polled offspring of each generation, the horned progeny being discarded. Thus originated what was later known as the single-standard strain. As in the case of the Polled Shorthorns and Polled Herefords, the development of the single-standard strain was soon followed by the appearance of a double-standard strain, founded by a few naturally hornless sports which were discovered in registered herds of horned Jersey cattle. These standards were bred among themselves or crossed with registered horned Jerseys, followed by selection for the polled head, and the strain was developed in this way.[8]

In Australia, work undertaken by the Beef CRC and Queensland University has resulted in a new test that can assist producers to select "true polled" bulls for their breeding enterprises. The test is approximately 90% accurate (but varies by breed due to differences in proportions of polled, scurred and horned animals) and validation is ongoing using larger populations of animals.[9]