From Infogalactic: the planetary knowledge core
Jump to: navigation, search
For other uses, see Pond (disambiguation). 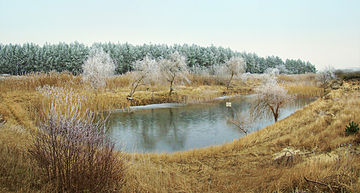 A pond in Swarzynice, Poland

A pond is a body of standing water, either natural or artificial, that is usually smaller than a lake.[1] They may arise naturally in floodplains as part of a river system, or they may be somewhat isolated depressions (examples include vernal pools and prairie potholes). Usually they contain shallow water with marsh and aquatic plants and animals.[2] A few animals also make their home in ponds, including both alligators and beavers. The type of life in a pond is generally determined by a combination of factors including water level regime (particularly depth and duration of flooding) and nutrient levels, but other factors may also be important, including presence or absence of shading by trees, presence or absence of streams, effects of grazing animals, and salinity.[3]

Ponds are frequently human-constructed. In country side farmers and villagers dig a pond in their backyard or increase the depth of an existing pond by removing layers of mud during summer season. A wide variety of artificial bodies of water are classified as ponds. Some ponds are created specifically for habitat restoration, including water treatment. Others, like water gardens, water features and koi ponds are designed for aesthetic ornamentation as landscape or architectural features. Fish ponds are designed for commercial fish breeding, and solar ponds designed to store thermal energy.

Standing bodies of water such as puddles, ponds, and lakes are often categorized separately from flowing water courses, such as a brook, creek, stream or river. Nutrient levels and water quality in ponds can be controlled through natural process such as algal growth, or through artificial filtration, such as an algae scrubber. 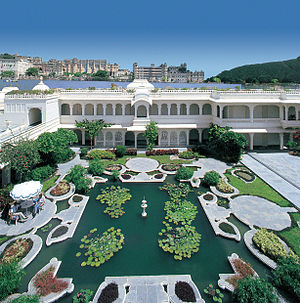 A small artificial garden pond at the Taj Lake Palace in Udaipur, India

The technical distinction between a pond and a lake has not been universally standardized. Limnologists and freshwater biologists have proposed formal definitions for pond, in part to include 'bodies of water where light penetrates to the bottom of the waterbody,' 'bodies of water shallow enough for rooted water plants to grow throughout,' and 'bodies of water which lack wave action on the shoreline.' Each of these definitions has met with resistance or disapproval, as the defining characteristics are each difficult to measure or verify. Accordingly, some organizations and researchers have settled on technical definitions of pond and lake which rely on size alone.[4]

Even among organizations and researchers who distinguish lakes from ponds by size alone, there is no universally recognised standard for the maximum size of a pond. The international Ramsar wetland convention sets the upper limit for pond size as 8 hectares (20 acres),[5] but biologists have not universally adopted this convention. Researchers for the British charity Pond Conservation have defined a pond to be 'a man-made or natural waterbody which is between 1 m2 and 20,000 m2 in area (2 ha or ~5 acres), which holds water for four months of the year or more.'[4] Other European biologists have set the upper size limit at 5 ha (12 acres).[6]

In practice, a body of water is called a pond or a lake on an individual basis, as conventions change from place to place and over time. In North America, even larger bodies of water have been called ponds; for example, Walden Pond in Concord, Massachusetts measures 61 acres (25 ha), nearby Spot Pond is 340 acres (140 ha), while in between is Crystal Lake at 33 acres (13 ha). There are numerous examples in other states of bodies of water less than 10 acres (4.0 ha) being called lakes. As the case with Crystal Lake shows, marketing purposes may be the driving factor behind some names.[7] 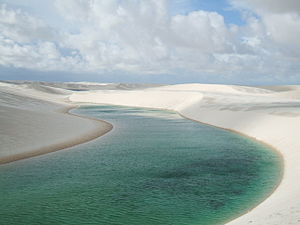 Ponds can result from a wide range of natural processes. Any depression in the ground which collects and retains a sufficient amount of precipitation can be considered a pond, and such depressions can be formed by a variety of geological and ecological events. Rivers often leave behind ponds in natural flood plains after spring flooding, and these can be very important to breeding fish, particularly in large river systems like the Amazon.[8] Retreating glaciers can leave behind landscapes filled with small depressions, each developing its own pond; an example is the Prairie Pothole Region of North America.[9] Many areas of landscape contain small depressions which form temporary ponds after spring snow melt, or during rainy seasons; these are called vernal ponds, and may be important sites for amphibian breeding.[10] Some ponds are created by animals. Beaver ponds are the best known example, but alligators also excavate ponds as well.[3] In landscapes with organic soils, fires can also create depressions during periods of drought; these become open water when normal water levels return.[11] 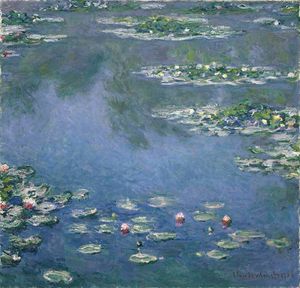 During the last thirty years of his life, the main focus of Claude Monet's artistic production was a series of about 250 oil paintings depicting the lily pond in his flower garden

One of the most important features of ponds is the presence of standing water, which provides habitat for wetland plants and animals. Familiar examples might include water-lilies, frogs, turtles and herons. Often, the entire margin of the pond is fringed by wetland, and these wetlands support the aquatic food web, provide shelter for wildlife, and stabilize the shore of the pond. Some grazing animals like geese and muskrats consume the wetland plants directly as a source of food. In many other cases, however, the pond plants fall into the water and decay. A large number of invertebrates then feed on the decaying plants, and these invertebrates provide food for wetland species including fish, dragonflies and herons. The open water may allow algae to grow, and these algae may support yet another food web that includes aquatic insects and minnows. A pond, therefore, may have combinations of three different food webs, one based on larger plants, one based upon decayed plants, and one based upon algae. Hence, ponds often have a large number of different animal species using the wide array of food sources. They therefore provide an important source of biological diversity in landscapes.

Vernal ponds are ponds which dry up for part of the year. Naturally occurring vernal ponds do not usually have fish. They are called vernal ponds because they are typically at their peak depth in the spring ("vernal" means to do with the spring). The absence of fish is a very important characteristic, since it provides amphibians with breeding locations free from predation by fish. Hence, introducing fish to a pond can have serious detrimental consequences. In some parts of the world, such as California, the vernal ponds have rare and endangered plant species. On the coastal plain, they provide habitat for endangered frogs such as the Mississippi Gopher Frog.[3]

Ponds, being small, are easily disrupted by human activity such as hikers. Drainage of ponds is a frequent problem in agricultural areas, such as in the prairie potholes of North America. Although ponds are a useful source of water for cattle, overgrazing and wading can turn a pond into a muddy hole. Nutrient sources such as fertilized pastures, human sewage, and even lawn fertilizer can cause explosive growth of algae, and the loss of rooted plants and many other aquatic species. Roads near ponds can kill large numbers of amphibians and turtles that may migrate to and from the pond as part of their annual breeding cycle. Many well-intentioned people introduce fish to ponds, being unaware that some species of fish eat aquatic plants, stir up sediment and eat the young of amphibians and many invertebrate species. The gentle slope of land into ponds also provides an expanse of habitat for wetland plants and wet meadows. The construction of retaining walls, or lawns, can severely degrade the life in a pond.

In some landscapes, ponds are artificially constructed, perhaps to provide wildlife viewing opportunities, or to treat wastewater, or as part of a golf course. The design of a pond determines how productive it will be for wildlife. In general, gently sloping shorelines with broad expanses of wetland plants not only provide the best conditions for wildlife, but they help protect water quality from sources in the surrounding landscapes. It is also beneficial to allow water levels to fall each year during drier periods. Roads and houses should be kept as far away as possible.[12]

Another important way to add ponds back into landscapes is to restore rivers so that they can flood and meander to create large numbers of natural ponds, including vernal pools and wetlands, in river valleys.[13] 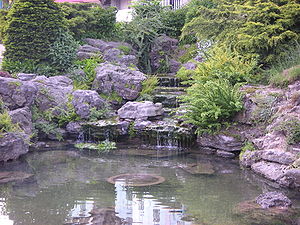 In origin, pond is a variant form of the word pound, meaning a confining enclosure.[14] As straying cattle are enclosed in a pound so water is enclosed in a pond. In earlier times, ponds were artificial and utilitarian; as stew ponds, mill ponds and so on. The significance of this feature seems, in some cases, to have been lost when the word was carried abroad with emigrants. In the United States, natural pools are often called ponds. Ponds for a specific purpose keep the adjective, such as "stock pond", used for watering livestock.

Pond usually implies a quite small body of water, generally smaller than one would require a boat to cross. Another definition is that a pond is a body of water where even its deepest areas are reached by sunlight or where a human can walk across the entire body of water without being submerged. In some dialects of English, pond normally refers to small artificially created bodies of water.

Some regions of the United States define a pond as a body of water with a surface area of less than 10 acres (4.0 ha). Minnesota, known as the 'land of 10,000 lakes' is commonly said to distinguish lakes from ponds, bogs and other water features by this definition,[15] but also says that a lake is distinguished primarily by wave action reaching the shore.[16] 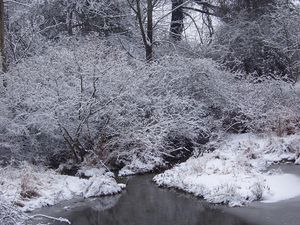 The term is also used for temporary accumulation of water from surface runoff (ponded water).

There are various regional names for naturally occurring ponds. In Scotland, one of the terms is lochan, which may also apply to a large body of water such as a lake. In North American prairies, they may be termed playas.[17]

Globally, the most important service provided by a pond, at many scales, is the production of fish and other wildlife. These are often also a source of food for humans, as well as an important source of recreation. At the same time, these ponds help maintain water quality by recycling nutrients.

In the Indian subcontinent, Hindu temples usually have a pond nearby so that pilgrims can take baths. These ponds are considered sacred.

In medieval times in Europe, it was typical for many monastery and castles (small, partly self-sufficient communities) to have fish ponds. These are still common in Europe and in East Asia (notably Japan), where koi may be kept.

In agriculture, treatment ponds may reduce nutrients released downstream from the pond. They may also provide irrigation reservoirs at times of drought.

Some notable ponds are: