From Infogalactic: the planetary knowledge core
Jump to: navigation, search
For the college in Houston, Texas, see North American College.

The Pontifical North American College is a Roman Catholic educational institution in Rome, Italy that forms seminarians for priestly ministry in the dioceses of the United States and elsewhere, and that provides a residence for priests from the United States and elsewhere who are pursuing graduate studies or continuing formation programs in Rome. Oversight of the College is the responsibility of the Holy See's Congregation for the Clergy,[1] which is delegated for most matters to the United States Conference of Catholic Bishops acting through the College's Episcopal Board of Governors.

The North American College was founded in 1859 by Pope Pius IX. Its first home was at a former Dominican and Visitation Convent, the Casa Santa Maria, located in central Rome near the Trevi Fountain.[2] It "occupied conventual buildings of the Dominican Priory at Santa Maria Sopra Minerva," which at that time was also the home of the Dominican College of St. Thomas which would grow into the Pontifical University of St. Thomas Aquinas, Angelicum.[3]

It was granted pontifical status by Pope Leo XIII in 1884[4] and was incorporated in the United States by a Special Act of the Maryland General Assembly in 1886 as a non-stock (not-for-profit) corporation under the name "The American College of the Roman Catholic Church of the United States."[5] This is its official name for the purposes of United States federal and state law, and for such things as contributions and bequests. The College is exempt from United States Federal taxation, and contributions to it are deductible by the donor to the extent provided in United States Federal tax law and regulations and other applicable laws and regulations.[6]

Until the outbreak of the Second World War, all the College's students resided at the Casa Santa Maria. During the war, the various national seminaries in Rome were temporarily closed by Pope Pius XII and non-Italian students returned to their home countries. When the war ended and the seminaries re-opened, the Roman Catholic Church in America had experienced such an increase in vocations to the priesthood that the Casa Santa Maria could no longer accommodate the many seminarians whom United States bishops wanted to send to Rome for their priestly formation and university studies. To respond to that situation, the Roman Catholic bishops of the United States authorized construction of a new Seminary complex on the Janiculum Hill overlooking the Vatican. The complex was built on the grounds of Villa Gabrielli al Gianicolo, land the bishops had purchased in 1926.[7]

Pope Pius XII dedicated the newly built seminary complex on October 14, 1953.[8] The Casa Santa Maria then became a residence for ordained American Catholic priests pursuing advanced studies in Rome. In 2009 and 2010, an historic eighteenth-century residence on the Janiculum Hill Campus was renovated to provide a new home, the Casa O'Toole, for the College's Institute for Continuing Theological Education (ICTE), a continuing formation program for priests ordained ten years or more; and a new convent was built for the religious Sisters who make up part of the College staff. In January, 2015 the College opened a newly constructed wing on the main Janiculum Hill building. The new wing houses classrooms, gathering space, liturgical practice chapels and administrative offices.

On 23 November 2015, the Congregation for the Clergy announced the appointment of Rev. Peter C. Harman of Springfield, Illinois, to succeed Monsignor James F. Checchio as the College's rector, effective on 1 February 2016.[9]

The College has four Departments: a Seminary, which prepares candidates for the Catholic priesthood; the Casa Santa Maria, a residence for Catholic priests pursuing graduate studies: the ICTE program; and the Bishops' Office for U.S. Visitors to the Vatican, which serves pilgrims who come to Rome from the United States, as well as persons who travel to Rome from the United States on College or Holy See matters, particularly members of the United States Conference of Catholic Bishops. The College has welcomed numerous illustrious visitors, including four Popes, President John F. Kennedy, and evangelist Billy Graham.

For the 2014–2015 academic year, enrollment in the Seminary is approximately 250, at the Casa Santa Maria approximately 75; and at each of several continuing formation sessions, approximately 30.

Enrollment in the College is available to properly qualified Catholic seminarians and priests who are studying for a diocese in the United States of America, nominated for such enrollment by a diocesan bishop of the United States of America, and approved for enrollment by the Rector. Enrollment of students who are studying for non-United States dioceses or who are not American citizens is by decision of the Board.[10] At present, a number of Australian seminarians are enrolled in the Seminary Division, and several priests of non-United States nationality are resident at the Casa Santa Maria or are enrolled in the College's continuing formation program. For their academic formation, the students of all departments may, as approved by their bishop and the Board of Governors, attend any Pontifical University or other educational institution approved by the Holy See.[11] Human, pastoral and spiritual formation is provided by the faculty of the College. 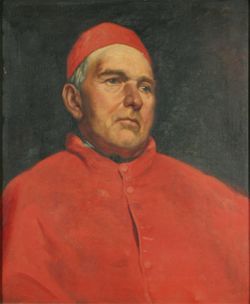 William Cardinal O'Connell was the seventh rector of the College from 1895 to 1901.

View of the Janiculum campus of the North American College from the cupola of Saint Peter's Basilica in Vatican City.

In addition to their academic and pastoral activities, the students at the College participate in athletic competitions with students from other Roman ecclesiastical institutions. Since 2007, the College has competed in an annual soccer tournament among Roman Colleges, called the Clericus Cup. The College's team, nicknamed the "North American Martyrs," won the championship in 2012 and 2013 and was runner-up in 2009 and 2010.[12]