Pope Nicholas V (Latin: Nicholaus V) (15 November 1397 – 24 March 1455), born Tommaso Parentucelli, was Pope from 6 March 1447 until his death in 1455.[1] The Pontificate of Nicholas saw the fall of Constantinople to the Ottoman Turks. He is the most recent pope to take the name "Nicholas" upon his election.

His mother, Andreola Bosi of Fivizzano, married Bartolomeo Parentucelli, a physician who practiced medicine in Sarzana, an important town in Lunigiana. [2] The Lunigiana region had long been fought over by competing Tuscan and Ligurian forces. While Fivizzano would remain a key center of Florentine power in Tuscan Lunigiana, Tommaso Parentucelli, was born in Sarzana in 1397, just three years after the town was taken back from the Florentines by the Genoese Republic. His father died while he was young. Parentucelli later became a tutor, in Florence, to the families of the Strozzi and Albizzi, where he met the leading humanist scholars.

He studied at Bologna and Florence, gaining a degree in theology in 1422.[3] Bishop Niccolò Albergati was so awe-struck with his capabilities that he took him into his service and gave him the chance to pursue his studies further by sending him on a tour through Germany, France and England. He was able to collect books, for which he had an intellectual's passion, wherever he went. Some of them survive with his marginal annotations.

He attended the Council of Florence[4] and in 1444, when his patron died, he was appointed Bishop of Bologna in his place.[5] Civic disorders at Bologna were prolonged, so Pope Eugene IV soon named him as one of the legates sent to Frankfurt. He was to assist in negotiating an understanding between the Papal States and the Holy Roman Empire, regarding undercutting or at least containing the reforming decrees of the Council of Basel (1431–1439). 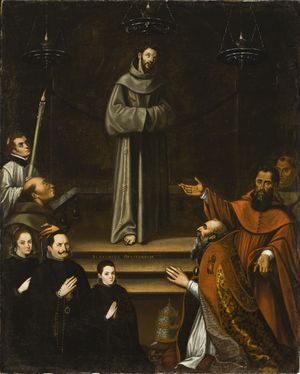 Saint Francis of Assisi according to Pope Nicholas V's Vision .[6]

His successful diplomacy gained him the reward, on his return to Rome, of the title Cardinal-Priest of Santa Susanna in December 1446. At the papal conclave of 1447 he was elected Pope in succession to Eugene IV on 6 March. He took the name Nicholas in honour of his early benefactor, Niccolò Albergati.[7]

The eight scant years of his pontificate were important in the political, scientific, and literary history of the world. Politically, he concluded the Concordat of Vienna, or Aschaffenburg (17 February 1448) with the German King, Frederick III,[7] by which the decrees of the Council of Basel against papal annates and reservations were abrogated so far as Germany was concerned. In the following year he secured a still greater tactical triumph with the resignation of the Antipope Felix V on 7 April and his own recognition by the rump of the Council of Basel that assembled at Lausanne.

In 1450, Nicholas held a Jubilee at Rome,[7] and the offerings of the numerous pilgrims who thronged to Rome gave him the means of furthering the cause of culture in Italy, which he had so much at heart. In March 1452 he crowned Frederick III as Holy Roman Emperor in St. Peter's, in what was the last imperial coronation held in Rome. Within the city of Rome, Nicholas introduced the fresh spirit of the Renaissance. His plans were of embellishing the city with new monuments worthy of the capital of the Christian world.

His first care was practical, to reinforce the city's fortifications,[8] cleaning and even paving some main streets and restoring the water supply. The end of ancient Rome is sometimes dated from the destruction of its magnificent array of aqueducts by 6th-century invaders. In the Middle Ages Romans depended for water on wells and cisterns, and the poor dipped their water from the yellow Tiber. The Aqua Virgo aqueduct, originally constructed by Agrippa, was restored by Nicholas and emptied into a simple basin that Leon Battista Alberti designed, the predecessor of the Trevi Fountain.

But the works on which Nicholas especially set his heart were the rebuilding of the Vatican, the Borgo district, and St Peter's Basilica, where the reborn glories of the papacy were to be focused.

He got as far as pulling down part of the ancient basilica, made some alterations to the Lateran Palace (of which some frescos by Fra Angelico bear witness), and laid up 2,522 cartloads of marble from the dilapidated Colosseum for use in the later constructions.

Under the generous patronage of Nicholas, humanism made rapid strides as well. The new humanist learning had been hitherto looked on with suspicion in Rome, a possible source of schism and heresy from an unhealthy interest in paganism. For Nicholas, humanism became a tool for the cultural aggrandizement of the Christian capital, and he sent emissaries to the East to attract Greek scholars after the fall of Constantinople.[9] The pope also employed Lorenzo Valla to translate Greek histories,[10] pagan as well as Christian, into Latin. This industry, coming just before the dawn of printing, contributed enormously to the sudden expansion of the intellectual horizon.

Nicholas, with assistance from Enoch of Ascoli and Giovanni Tortelli, founded a library of nine thousand volumes, including manuscripts rescued from the Turks after the fall of Constantinople. The Pope himself was a man of vast erudition, and his friend Aeneas Silvius Piccolomini, later Pope Pius II, said of him that "what he does not know is outside the range of human knowledge". Pope Nicolas was also important in establishing the Vatican library and protecting scholars who came to study the works found there. He saved many Greek works and writing using the library as a safe haven for them during the time period.[11]

He was compelled, however, to add that the lustre of his pontificate would be forever dulled by the fall of Constantinople, which the Turks took in 1453. Unsuccessful in a campaign to unite Christian powers to come to the aid of Constantinople, just before that great citadel was conquered, Nicholas had ordered 10 papal ships to sail with ships from Genoa, Venice and Naples to defend the capital of the Eastern Roman Empire. However, the ancient capitol fell before the ships could offer any aid. The Pope bitterly felt this catastrophe as a double blow to Christendom and to Greek letters. "It is a second death", wrote Aeneas Silvius, "to Homer and Plato."

Nicholas preached a crusade and endeavoured to reconcile the mutual animosities of the Italian states, but without much success. He did not live long enough to see the effect of the Greek scholars armed with unimagined manuscripts who began to find their way to Italy.

In undertaking these works, Nicholas was moved "to strengthen the weak faith of the populace by the greatness of that which it sees". The Roman populace, however, appreciated neither his motives nor their results, and in 1452 a formidable conspiracy for the overthrow of the papal government under the leadership of Stefano Porcaro was discovered and crushed. This revelation of disaffection, together with the fall of Constantinople in 1453, darkened the last years of Pope Nicholas. "As Thomas of Sarzana", he said, "I had more happiness in a day than now in a whole year". 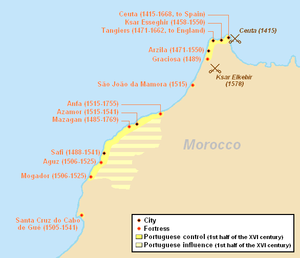 In late spring of 1452 Byzantine Emperor Constantine XI wrote to Pope Nicholas for help against the impending siege by Ottoman Sultan Mehmed II. Nicholas issued the bull "Dum Diversas" (18 June 1452) authorizing King Alfonso V of Portugal to "attack, conquer, and subjugate Saracens, pagans and other enemies of Christ wherever they may be found." Issued less that a year before the Fall of Constantinople in 1453, the bull may have been intended to begin another crusade against the Ottoman Empire.[12]

Ownership of the Canary Islands continued to be a source of dispute between Spain and Portugal and Nicholas was asked to settle the matter, ultimately in favor of the Portuguese.[13] The geographical area of the concession given in the bull is not explicit, but historian Richard Raiswell finds that it clearly refers to the recently discovered lands along the coast of West Africa.[14] Portuguese ventures were intended to compete with the Muslim trans-Sahara caravans, which held a monopoly on West African gold and ivory.[15]

The Portuguese claimed territorial rights along the African coast by virtue of having invested time and treasure in discovering it; the Castilian claim was based on their being the heirs of their Visigoth ancestors. In 1454 a fleet of caravels from Seville and Cadiz traded along the African coast and upon their return, were intercepted by a Portuguese squadron. Enrique IV of Castile threatened war. Afonso V appealed to the Pope for moral support of Portugal's right to a monopoly of trade in lands she discovered.[16]

The bull, Romanus Pontifex, issued on January 8, 1455, endorsed Portuguese possession of Cuerta (which they already held), and the exclusive right to trade, navigation, and fishing in the discovered lands, and reaffirmed the previous Dum Diversas. It granted permission to Afonso and his heirs to "... make purchases and sales of any things and goods, and victuals whatsoever, as it may seem fit, with any Saracens and infidels in said regions; ... provided they be not iron instruments, wood used for construction, cordage, ships, and any kinds of armor." ,[17]

It also sanctioned the purchase of black slaves from "the infidel".[18] "... many Guineamen and other negroes, taken by force, and some by barter of unprohibited articles, or by other lawful contract of purchase, have been ... converted to the Catholic faith, and it is hoped, by the help of divine mercy, that if such progress be continued with them, either those peoples will be converted to the faith or at least the souls of many of them will be gained for Christ." [17]

The bull conferred exclusive trading rights to the Portuguese between Morocco and the Indies with the rights to conquer and convert the inhabitants.[19] A significant concession given by Nicholas in a brief issued to King Alfonso in 1454 extended the rights granted to existing territories to all those that might be taken in the future.[20]

It has been argued that collectively the two bulls issued by Nicholas gave the Portuguese the rights to acquire slaves along the African coast by force or trade. The concessions given in them were confirmed by bulls issued by Pope Callixtus III (Inter Caetera quae in 1456), Sixtus IV (Aeterni regis in 1481), and Leo X (1514), and they became the models for subsequent bulls issued by Pope Alexander VI : Eximiae devotionis (3 May 1493), Inter Caetera (4 May 1493) and Dudum Siquidem (23 September 1493), in which he conferred similar rights to Spain relating to the newly discovered lands in the Americas.[21]