Pope Sylvester I (died 31 December 335), whose name is also spelled Silvester, was pope from 31 January, 314 to his death in 335. He succeeded Pope Miltiades.[2] He filled the See of Rome at an important era in the history of the Catholic Church, yet very little is known of him.[3] The accounts of his papacy preserved in the Liber Pontificalis (seventh or eighth century) contain little more than a record of the gifts said to have been conferred on the Church by Constantine I,[4] but it does say that he was the son of a Roman named Rufinus.[5]

During his pontificate, the great churches founded at Rome by Constantine, e.g. the Basilica of St. John Lateran, Santa Croce in Gerusalemme, Old St. Peter's Basilica, and several cemeterial churches, were built over the graves of martyrs.[5][6]

Sylvester did not attend the First Council of Nicaea in 325, but he was represented by two legates, Vitus and Vincentius, and he approved the council's decision.

Part of the Symmachean forgeries, the Vita beati Silvestri (c. 501–508), which has been preserved in Greek and Syriac (and in Latin in the Constitutum Silvestri), is an apocryphal alleged account of a Roman council, including legends of Sylvester's close relationship with the first Christian emperor. These also appear in the Donation of Constantine.[5]

Long after his death, the figure of Sylvester was embroidered upon in a fictional account of his relationship to Constantine, which seemed to successfully support the later Gelasian doctrine of papal supremacy, papal auctoritas (authority) guiding imperial potestas (power), the doctrine that is embodied in the forged Donation of Constantine of the eighth century. In the fiction, of which an early version is represented in the early sixth-century Symmachean forgeries emanating from the curia of Pope Symmachus (died 514), the Emperor Constantine was cured of leprosy by the virtue of the baptismal water administered by Sylvester. 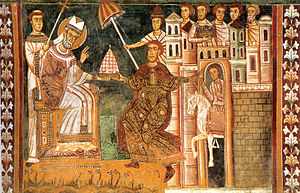 Pope Sylvester I and Constantine

The Emperor, abjectly grateful, not only confirmed the bishop of Rome as the primate above all other bishops, he resigned his imperial insignia and walked before Sylvester's horse holding the Pope's bridle as the papal groom. The Pope, in return, offered the crown of his own good will to Constantine, who abandoned Rome to the pope and took up residence in Constantinople.[7] "The doctrine behind this charming story is a radical one," Norman F. Cantor observes: "The pope is supreme over all rulers, even the Roman emperor, who owes his crown to the pope and therefore may be deposed by papal decree". Such a useful legend quickly gained wide circulation; Gregory of Tours referred to this political legend in his history of the Franks, written in the 580s.

Pope Sylvester II, himself a close associate of Otto III, Holy Roman Emperor, chose the name Sylvester in imitation of Sylvester I.

In the West, the liturgical feast of Saint Sylvester is on 31 December, the day of his burial in the Catacomb of Priscilla.[5] This is the last day in the year and, accordingly, in German-speaking countries and in some others close to them, New Year's Eve is known as Silvester. In other countries, too, the day is usually referred to as Saint Sylvester's Day or the Feast of Saint Sylvester. In São Paulo, Brazil, a long-distance running event called the Saint Silvester Road Race occurs every year on 31 December. 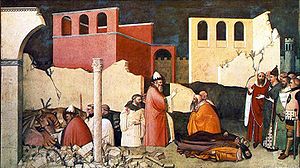 Pope Sylvester I portrayed slaying a dragon and resurrecting its victims, a fresco by Maso di Banco

The Donation of Constantine is a document fabricated in the second half of the eighth century, purporting to be a record by the Emperor himself of his conversion, the profession of his new faith, and the privileges he conferred on Pope Sylvester I, his clergy, and their successors. According to it, Pope Sylvester was offered the imperial crown, which, however, he refused.[8]

"Lu Santu Papa Silvestru", a story in Giuseppe Pitrè's collection of Sicilian fables, recounts the legend as follows: Constantine the king wants to take a second wife, and asks Sylvester. Sylvester denies him permission, calling on heaven as witness; Constantine threatens him, and Sylvester, rather than give in, escapes into the woods. Not long after, Constantine falls ill; when he is desperate of ever regaining his health he has a dream which commands him to send for Sylvester. He obeys, and Sylvester receives Constantine's messengers in his cave and swiftly baptizes them, whereafter (having shown them several miracles) he is led back to Constantine, whom he baptizes also, and cures. In this story, Constantine and his entourage are not pagans but Jews.[9]

Another legend has Sylvester slaying a dragon. He is often depicted with the dying beast.[10][11]