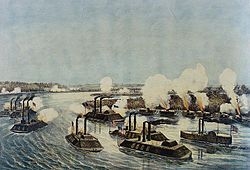 The American Civil War (1861–1865) was a sectional rebellion against the United States of America by the Confederate States, formed of eleven southern slave states' governments which moved to secede from the Union after the 1860 election of Abraham Lincoln as President of the United States. The Union's victory was eventually achieved by leveraging advantages in population, manufacturing and logistics and through a strategic naval blockade denying the Confederacy access to the world's markets.

In many ways, the conflict's central issues – the enslavement of African Americans, the role of constitutional federal government, and the rights of states  – are still not completely resolved. Not surprisingly, the Confederate army's surrender at Appomattox on April 9, 1865 did little to change many Americans' attitudes toward the potential powers of central government. The passage of the Thirteenth, Fourteenth and Fifteenth amendments to the Constitution in the years immediately following the war did not change the racial prejudice prevalent among Americans of the day; and the process of Reconstruction did not heal the deeply personal wounds inflicted by four brutal years of war and more than 970,000 casualties – 3 percent of the population, including approximately 560,000 deaths. As a result, controversies affected by the war's unresolved social, political, economic and racial tensions continue to shape contemporary American thought. The causes of the war, the reasons for the outcome, and even the name of the war itself are subjects of much discussion even today.

"Dixie", also known as "I Wish I Was in Dixie", "Dixie's Land" and other titles, is a popular American song. It is one of the most distinctively American musical products of the 19th century, and probably the best-known song to have come out of blackface minstrelsy. Although not a folk song at its creation, "Dixie" has since entered the American folk vernacular. The song likely cemented the word "Dixie" in the American vocabulary as a synonym for the Southern United States.

The song originated in the blackface minstrel show of the 1850s and quickly grew famous across the United States. Its lyrics, written in a racist, exaggerated version of African American Vernacular English, tell the story of a freed black slave pining for the plantation of his birth. During the American Civil War, "Dixie" was adopted as a de facto anthem of the Confederacy. New versions appeared at this time that more explicitly tied the song to the events of the Civil War. Since the advent of the American Civil Rights Movement, many have identified the lyrics of the song with the iconography and ideology of the Old South. Today, "Dixie" is sometimes considered offensive, and its critics link the act of singing it to sympathy for the concept of slavery in the American South. Its supporters, on the other hand, view it as a legitimate aspect of Southern culture and heritage.

Kentucky was a border state of key importance. President Abraham Lincoln recognized the importance of the Commonwealth when he declared "I hope to have God on my side, but I must have Kentucky." In a September 1861 letter to Orville Browning, Lincoln wrote "I think to lose Kentucky is nearly the same as to lose the whole game. ... We would as well consent to separation at once, including the surrender of the capital." Kentucky was the site of fierce battles, such as Mill Springs and Perryville. It was host to such military leaders as Ulysses S. Grant on the Union side, who first encountered serious Confederate gunfire coming from Columbus, Kentucky, and Nathan Bedford Forrest on the Confederate side. Forrest proved to be a scourge to the Union Army in such places as the towns of Sacramento and Paducah, where he conducted guerrilla warfare against Union forces. Kentucky, being a border state, was among the chief places where the "Brother against brother" scenario was tragically prevalent. Kentucky was the birthplace of Abraham Lincoln, his wife Mary Todd and his southern counterpart Jefferson Davis.

In 1813 he entered the United States Military Academy at age 15 and graduated 36th in a class of 40 two years later (the customary period of study in that period.) He was commissioned a second lieutenant in the U.S. Light Artillery. Cooper served in numerous artillery units until 1837, when he was appointed chief clerk of the U.S. War Department. Cooper received a brevet promotion to colonel on May 30, 1848, for his War Department service in the Mexican–American War, and was promoted to the permanent rank of colonel in the regular army and appointed the army's Adjutant General on July 15, 1852. Cooper also served very briefly as acting U.S. Secretary of War in 1857.

At the outbreak of the Civil War, Cooper's loyalties were with the South. His wife's family was from Virginia and he had a close friendship with Jefferson Davis, who had also been U.S. Secretary of War.One of his last official acts as Adjutant General of the U.S. Army was to sign an order dismissing Brig. Gen. David E. Twiggs from the army, who had surrendered his command and supplies in Texas to the Confederacy (and who was shortly thereafter made a Confederate major general.) This order was dated March 1, 1861, and Cooper resigned six days later. He and traveled to Montgomery, Alabama, at the time the Confederacy's capital, to join the Confederate States Army.

George Atzerodt, one of the conspirators in the assassination of Abraham Lincoln