Aviation, or air transport, refers to the activities surrounding mechanical flight and the aircraft industry. Aircraft includes fixed-wing and rotary-wing types, morphable wings, wing-less lifting bodies, parachutes, as well as lighter-than-air craft such as balloons and airships. Aviation began in the 18th century with the development of the hot air balloon, an apparatus capable of atmospheric displacement through buoyancy. Some of the most significant advancements in aviation technology came with the controlled gliding flying of Otto Lilienthal; then a largest step in significance came with the construction of the first powered airplane by the Wright brothers in the early 1900s. Since that time, aviation has been technologically revolutionized with the introduction of the jet which permitted a major form of transport throughout the world.

Pan American World Airways, most commonly known as "Pan Am", was the principal international airline of the United States from the 1930s until its collapse in 1991. Originally founded as a seaplane service out of Key West, Florida, the airline became a major company; it was credited with many innovations that shaped the international airline industry, including the widespread use of jet aircraft, jumbo jets, and computerized reservation systems. Identified by its blue globe logo and the use of "Clipper" in aircraft names and call signs, the airline was a cultural icon of the 20th century, and the unofficial flag carrier of the United States. Pan Am went through two incarnations after 1991. The second Pan Am operated from 1996 to 1998 with a focus on low-cost, long-distance flights between the U.S. and the Caribbean. The current incarnation, based in Portsmouth, New Hampshire and known as the Pan Am "Clipper Connection", is operated by Boston-Maine Airways. The airline currently flies to destinations in the northeastern United States, Florida, Dominican Republic, and Puerto Rico.
edit 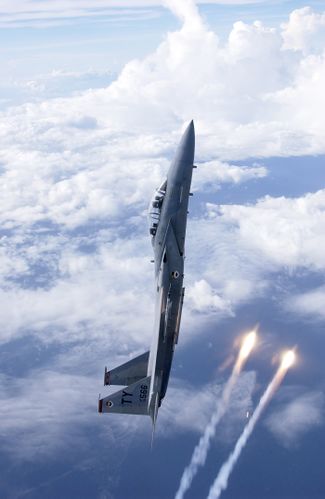 An F-15D Eagle from the 325th Fighter Wing based at Tyndall Air Force Base, Florida releasing flares. The F-15 is a multi-role tactical fighter designed by McDonnell Douglas. The first flight of the F-15A was in July 1972, but since then it has been produced in six model variations with both single seat and dual seat versions. The original and largest operator of the F-15 is the United States Air Force, but it is also operated by the air forces of Israel, Japan, Saudi Arabia and South Korea.

Template:/box-header ...that four planes were simultaneously hijacked in the 1970 Dawson's Field hijackings?

...that Roy Marlin "Butch" Voris, founder of the United States Navy's Blue Angels flight demonstration team, chose the name based on a nightclub advertisement in The New Yorker magazine?

...that Yekaterina Zelenko was the only woman to perform an aerial ramming and the only female pilot in the Winter War? Template:/box-footer 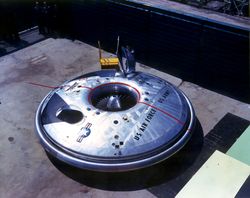 The VZ-9 Avrocar (full military designation VZ-9-AV) was a Canadian VTOL aircraft developed by Avro Aircraft Ltd. as part of a secret U.S. military project carried out in the early years of the Cold War.[1] The Avrocar intended to exploit the Coandă effect to provide lift and thrust from a single "turborotor" blowing exhaust out the rim of the disk-shaped aircraft to provide anticipated VTOL-like performance. In the air, it would have resembled a flying saucer. Two prototypes were built as "proof-of-concept" test vehicles for a more advanced USAF fighter and also for a U.S. Army tactical combat aircraft requirement.[2] In flight testing, the Avrocar proved to have unresolved thrust and stability problems that limited it to a degraded, low-performance flight envelope; subsequently, the project was cancelled in 1961.

Elbert Leander "Burt" Rutan (born June 17, 1943 in Estacada, Oregon) is an American aerospace engineer noted for his originality in designing light, strong, unusual-looking, energy-efficient aircraft. He is most famous for his design of the record-breaking Voyager, which was the first plane to fly around the world without stopping or refueling, and the suborbital rocket plane SpaceShipOne, which won the Ansari X-Prize in 2004.