Conservatism is a political and social philosophy that promotes the maintenance of traditional values, accepting that technology and society can shift, but the principles should not. Some conservatives seek to preserve things as they are, emphasizing stability and continuity, while others oppose modernism and seek a return to the way things were. The first established use of the term in a political context was by François-René de Chateaubriand in 1819, following the French Revolution. Political science often credits the Irish politician Edmund Burke with many of the ideas now called conservative.Template:/box-footer

The College Republican National Committee is a national organization for college and university students who support the Republican Party of the United States. The organization is known as an active recruiting tool for the Republican Party and has produced many prominent Republican and conservative activists and introduced more party members to the Republican party than any other organization in the nation. The College Republicans were founded as the American Republican College League on May 17, 1892 at the University of Michigan. The organization was spear-headed by law student James Francis Burke, who would later serve as a Congressman from Pennsylvania. The inaugural meeting was attended by over 1,000 students from across the county, from Stanford University in the west to Harvard University in the east. Contemporary politicians also attended the meeting, including Judge John M. Thurston, Senator Russell A. Alger, Congressman J. Sloat Fassett, Congressman W. E. Mason, John M. Langston, and Abraham Lincoln's successor in the Illinois State Legislature, A. J. Lester. Then-Governor of Ohio William McKinley gave a rousing keynote speech.
Archive – Read more...

The conservative is a person who considers very closely every chance, even the longest, of "throwing out the baby with the bath-water," as the German proverb puts it, and who determines his conduct accordingly. 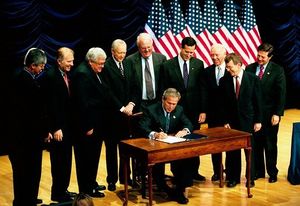 The Partial-Birth Abortion Ban Act of 2003 is a United States law prohibiting a form of late-term abortion that the Act calls "partial-birth abortion", often referred to in medical literature as intact dilation and extraction. Under this law, "Any physician who, in or affecting interstate or foreign commerce, knowingly performs a partial-birth abortion and thereby kills a human fetus shall be fined under this title or imprisoned not more than 2 years, or both." The law was enacted in 2003, and in 2007 its constitutionality was upheld by the U.S. Supreme Court, in the case of Gonzales v. Carhart. On November 5, 2003, after being passed by both the House and the Senate, the bill was signed by President George W. Bush to become law.