The EU traces its origins from the European Coal and Steel Community (ECSC) and the European Economic Community (EEC), formed by the Inner Six countries in 1951 and 1958, respectively. In the intervening years, the community and its successors have grown in size by the accession of new member states and in power by the addition of policy areas to its remit. The Maastricht Treaty established the European Union under its current name in 1993. The latest major amendment to the constitutional basis of the EU, the Treaty of Lisbon, came into force in 2009.

The basis for the commemorative coins derived from a decision of the European Council, which repealed the prohibition of changing the national obverse sides of euro coins from 1 January 2004 onwards.

The face value of the coins, typically is less than their intrinsic value of between €3 and €12. The exceptions are San Marino and the Vatican City, where coins from the former are regularly sold for between €30 and €40, while coins from the latter are very rarely obtained for less than €100. Issued designs are made public in the Official Journal of the European Union.

Madrid is the capital of Spain, and the largest city in Spain. It is located on the river Manzanares in the center of the country, between the Autonomous Communities of Castilla y Leon and Castilla la Mancha. Madrid is also the capital of the Community of Madrid, an uniprovincial Autonomous Community. Due to its geographical location, wealth and history, Madrid is considered one of the financial centers of the Iberian Peninsula, together with Lisbon, and the political center of Spain.

As the capital of the former Spanish Empire, Madrid is a city of great cultural and political importance. While Madrid possesses a modern infrastructure, it has preserved the look and feel of many of its historic neighborhoods and streets. Its landmarks include the huge Royal Palace of Madrid; the Buen Retiro park, opened in 1631; an archaeological museum of international reputation; and three superb art museums. 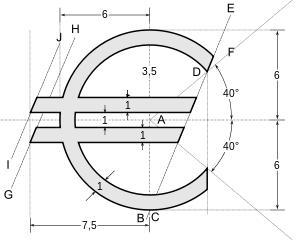 Photo credit: User:Agateller
This diagram illustrates how to draw a euro symbol, based on European Commission documentation.
Archive/Nominations...