Germany is one of the world's most industrialised countries, located in the center of Europe. It is bordered to the north by the North Sea, Denmark, and the Baltic Sea, to the south by Austria and Switzerland, to the west by France, Belgium, the Netherlands and Luxembourg, and to the east by Poland and the Czech Republic.

Germany is a democratic federal parliamentary republic, containing 16 federal states (Bundesländer), which in certain spheres act independently of the Federation or "Bund".

Germany is a developed country with a very high standard of living, and it maintains a comprehensive social security, a universal health care system and diverse environmental protection laws. It is a global leader in several industrial and technological sectors.

The Federal Republic of Germany is a member state of the United Nations, NATO, the G8 nations, and a founding member of the European Union. More...

The Eifel Aqueduct was one of the longest aqueducts of the Roman Empire. It shows the great skill of the Roman engineers, whose level of technical achievement was lost in the Middle Ages and regained only in recent times.

The aqueduct, constructed in AD 80, carried water some 95 km (60 miles) from the hilly Eifel region of what is now Germany to the ancient city of Colonia Claudia Ara Agrippinensium (present-day Cologne). If the auxiliary spurs to additional springs are included, the length was 130 km (80 miles). The construction was almost entirely below ground, and the flow of the water was produced entirely by gravity. A few bridges, including one up to 1,400 m (0.87 miles) in length, were needed to pass over valleys. Unlike some of the other famous Roman aqueducts, the Eifel aqueduct was specifically designed to minimize the above-ground portion to protect it from damage and freezing. More... 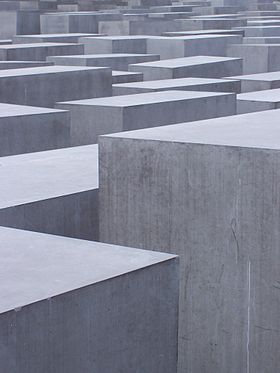 The Memorial to the Murdered Jews of Europe, a Holocaust memorial in Berlin

More Germany-related news in English can be found at Deutsche Welle, Tagesschau, and Der Spiegel.

Things you can do

Here are some tasks you can do: