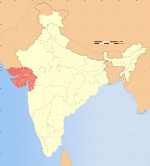 Gujarat is a state and ethno-linguistic region located in western India. It borders Rajasthan and Madhya Pradesh to the north and east and the state of Maharashtra to the south. The Arabian Sea and the international border with Pakistan lie on its western frontier. Gandhinagar is the administrative capital, while Ahmedabad is the largest city of Gujarat. The state is home to as many as 50 million people, or roughly 5 percent of the national population. However, there are also large Gujarati communities in different parts of India and in nations across the world.

In ancient times, Gujarat was home to the Indus era cities of Dholavira and Lothal, which is believed to be the oldest-known port in the world. The Hindu holy city of Dwaraka is located in western Gujarat. The region was perhaps the strongest base of the Indian independence movement and home to Indian leaders such as Mahatma Gandhi and Sardar Patel. The modern state was created on May 1, 1960 out of the Bombay State. It composes of the regions of Saurashtra, Kathiawad, Khambhat and Kutch, which boast their own unique linguistic and cultural traditions. Gujarat is one of the most industrialised and developed states of India, playing a major role in the political, economic and cultural life of the nation. (more)Template:/box-footer

Sardar Vallabhbhai Patel was an Indian freedom fighter, senior political leader and statesman. Inspired by the work of Mohandas Gandhi, Patel organized the peasants of Kheda and Bardoli in Gujarat in non-violent mass civil disobedience against the oppressive tax policies imposed by the British Raj. He served as the President of the Indian National Congress in 1931, and rose to the forefront of rebellions and political events — helping lead Indians into the Salt Satyagraha and the Quit India movement. Becoming the first Home Minister and Deputy Prime Minister of India, Patel took charge of the task to forge a united India from a plethora of semi-independent princely states, colonial provinces and possessions. Patel employed an iron fist in a velvet glove diplomacy — frank political negotiations backed with the option (and the use) of military action to weld a nation that could emancipate its people without the prospect of divisions or civil conflict. His leadership obtained the peaceful and swift integration of all 565 princely states into the Republic of India. Patel's initiatives spread democracy extensively across India, and re-organized the states to help transform India into a modern federal republic with states autonomy. He was also well known as Iron Man of India. (more...) Template:/box-footer 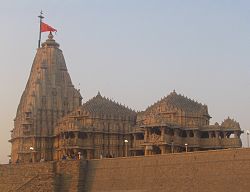 The Somnath Temple located near Veraval in Saurashtra, on the western coast of Gujarat, India is one of the twelve Jyotirling (golden lingas) symbols of the God Shiva and is mentioned in the Rig Veda. Somnath means "The Protector of Moon God". The temple has been rebuilt and destroyed six times in the past. The present temple was built by the Shree Somnath Trust which looks after the entire complex and its environs.