Jainism /ˈdʒeɪnɪzəm/ is an Indian religion that prescribes a path of non-violence towards all living beings. Its philosophy and practice emphasize the necessity of self-effort to move the soul toward divine consciousness and liberation. Any soul that has conquered its own inner enemies and achieved the state of supreme being is called a jina ("conqueror" or "victor"). The ultimate status of these perfect souls is called siddha. Ancient texts also refer to Jainism as shraman dharma (self-reliant) or the "path of the nirganthas" (those without attachments or aversions).

The core principle of Jainism is non-violence. Among the five great vows taken by Jain ascetics, non-violence is the first and foremost. Jains believe in reincarnation; the soul is trapped in the cycle of birth and death (samsara) due to the actions of karmic particles. They emphasize that liberation can be achieved through the three jewels of Right View, Right Knowledge and Right Conduct. According to Jains, reality is multifaceted, and humans can grasp only a partial understanding of reality. This has led to the development of doctrines like Anekantavada (theory of multiple viewpoints), Syadvada (theory of conditional predication) and Nayavada (theory of partial viewpoint). Jains follow the teaching of 24 Tirthankara (ford-makers). Contemporary Jainism is divided into two major sects, Digambara and Svetambara. Template:/box-footer 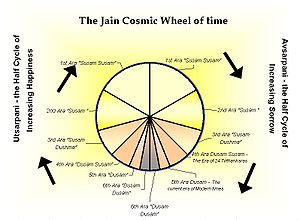 Division of time as envisaged by Jains.

Jain cosmology is the description of the shape and functioning of the physical and metaphysical Universe (loka) and its constituents (such as living, matter, space, time etc.) according to Jainism, which includes the canonical Jain texts, commentaries and the writings of the Jain philosopher-monks. Jain cosmology considers the loka, or universe, as an uncreated entity, existing since infinity, having neither beginning nor end.[1] Jain texts describe the shape of the universe as similar to a man standing with legs apart and arm resting on his waist. This Universe, according to Jainism, is narrow at the top, broad at the middle and once again becomes broad at the bottom.[2]

Mahāpurāṇa of Ācārya Jinasena is famous for this quote: "Some foolish men declare that a creator made the world. The doctrine that the world was created is ill advised and should be rejected. If God created the world, where was he before the creation? If you say he was transcendent then and needed no support, where is he now? How could God have made this world without any raw material? If you say that he made this first, and then the world, you are faced with an endless regression." 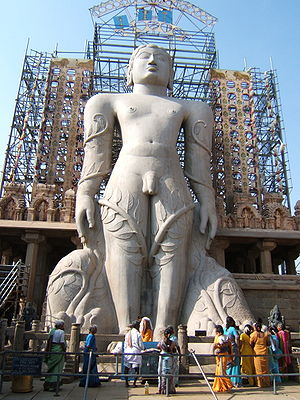 Bahubali (Sanskrit: बाहुबली) also called Gomateshwara (Kannada: ಗೊಮ್ಮಟೇಶ್ವರ Tulu: ಗೊಮ್ಮತಾ) was a Jain monk. According to Jainism he was the second of the hundred sons of the first Tirthankara, Rishabha,and king of Podanpur. The Adipurana, a 10th century Kannada text by Jain poet Adikavi Pampa (fl. 941 CE), written in Champu style, a mix of prose and verse and spread over in sixteen cantos, deals with the ten lives of the first tirthankara, Rishabha and his two sons, Bharata and Bahubali.[3][4]

A monolithic statue of Bahubali referred to as "Gommateshvara" built by the Ganga minister and commander Chamundaraya is situated 60 feet (18 m) above a hill in a place called Shravanabelagola in the Hassan district of Karnataka state, India. It was built in the 10th century AD.[citation needed] Hundreds of thousands of pilgrims, devotees and tourists from all over the world flock to the statue once in 12 years for an event known as Mahamastakabhisheka. On August 5, 2007, the statue was voted by Indians as the first of Seven Wonders of India.[5] 49% votes went in favor of this marvel.