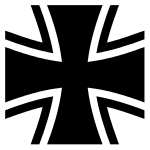 Insignia of the Bundeswehr

listen (help·info)) consists of the unified armed forces of Germany and their civil administration and procurement authorities. The States of Germany are not allowed to maintain armed forces of their own, since the German Constitution states that matters of defense fall into the sole responsibility of the federal government.

By international agreement, the Bundeswehr may not exceed an active strength of 370,000. The Bundeswehr currently has 247,100 active troops. Of these, 188,112 are professional soldiers, 25,566 18–25-year-old conscripts, who used to serve for at least six months, until conscription was ended in January 2011, and 33,417 volunteer conscripts serving a longer military service. In addition the Bundeswehr has approximately 350,000 reserve personnel.

Women have served in the medical service since 1975. From 1993 to 2000, they were also allowed to serve as enlisted personnel and non-commissioned officers in the medical service and the army bands. In 2000, in a lawsuit brought up by Tanja Kreil, the European Court of Justice issued a ruling allowing women to serve in more roles than previously allowed. Since 2001 they can serve in all functions of service without restriction, but they were not subject to conscription. There are presently around 14,500 women on active duty and a number of female reservists who take part in all duties including peacekeeping missions and other operations. In 1994, Verena von Weymarn became Generalarzt der Luftwaffe ("Surgeon General of the Air Force"), the first woman ever to reach the rank of general in the armed forces of Germany. Template:/box-footer 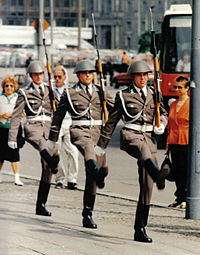 Soldiers of the Guard Regiment Friedrich Engels marching at a changing-of-the-guard ceremony at the Neue Wache on the Unter den Linden in Berlin.

The National People’s Army (NPA) (German: Nationale Volksarmee - NVA) was the name used for the armed forces of the German Democratic Republic.

The NVA was established in 1956 and disbanded in 1990. It did not see any significant combat. Its participation with the Soviet Armed Forces against the Czechoslovak interim government during the Prague Spring of 1968 was cancelled at the last minute. There were frequent reports of East German advisors working with communist African governments during the Cold War.

The National People’s Army was created on March 1 1956, six months after the formation of the West German Bundeswehr, from the Kasernierte Volkspolizei (Barracked People's Police). It was preceded by years of preparation during which former Wehrmacht officers and communist veterans of the Spanish Civil War helped organize and train paramilitary units of the People's Police. With its German appearance—including uniforms and ceremonies patterned after older German military traditions—the doctrine and structure of the NVA were strongly influenced by the Soviet Armed Forces.

During its first year, about 27 percent of the NVA's officer corps had formerly served in the Wehrmacht. Of the 82 highest command positions, 61 were held by ex-Wehrmacht officers; however, very few of them had served in high ranks. The military knowledge and combat experience of these veterans were indispensable in the NVA's early years, although by the 1960s most of these World War II veterans had been retired. The West German Bundeswehr similarly relied on Wehrmacht veterans who initially comprised the majority of its commissioned ranks.

The NVA described itself as the "instrument of power of the working class". According to its doctrine, the NVA protected peace and secured the achievements of socialism by maintaining a convincing deterrent to imperialist aggression. The NVA's motto, inscribed on its flag, was "For the Protection of the Workers' and Farmers' Power." (Read more) 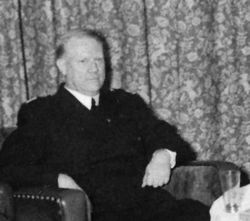 listen); 18 July 1887 – 24 October 1945) was a Norwegian politician. On 9 April 1940, with the German invasion of Norway in progress, he seized power in a Nazi-backed coup d'etat that garnered him international infamy. From 1942 to 1945 he served as Minister-President, working with the occupying forces. His government, known as the Quisling regime, was dominated by ministers from Nasjonal Samling, the party he had founded in 1933. The collaborationist government participated in Germany's Final Solution. Quisling was put on trial during the post-war legal purge in Norway and found guilty of charges including embezzlement, murder and high treason. He was executed by firing squad at Akershus Fortress, Oslo, on 24 October 1945. During World War II, quisling became a synonym for traitor.

The son of a Church of Norway pastor, Quisling blended Christian fundamentals, scientific developments and philosophy into a new theory he called Universism. Before going into politics, he proved himself in the military, joining the General Staff in 1911 and specialising in Russian affairs. He was posted to Russia in 1918, and worked with Fridtjof Nansen during the 1921 famine in the Ukraine, returning to Russia to work with Frederik Prytz in Moscow. When Prytz left in 1927, Quisling stayed on as the Norwegian diplomat responsible for managing British diplomatic affairs. For these services he was appointed a Commander of the Order of the British Empire (CBE) by King George V, though the honour was later rescinded. He returned to Norway in 1929, and served as Minister of Defence during the Agrarian governments (1931–33). Although Quisling achieved some popularity after his attacks on the political left, his party never polled well and was little more than peripheral at the time of his 1940 coup. (Read more)