From Infogalactic: the planetary knowledge core
Jump to: navigation, search
The Piracy Portal

Piracy is a robbery committed at sea, or sometimes on the shore, by an agent without a commission from a sovereign nation. The Golden Age of Piracy occurred mostly in the Caribbean, the American coast, the Indian Ocean, and the western coast of Africa. As British imperialism spread across Europe it brought about many drastic structural changes due to which many sailors and privateers found themselves unemployed. Factors contributing to piracy included the rise in quantities of valuable cargoes being shipped to Europe over vast ocean areas, the weakness of European navies in peacetime, the training and experience that many sailors had gained as conscripts in European navies (particularly the Royal Navy), and the weakness of European government in overseas colonies.

Seaborne piracy against transport vessels remains a significant issue (with estimated worldwide losses of US$13 to $16 billion per year), particularly in the waters between the Pacific and Indian Oceans, off the coast of Somalia, and in the Strait of Malacca and Singapore, which are used by over 50,000 commercial ships a year. A recent surge in piracy off the Somali coast spurred a multi-national effort led by the United States to patrol the waters near the Horn of Africa to combat piracy. While boats off the coasts of North Africa and the Mediterranean are still assailed by pirates, the Royal Navy and the U.S. Coast Guard have nearly eradicated piracy in U.S. waters and the Caribbean.

Jean Lafitte (ca. 1776 – ca. 1823) was a pirate and privateer in the Gulf of Mexico in the early 19th century. He and his elder brother, Pierre, spelled their last name Laffite, but English-language documents of the time used "Lafitte," and this is the commonly seen spelling in the United States, including for places named for him. Lafitte is believed to have been born either in France or the French colony of Saint-Domingue. By 1805, he operated a warehouse in New Orleans to help disperse the goods smuggled by his brother Pierre Lafitte. After the United States government passed the Embargo Act of 1807, the Lafittes moved their operations to an island in Barataria Bay. By 1810, their new port was very successful; the Lafittes pursued a successful smuggling operation and also started to engage in piracy.

Though Lafitte tried to warn of a British attack, the American authorities invaded Barataria in 1814 and captured most of Lafitte's fleet. In return for a pardon, Lafitte helped General Andrew Jackson defend New Orleans against the British in 1815. The Lafittes then became spies for the Spanish and moved to Galveston Island where they developed the colony there. Lafitte continued pirating around Central American ports until he died trying to capture Spanish vessels in 1823. Speculation around his death and life continue amongst historians.

Captain Jack Sparrow is a fictional character portrayed by Johnny Depp, introduced in the film Pirates of the Caribbean: The Curse of the Black Pearl (2003). He appears in the back-to-back sequels, Dead Man's Chest (2006) and At World's End (2007), as well as in a future film, On Stranger Tides (2011). He is the main protagonist in all the films. He is also the subject of a children's book series, Pirates of the Caribbean: Jack Sparrow, which chronicles his teenage years, and the character's image was introduced into the theme park ride that inspired the films when it was revamped in 2006. The character has also appeared in numerous video games. Sparrow is one of the Brethren Court, the Pirate Lords of the Caribbean Sea and can be treacherous, surviving mostly by using wit and negotiation rather than weapons and force; although he will fight if necessary, he tries to flee most dangerous situations. Sparrow is introduced seeking to regain his ship, the Black Pearl from his mutinous first mate Hector Barbossa, and attempts to escape his blood debt to the legendary Davy Jones while battling the East India Trading Co. (more...)

More did you knows...
edit 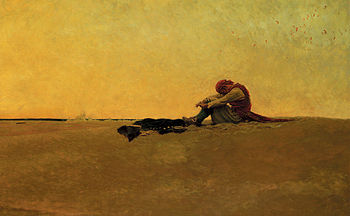 Howard Pyle's illustration of pirate marooning. Marooning is leaving someone behind on purpose in an uninhabited area, such as an uninhabited island. The chief practitioners of marooning were 17th and 18th century pirates, to such a degree that they were frequently referred to as "marooners." The pirate articles of captains Bartholomew Roberts and John Phillips specify marooning as a punishment for cheating one's fellow pirates or other offenses.