Politics are the process and method of gaining or maintaining support for public or common action, the conduct of decision-making for groups. Although it is usually applied to governments, political behavior is also observed in corporate, academic, religious, and other institutions. Political science is the field devoted to studying political behavior and examining the acquisition and application of power, or the ability to impose one's will on another. Its practitioners are known as political scientists. Political scientists look at elections, public opinion, institutional activities (how legislatures act, the relative importance of various sources of political power), the ideologies behind various politicians and interest groups, how politicians achieve and wield their influence, and so on.

A 2007 concert in Minsk hosted by the BRSM

The Belarusian Republican Youth Union is an organized youth group in the Eastern European country of Belarus. The goals of the BRSM are to promote patriotism and to instill individual moral values into the youth of Belarus, using activities such as camping, sporting events and visiting memorials. The organization, which was created by a merger of other youth groups in 2002, is the successor of the Leninist Communist Youth League of the Belorussian SSR. While it is only one of a few youth groups inside Belarus, it is the largest and receives much backing from the Belarusian government. The BRSM has been accused of using methods of coercion and empty promises to recruit members and of being used as a propaganda tool by the Lukashenko Government. 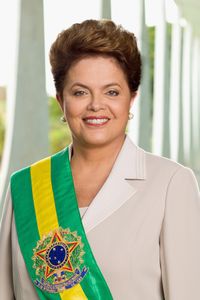 Dilma Vana Rousseff is the 36th and current President of Brazil. This is her official photograph on taking up the presidency.

Ramón Emeterio Betances was a Puerto Rican nationalist. He was the primary instigator of the Grito de Lares revolution and, as such, is considered to be the father of the Puerto Rican independence movement. Betances was also the most renowned medical doctor and surgeon of his time in Puerto Rico, and one of its first social hygienists. He had established a successful surgery and ophthalmology practice. Betances was also a diplomat, public health administrator, poet and novelist. He served as representative and contact for Cuba and the Dominican Republic in Paris. A firm believer in Freemasonry, his political and social activism was deeply influenced by the group's philosophical beliefs. His personal and professional relationships (as well as the organizational structure behind the Grito de Lares, an event that, in theory, clashes with traditional Freemason beliefs) were based upon his relationships with Freemasons, their hierarchical structure, rites and signs.

Wikinews on Politics and conflicts