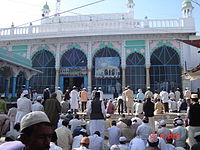 An outside view of the Sufi Shrine at Ajmer Shareef,India 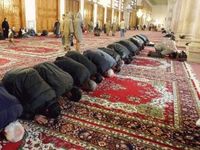 Sufism is a mystic tradition that found a home in Islam encompassing a diverse range of beliefs and practices dedicated to Allah/God, divine love and sometimes to help a fellow man. Tariqas (Sufi orders) may be associated with Sunni Islam, other currents of Islam, or a combination of multiple traditions. It has been suggested that Sufi thought prominently emerged from the Middle East in the eighth century, and adherents are now found around the world. Sufism is neither a new religion nor a cult, neither a doctrine nor a dogmatic institution. Perhaps one could say that Sufism is the same religion of the heart that has always been, ever since wisdom was wisdom. Esoteric schools can be traced as far back as the time of Abraham, and even earlier.

Template:/box-header Ahmed Raza Khan Fazil-e-Barelvi (Urdu: احمد رضاخان‎, Hindi: अहमद रज़ा खान) (1856–1921 CE), popularly known as ala Hazrat, was a Sunni Hanafi scholar who founded the Barelvi movement of South Asia.Ahmed Raza Khan Barelvi belonged to the Barech tribe of Durrani Pushtuns. The Barech formed a tribal grouping among the Rohilla Pushtuns of North India who founded the state of Rohilkhand. The ancestors of Ahmed Raza Khan migrated from Qandahar during the Mughal rule and settled in Lahore.Ahmad Raza Khan was born on 14 June 1856 in Muhallah Jasoli, Bareilly Sharif, British India. His birth name is Muhammad, Khan used the appellation "Abdul Mustafa" (slave [or servant] of Mustafa) prior to signing his name in correspondence.

Behold! Verily on the friends Of Allah (GOD) there is no fear, nor shall they grieve; those who believe and (Constantly) guard against evil. For them is Glad Tiding, in the life of the Present, And in the Hereafter: No change can there be in the Words of Allah (GOD). This is indeed the supreme Felicity. [10:62]

None one can be its guardian except Al-Muttagun (The pious, Saints) But most of them know not. [8:34]

Verily, he who has purified the Nafs has attained victory, and he who has despoiled it has lost.

That day of Qiyamat (the day of doom) neither wealth nor sons will benefit anyone, but that person who comes to Allah with a reformed hearts. Template:/box-footer

More about Islam in Bangladesh...

"I am Hassani and my abode is my cell,
And my feet are on the neck of each Saint.
Abdul Qadir is my famous name.
And my ancestor is one possessed of an insight Perfect."