According to the United States Census Bureau, the town has a total area of 59.3 square miles (154 km2), of which, only 23.2 square miles (60 km2) (39.14%) of it is land and 36.1 square miles (93 km2) (60.86%) of it is water. Most of its land area lies on Aquidneck Island, which it shares with Middletown and Newport. In addition, Portsmouth encompasses some smaller islands, including Prudence Island, Patience Island, Hope Island, and Hog Island.

Portsmouth was settled in 1638 by a group of religious dissenters from Boston Colony, including Dr. John Clarke, William Coddington, and Anne Hutchinson. It is named after Portsmouth, Hampshire, England. Roger Williams convinced the settlers that they should go there, instead of settling in New Jersey, where they had first planned on going. It was founded by the signers of the Portsmouth Compact. Its original Indian name was Pocasset. It was officially named Portsmouth on May 12, 1639.

Portsmouth is the site of one of the earliest and most bizarre murder trials. In 1673 Rebecca Cornell, widow of Thomas Cornell (settler), died in a house fire. Her son Thomas(Jr.) was accused, tried, convicted and hanged for the "crime." In addition to there being only circumstantial evidence presented against Thomas, and a number of other potential suspects (including Thomas' wife and a local Native American) and the possibility that Rebecca simply caught fire trying to stay warm near a fireplace, an alleged visit of the ghost of Rebecca to a testifying relative (known as Spectral evidence, which was also admissible evidence in the Salem witch trials) was admitted as solid evidence in the case. This practice of using dreams and apparitions as evidence was subsequently abandoned. This case and its history has been chronicled in the book Killed Strangely: The Death of Rebecca Cornell by Elaine Forman Crane.[3][4]

Portsmouth is the site of an important capture during the American War for Independence. Lieutenant Colonel William Barton of Rhode Island captured the British Commander at Rhode Island, General Richard Prescott there. It is also the site of Rhode Island's only major battle in that war on Butt's Hill. Nearby Founder's Brook is said to have run red with the blood of fallen British soldiers on August 29, 1778. During the Battle of Rhode Island the 1st Rhode Island Regiment, which was composed mostly of African-American soldiers, served in the army of General John Sullivan. 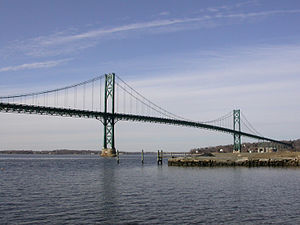 Since 1980, Portsmouth has been home to Clements' Market, a large supermarket. In addition, Portsmouth is home to the Portsmouth Business Park, as well as a few small plazas with a variety of businesses. Portsmouth is also home to a branch of Raytheon, and its Integrated Defense Systems department.

There were 6,758 households out of which 33.4% had children under the age of 18 living with them, 61.1% were married couples living together, 8.0% had a female householder with no husband present, and 28.0% were non-families. 23.3% of all households were made up of individuals and 10.0% had someone living alone who was 65 years of age or older. The average household size was 2.53 and the average family size was 3.00. 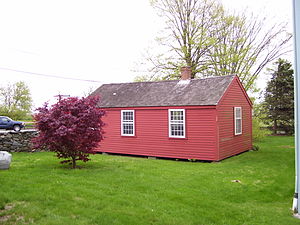 The 1725 schoolhouse owned by the Portsmouth Historical Society is one of the oldest surviving in the U.S.