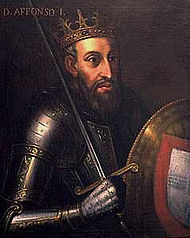 King Afonso I, the first King of Portugal

The younger Henry, having little chance of inheriting any land or titles, had joined the reconquista in the Iberian Peninsula in the late 11th century. After conquering parts of Galicia and northern Portugal on behalf of Alfonso VI of León, he married Alfonso's illegitimate daughter, Teresa, and was given the County of Portugal as a fief under the Kingdom of León. His son, Afonso Henriques, became King of Portugal after defeating his mother in the Battle of São Mamede in 1128. It was only in 1179 that Pope Alexander III recognized Portugal as an independent state,[1] recognition, at the time, needed for total acceptance of the kingdom in the Christian world.

The kings that succeeded Afonso I continued the Reconquista of the Iberian Peninsula against the Moors. Afonso III conquered the Algarve and adopted the title of King of Portugal and the Algarve.

The borders of Portugal were defined in the Treaty of Alcanizes (1297) when king Dinis I, son of Afonso III, started developing the kingdom's land.

In 1383 Beatrice, princess of Portugal and heir to the throne married John I of Castile. When Ferdinand I (her father) died during the same year the kingdom entered a period of anarchy called the 1383-1385 Crisis, threatened with a possible annexation by Castile. This period ended in 1385 with the victory of the Portuguese in the Battle of Aljubarrota and a new dynasty began with John I, Master of Aviz (illegitimate son of Peter I), thus called the House of Aviz.

Coats of Arms of Titles