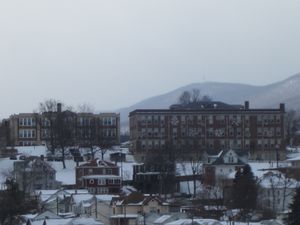 The school was founded in 1901 as the sub-collegiate Keyser Preparatory Branch of West Virginia University. It was soon renamed as the West Virginia Preparatory School. Eventually, it evolved into a full junior college, taking students from the local area and also students from elsewhere in the state who did not meet the full admission requirements for the main campus. Potomac State has since largely moved out of its remedial role, offering many courses that directly transfer to the main campus with partial credit.

After decades as a regional campus of West Virginia University, Potomac State became a semi-integrated division of the University on July 1, 2005.[4] Many non-academic services at Potomac State have now come under the control of main campus.

Potomac State College athletics teams are known as the Catamounts,[5] named after the cougar and mountain lions that once roamed the Potomac Highlands of West Virginia. Potomac State is a member of the Western Pennsylvania Collegiate Conference, super-entity of the Pennsylvania Collegiate Athletic Association (PCAA), in partnership with the National Junior College Athletic Association (NJCAA), and competes against other two-year colleges throughout the eastern United States. In October 2013, Catamounts Soccer was ranked 9th in NJCAA Division III. Catamounts Baseball competed in the NJCAA Division I World Series as the 2011 Eastern District Champions.[6] In 2013, the baseball team finished the season ranked 19th in Division I.[7] In March 2014, Catamounts Men's Basketball won their regional championship, which qualified them for the 16-team NJCAA Division II National Championship Tournament. The "Cats" won a game before being eliminated. s.[8]