Not to be confused with Pottstown, Pennsylvania

Pottsville is a city in, and the county seat of, Schuylkill County, Pennsylvania, United States.[1] The population was 14,324 at the 2010 census, and is the principal city of the Pottsville, PA Micropolitan Statistical Area. The city lies along the west bank of the Schuylkill River, 97 miles (156 km) north-west of Philadelphia. It is located in Pennsylvania's Coal Region.

Charles II granted the land that eventually became Pottsville to William Penn. The grant comprised all lands west and south of the Delaware and the Schuylkill; the site of Pottsville was originally in Chester County. When the legislative Council, on May 10, 1729, enacted the law erecting Lancaster County, Pennsylvania, which included all the lands of the Province lying westward of a straight line drawn northeasterly from the headwaters of Octorara Creek (near the southern borders) marked with blazed trees, to the Schuylkill River, then this placed Pottsville in Lancaster County. By enactment of the same Council, approved on March 11, 1752, Berks County was erected; this placed Pottsville within the limits of that county.

Pottsville's anthracite coal history began in 1790 when a coal seam was discovered by hunter Necho Allen. Legend has it that Allen fell asleep at the base of the Broad Mountain and woke to the sight of a large fire; his campfire had ignited an outcropping of coal. By 1795 an anthracite-fired finery forge was established on the Schuylkill River.[citation needed] 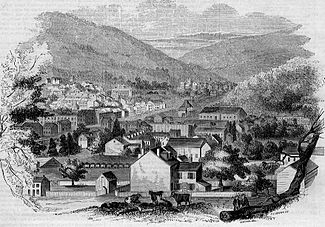 In 1806 John Potts[2] purchased the forge. By an act of Assembly of the Commonwealth approved March 1, 1811, the County of Schuylkill was erected out of portions of Berks and Northampton; this placed the site of Pottsville in Schuylkill County. The town was formally laid out in 1816 by a local surveyor, Henry Donnell. Pottsville was established as a village in Norwegian Township in 1819 and incorporated as a borough on February 19, 1828.

In 1829, D.G. Yuengling & Son established what is now the oldest operated family beer brewery in the United States. In 1851 Pottsville became the county seat, the original county seat being Orwigsburg.[3]

The Philadelphia and Reading Coal and Iron Company, which has its roots in the Philadelphia and Reading Railway Company, the remnants of which were acquired in the late 20th century by the Reading Anthracite Company, acquired extentive coal lands and would become one of the most notable of the coal companies operating in Pennsylvania until the demise of the anthracite industry after World War II.

Because of its location along the Schuylkill River, Pottsville developed a small textile industry. Out of this industry grew the Phillips Van Heusen company which was founded in 1881. Moses Phillips and his wife Endel began sewing shirts by hand and selling them from pushcarts to the local coal miners. Van Heusen and other textile companies left the region starting in the late 1970s, mainly as a result of foreign competition. Another element of the textile industry was the Tilt Silk Mill on Twelfth Street, which produced silk from silk worms imported from China which fed on mulberry trees in the building's solarium. The silk business eventually was eclipsed by the development of nylon stockings. The building still stands and is presently the headquarters of a storage and vehicle rental business.

During the Prohibition period in the United States, under the 18th Amendment, Yuengling stopped making beer and moved to production of "near beer". The three brews produced in this time were the Yuengling Special (the most popular brand), Yuengling Por-Tor (a version of their "celebrated Pottsville Porter"), and finally, the Yuengling Juvo, which was a cereal beverage. Then-owner Frank Yuengling also opened the Yuengling Dairy, which produced ice cream and other dairy products for the local area. These ventures helped to keep the company afloat during that period.

When the 18th Amendment was repealed, Yuengling stopped production of "near beer" and resumed making alcoholic beverages. The brewery famously sent a truckload of its Winner Beer to the White House in 1933 as thanks to President Franklin D. Roosevelt for the repeal of Prohibition. Yuengling still continues its family-owned business today. It is the second largest American-owned brewery, after the Boston Beer Company, producer of Samuel Adams beer. The Yuengling Dairy was operated by a different branch of the family from the Brewery. Business declined and the dairy folded as of 1985. Attempted buyouts by large conglomerate breweries have all been unsuccessful. 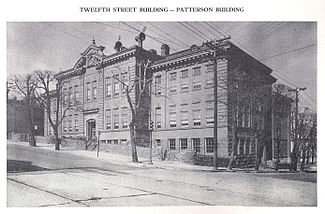 Pottsville was chartered as a third-class city on March 22, 1911.

Pottsville was host to a National Football League franchise from 1925-1928. The Pottsville Maroons played in Sportsman's Park (or Minersville Park) in nearby Minersville, now the site of King's Village shopping plaza. The Maroons posted some of the best records in the NFL during the 1925 and 1926 seasons. The Maroons had a claim to the 1925 NFL championship, but because of a controversial decision by NFL President Joe Carr, the title was instead awarded to the Chicago Cardinals. The Maroons suffered two more losing seasons before relocating to Boston and becoming the Boston Bulldogs. The Bulldogs folded in 1929.

Until the middle of the 20th century, Pottsville was a popular destination for many traveling acts and vaudeville performers. The 1929 film Berth Marks stars the comedy legends Laurel and Hardy as they attempt to reach Pottsville by train for one of their booked performances. Pearl Bailey had once resided in Pottsville during the early part of her entertaining career.[citation needed] Soldiers in training at nearby Fort Indiantown Gap were prohibited from visiting Pottsville during most of World War II due to the large amounts of illicit venues and activities present during the time.[citation needed]

In August 1997, the Pottsville Railway Park Little League all star team participated in the Little League World Series in Williamsport, Pennsylvania, representing the U.S. East Region. In the World Series, they defeated Dyer, Indiana 1-0 in an extra inning game. The following evening they played and lost to Bradenton, Florida at Lamade Stadium before an estimated 35,00 fans, the largest crowd ever to watch a non-championship game[citation needed] The team played their final game against Mission Viejo, California, losing 3-1 and finished one game shy of the United States Championship Game.

The city completed in 2007 a streetscaping project on Centre Street. In June 2011, the City of Pottsville became the county's transportation hub for STS (Schuylkill Transportation System) bus service throughout the county with the $16.1 million Union Station Intermodal Transit Center at 300 S. Centre Street.[5] It also accommodates Trailways and Greyhound bus services. 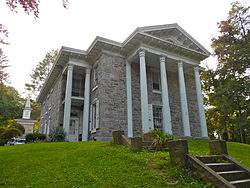 The City of Pottsville has many points of interest, including: 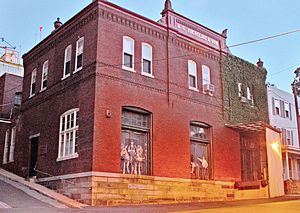 Pottsville fielded a team in the National Football League between 1925 and 1929 called the Pottsville Maroons.

The Pottsville Crimson Tide football team is one of the oldest prep football programs in the country[citation needed] . At the end of the 2007 football season, Pottsville had played 1137 games, which tied them for first in the nation among prep games played.[citation needed]

Pottsville once hosted a home game for the New York Giants.[citation needed]

Pottsville's Fire Department is mostly volunteer. The only non-volunteer positions are the fire chief and four assistant chiefs.

The following is a list of fire companies in the city.

The Republican & Herald is the only local daily newspaper serving Pottsville. There are also three radio stations broadcasting from Pottsville.

Dial telephone service came to Pottsville on August 30, 1956 with Mayor George Heffner making the first call on the new MArket 2 exchange, which still exists. Since then five exchanges have been added to serve the city.

Passenger train service between Pottsville, Reading and Philadelphia[13] was operated by Conrail under the auspices of SEPTA until July 29, 1981. The station site has since been demolished and replaced with a parking lot.

Schuylkill Regional Medical Center is a non-profit affiliation between two community hospitals formerly known as Good Samaritan Regional Medical Center and The Pottsville Hospital and Warne Clinic, both of which are located in Pottsville. On August 1, 2008, Schuylkill Health became the new parent organization for both facilities and their related health systems.[14] The medical center is designated a Level III Trauma center by the Pennsylvania Trauma Systems Foundation.[15]

Norwegian Street divides north and south in the city; Centre Street divides east and west. Since the city is built on steep hills, the street layout is more complex. 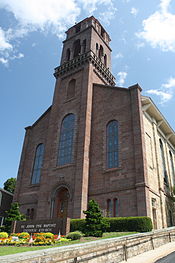