From Infogalactic: the planetary knowledge core
(Redirected from Pradakshina)
Jump to: navigation, search
This article is about the religious practice. For other uses, see Parikrama (disambiguation). 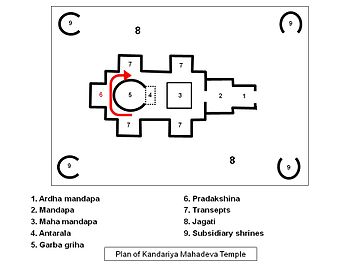 Clockwise parikrama inside a temple (red). 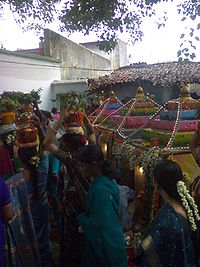 Parikrama at the temple

Parikrama or Pradakshina refers to circumambulation of sacred places in Hindu, Jain or Buddhist context. Parikrama means "the path surrounding something" in Sanskrit, and is also known as Pradakshina ("to the right"), representing circumambulation.[1] Both words are mostly used in the context of religious deities in a temple, sacred rivers, sacred hills and a close cluster of temples, and "doing a parikrama" as a symbol of prayer is an integral part of Hindu worship.[1][2][3]

There could be one surrounding the main deity, other paths could be broader being concentric to the main path. However, it is not uncommon to find non-concentric parikrama paths in a single temple structure. At times the outermost parikrama path covers the whole village/town/city, thereby implying that the length of the path can stretch.[2]

Typically, Parikrama is done after the completion of traditional worship (puja) and after paying homage to the deity. Parikrama is supposed to be done with a meditative mood. 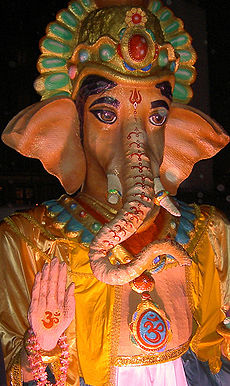 Ganesha statue in London at Diwali

A legend related to goddess Parvati (Shiva's wife) and her two sons illustrates the importance of Pradakshina or Parikrama. It is said that the goddess asked her two sons to circumambulate the universe to gain worldly knowledge. While her first son kartikeyan spent decades to go round the world on his peacock, his second son Ganesha walked a full circle around his mother and justified his action by stating that the World was contained within th figure of the mother. This legend justifies the importance that Hindus attach to the practice of Parikrama, and also the importance of motherhood in Hindu psychology. Another (patriarchal) version of the same story replaces the figure of Parvati with Shiva himself. [5]

Speciality of Pradakshina in Shiva temples

In Shiva temples, the devotees start the Pradakshina as usual from the front and go clockwise till they reach the gomukhi (the outlet for abhisheka water) from the Sanctum Sanctorum. As usual the clockwise perambulation is maintained outside of the Bali stones. The drainage outlet for the ritual ablution offered on the Shiva Linga with water, milk, curd, coconut water, ghee, ashes (bhasma)etc. is not to be crossed. So the worshippers have to return in anti-clockwise direction till they reach the other side of the drainage outlet to complete the circle. During this anti-clockwise perambulation, the devotee should tread a path inside of the Bali stones. The Bali stones are always to be kept the right side of the devotees. After reaching the drainage oulet, they have to return to the front in the clockwise direction keeping the path outside the Bali stones. Thus one Pradakshina is completed.

The importance of the Narmada River as sacred is testified by the fact that the pilgrims perform a holy pilgrimage of a Parikrama or Circumambulation of the river. The Narmada Parikrama, as it is called, is considered to be a meritorious act that a pilgrim can undertake. Many sadhus (saints) and pilgrims walk on foot from the Arabian Sea at Bharuch in Gujarat, along the river, to the source in Maikal Mountains (Amarkantak hills) in Madhya Pradesh and back along the opposite bank of the river. It is a 2,600-kilometre (1,600 mi) walk.[13] The Parikrama is also performed along the southern bank from its source (Amarkantak hills) to the mouth (Bharuch) and returning along the northern bank, and it is considered to be of the highest religious efficacy.[14]

During the Narmada Parikrama, devotees have to pass through a place called Shulpaneshwar ki Jhari, a religious place in Gujarat with links dating back to the Mahabharata epic story. The legend says that the Pandavas returning victorious from Kurukshetra war were intercepted at Shulpaneswar by Eklavya and his group of tribal Bhils and looted them (Pandvaas) of all their belongings. Since then it is a custom that pilgrims on a Narmada Parikrama, while passing through this place, expect to be stripped of all their belongings leaving them with the bare essentials to carry on till some philonthropists give them donations on the way to carry on. With construction of the Sardar Sarovar Dam in Gujarat on the Narmada River, the Shulpaneshwar Temple has submerged under the reservoir, necessitating the pilgrims to take a circuitous route to continue on their journey.[15] 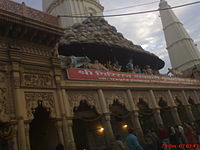 Govardhan hill which has great religious significance in view of its association with Lord Krishna, presently at its highest point is just 25-metre (82 ft) high and is a wide hill near Mathura Vrindavan in Uttar Pradesh, India. It is a narrow sandstone hill known as Giriraj which is about 8 kilometres (5 mi) in length.[16] After Krishna protected the inhabitants of Vraj Vridavan from the wrath of Indra, he counseled them to worship Govardhana hill and they did by way of a Puja (worship) and a Parikrama (circumambulation) around the hill.Thus, a festival in commemoration of the lifting of Mount Govardhan, near Mathura, by Krishna came into vogue as 'Govardhan Puja' when Mount Govardhan is worshipped, the day after Deepawali (festival of lights) is celebrated. Pious people keep awake the whole night and cook 56 (or 108) different types of food for the bhog (the offering of food to God) to Krishna. This ceremony is called 'ankut' or 'annakuta' which means a mountain of food. Various types of food – cereals, pulses, fruit, vegetables, chutneys, pickles, and salads – are offered to the Deity and then distributed as 'prasada' to devotees. Thousands of devotees bring offerings for Giriraj. Followed by this pooja, the devotees perform the Govardhana Parikrama.[16]

Govardana Parikrama [circumambulation — going 21 kilometres (13 mi) around the hill] is a sacred ritual performed by many believers as spiritual purification. There is no time limit for performing this Parikrama, but for those who perform the dandavata (full prostration) Parikrama, an arduous form which may take weeks and sometimes even months to complete. Dandavata Parikrama is performed by standing in one spot, offering obeisances like a stick (danda) by lying flat on the ground and then continuing, contiguously, till the entire route is covered. It is also said that some sadhus (Hindu holy men) perform 108 obeisances in one spot before moving to the next. This can take a number of months to complete.[16]

This ritual of Parikrama is considered to be even better if is it done with milk. A clay pot filled with milk, with a hole at the bottom, is carried by the devotees in one hand and a pot filled with dhoop (incense smoke) in another. An escort continuously fills up the pot with milk till the parikrama is completed. Parikrama is also done with candy being handed out to children, en route.[17] The divine tree 'Kalpavriksha' planted by GreenMan Vijaypal Baghel at each Kunda of this parikrma route, not only Kalpavriksha, he is planting with dedication much more others traditional & medicinal flora's species around holy Govardhan hill likely 'Tridev Vriksha', paras peepal, Rudraksha, Kadmba, pakad, vat vriksha etc who have spiritual and religious values to make Green Parikrma. Parikrama of Govardhana hill starts at the Manasi-Ganga Kund (lake) and then after having darsan of Lord Harideva, from Radha-kunda village, where the Vrindavan road meets the parikrama path. After parikrama of 21  kilometres, covering important tanks, shilas and shrines such as Radha Kunda, Syama Kunda, Dan Ghati, Mukharavinda, Rinamochana Kunda, Kusuma Sarovara and Punchari, it ends at Mansi Ganga Kund only.[16] 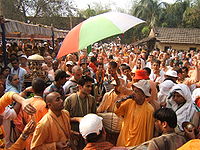 Vrindavan Parikrama is a spiritual walk undertaken by devotees around Vrindavan town in Uttar Pradesh. It has no particular start or end place. As long as you end at the same place you start, the purpose is served. One possible path is to start from the famous ISKCON temple, covers a distance of 10 km (6.2 mi)in about three hours. It is generally done on Ekadasi (eleventh lunar day of the waxing and waning of Moon). The route followed is from ISKCON temple, walk close to the Krishna Balarama Temple, the Krishna-Balarama tree, Gautam Rishi's Ashrama (located on the left while on the right is Varaha Ghata), the Kaliya Ghata, Madana Mohana Temple with red sandstone tower, small wooden bridge, to Imli Tala, the Imli Tala tree, Sringara Vata (on the right), the Kesi Ghat (one of the famous Monuments in Vrindavan), the Tekari Rani temple, the Jagannatha temple and the small temple of Lord Chaitanya Mahaprabhu and in the final stretch cross the Mathura-Vrindavan road. After crossing this road, after another 1 km walking, reach the starting point of the Parikrama. During the Parikrama, one chants the mantras (Jap or Hymns ) within, uses body power (Tap) to accomplish the Parikrama and keeps a fast (not eat anything) (Vrata) till the Parikrama is completed.[18]

In the temple city of Ayodhya in Uttar Pradesh, India, Panchkosi Parikrama is performed over a two-day period. Devotees first take a holy dip in the Saryu River and then do a Parikrama of 15 km along the periphery of the city. It is said that over two hundred thousand devotees including around 50 thousand sadhus from Prayag (Allahabad), Haridwar, Mathura and Kashi (Varanasi) participate in the parikrama, and full security arrangements are made for the religious occasion.[20]

Lili Parikrama or Girnar Parikrama is a seven-day festival held at Mount Girnar in Junagadh district of Gujarat, India. The pilgrimage involves a climb of 4,000 steps to reach the top to the sacred Mount Girnar venerated by both Hindus and Jains. The Jains call it Mount Neminath. Devotees from all over the country participate in the festival. Of the seven peaks of Girnar, five are important viz., Ambamata, Gorakhnath, Augadh, Guru Dattatreya and Kalika. Bhavnath Shiv temple, Bhartruchari cave, Sorath Mahal, Bhim Kund and Shiv Kund. Devotees visit these sacred places during the parikarama.[21]

The temple structure reflects the symbolism of the Hindu association of the spiritual transition from daily life to spiritual perfection as a journey through stages. Parikrama paths are present through which worshipers move in a clockwise direction, starting at the sanctuary doorway and moving inward toward the inner sanctum where the deity is enshrined. This represents translation of the spiritual concept of transition through levels in life into bodily movements by the worshipers as they move inwardly through ambulatory halls to the most sacred centre of spiritual energy of the deity.[22]

Shayana Pradakshinam is done in a lying posture. It starts with a Sashtanga Namaskara in front of the sanctum sanctorum. In Sashtanga Namaskara, the devotees have eight parts of their bodies touching the ground. Thus forehead, chest, shoulders, hands and knees touch the ground. The folded hands will be directed always towards the deity. In this pose, the devotees circumambulate on the Pradakshina path. The relatives and friends of the devotees help them to roll around.

For each deity, the minimum number of Pradakshinas to be done are specified.[citation needed]

The Swayambhu Agama says that doing Pradakshina 21 times to any deity is sanctified.[citation needed]

Similarity and difference with Islam

Like Parikrama in Hinduism, Muslims perform circumambulation around Kaaba during their Hajj which they call tawaf.[23] The circumambulation during Hajj is done in a counterclockwise manner.[24] Hindu and Buddhist traditions, in contrast, circumambulate clockwise.[10] 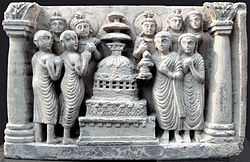 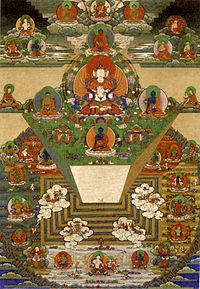 In the Buddhist religious structure, since early days, Circumambulation or Pradakhshina has been an important ritual. Sacred structure, stupa or images have essentially a pradakhshina path around it. A mandapa (prayer hall), added in the front transforms the original stupa into the stupa shrine — as a sacred entity which requires a circumambulatory path around it for the purpose of worship. The whole structure is planned in such a way that it becomes the centre of the mandala and symbolically represents Mount Meru.[25]