The prepared-core technique is means of producing stone tools by first preparing common stone cores that can then be shaped into the desired implement.

Although there had been different types of tools created prior to this technique, mostly that of handaxes and cleavers, this new technique was a great advancement for early man. Believed roughly to have been first used 200,000 years ago this technique involved a removal of flakes from a piece of stone to achieve desired shape and thickness. The use of this technique is believed to be a significant change in culture and shows an increasing growth of cognitive ability, as one that is using this method must be able to imagine the end product and maintain that image while conditioning the stone to the desired shape and end result tool. 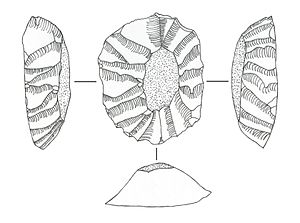 An example of a core prepared through centripetal reduction, with the direction of flaking towards the center of the core.

Centripetal or radial core reduction technology encompasses a substantial range of archaeological variability, using pieces of raw material with natural convexities just as well as heavily prepared centripetal cores. The technique is defined by the characteristic direction of percussion from the perimeter of the core towards the centre, hence the term "centripetal". The perimeter of the circular to oval-shaped core served as a platform for striking off flakes, blades and points, which further shaped the face of detachment.

Several technological criteria characterise the definition of the centripetal cores.

The making of a Levallois Point

The recognition of Levallois as a distinct core reduction strategy dates to the late 19th Century. The term was used to describe specific flakes with certain surface attributes that were recovered during that period in northern France. These early descriptions were purely typological and based on the morphology of the flake products themselves. However, there was never a great deal of consensus among scholars, which typological attributes could be used to identify Levallois products. Gradually, more and more emphasis was put on the idea that Levallois flakes were the products of a particular method or process of production. Indeed, F. Bordes emphasised that Levallois was essentially a method and not a particular product. However, the shape and character of a Levallois blank is also thought to be "predetermined" by the elaborate Levallois core preparation process . While a shape control system undoubtedly exists for the Levallois cores, there remain a number of significant problems. Indeed, how applied force will propagate through a specific core is determined by a number of variables and not only by the will or the desire of the Middle Palaeolithic flintknapper. Fracture mechanic variables include size, shape and internal structure of a particular flint nodule, but also the mass and resilience of the hammer stone and finally the angle and force of the blow and the shape of the core's striking platform. Given the imprecision of hand-eye co-ordination , a rather high probability for only partial core reduction success is very real. Not only are there a number of significant problems with defining Levallois on the basis of predetermined blanks, but there is also considerable disagreement over what set of attributes should be used to characterise a Levallois product. Furthermore, it has also been demonstrated that very different core reduction strategies can produce seemingly diagnostic Levallois blanks.

The generally accepted criteria for a prepared-core to be categorized as a Levallois core are as follows: (1) core is organized in terms of two intersecting flaking surfaces; (2) the flaking surfaces have a hierarchical relationship, striking platform and primary reduction surface; (3) the shape of the primary reduction surface is such that the flake morphology is predetermined; (4) the fracture plane is sub-parallel to the intersection of the two previously mentioned surfaces; and (5) the striking platform is adjusted for removal of flakes that are parallel to the fracture plane, this is usually done through retouch and faceting. [1] 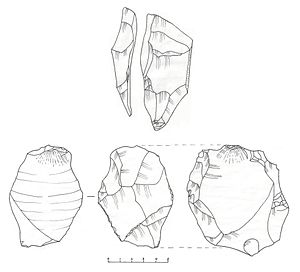 An example of Preferential Levallois flake and core.

There are thus serious problems and implications of the now widely accepted processual definition of the Levallois method. The presence of the Levallois criteria on a blank or a core do no longer necessarily guarantee the real Levallois character of a specific core reduction. So, we should not only study flakes and cores, since blanks and cores cannot be identified as Levallois by their own morphology. We should thus also try to reconstruct the dynamic reduction process by refitting. However, many Middle Palaeolithic assemblages do not allow these extensive reconstructions. So, analysis based on discarded cores and flakes can be problematic, since most of the flaking patterns that preceded a core's discard are simply not observable on them. But, if we cannot be sure of the status of a seemingly diagnostic "Levallois" product, can we then be sure of the Levallois or non-Levallois intent of the core reduction process? The centripetal or radial core reduction scheme, which is used in this study, functions independently of the other characteristics, which define the Levallois method. In Levallois and non-Levallois centripetal core reduction, flakes are struck from the perimeter of the core towards the centre. This is the only attribute, which both reduction strategies have in common. Three major variants within the centripetal core reduction strategy are distinguished: (1) unipolar [one striking platform], (2) bipolar [two opposed striking platforms] and (3) centripetal [two or more adjacent striking platforms]. The preparation of these cores is thus always centripetal. However, the removal of the major flakes can be unipolar, bipolar or centripetal. The term Levallois only refers to specimens, which clearly bear evidence of the production of a limited number of large central-positioned flakes on the core, which have been struck off from individual proximal striking platforms, and which were usually prepared several times. Levallois thus only refers to preferential or linear (recurrent or not) centripetal core reduction. Only a very small percentage of the centripetal cores and flakes will thus be classified as true Levallois products, by virtue of the presence of a single flake scar covering more than 60% of the reduction surface . Core reduction strategies are by necessity dynamic processes, since they must manage an ever-decreasing amount of raw material. Variability in centripetal core reduction strategies can be explained by dynamic adjustments made during the process of core reduction. Indeed, flintknappers always had to respond to the often-unpredictable nature of stone fracture.