Pride (In the Name of Love)

"Pride (In the Name of Love)" is a song by the Irish rock band U2. The second track on the band's 1984 album, The Unforgettable Fire, it was released as the album's lead single in September 1984. Written about Martin Luther King, Jr., the song received mixed critical reviews at the time, but it was a major commercial success for the band and has since become one of the band's most popular songs. It was named the 388th greatest song by Rolling Stone on their list of "The 500 Greatest Songs of All Time". "Pride" appeared on the compilation The Best of 1980-1990 as the opening track, and on the 2006 compilation U218 Singles.

The melody and the chords were worked up in a November 1983 War Tour sound check in Hawaii and completed in Windmill Lane Studios during The Unforgettable Fire recording sessions.[1][2] The guitar part is subtly varied through each verse, chorus, and melody, such that no riff is exactly repeated.[2]

The song had been intended to be based on Ronald Reagan's pride in America's military power, but Stephen B. Oates's book Let The Trumpet Sound: A Life of Martin Luther King, Jr. and a biography of Malcolm X caused the lyricist Bono to ponder the different sides of the civil rights campaigns, the violent and the non-violent.[1] In subsequent years, Bono has expressed his dissatisfaction with the lyrics, which he describes, along with another Unforgettable Fire song "Bad", as being "left as simple sketches". He says that he was swayed by the Edge and producers Brian Eno and Daniel Lanois, who played down the need to develop the lyrics as they thought their impressionistic nature would give added forcefulness to the song's feeling, particularly when heard by non-English speakers.[3] In U2 by U2,[4] Bono said: "I looked at how glorious that song was and thought: 'What the fuck is that all about?' It's just a load of vowel sounds ganging up on a great man. It is emotionally very articulate - if you didn't speak English."

The song contains the erroneous reference to King's shooting as "Early morning, April 4," when it actually occurred after 6 p.m. Bono acknowledges the error and in live performances he occasionally changes the lyric to "Early evening...."[3]

Chrissie Hynde of the Pretenders sang backing vocals on the recording. She was married to Jim Kerr of Simple Minds at the time and she is credited as "Christine Kerr."[2]

"Pride" is in the key of B. The song follows a chord progression of B-E–A–F♯m and the solo is B–D–E–E.

"Pride" reached #3 on the UK Singles Chart and #8 on the Dutch Singles Chart. The song was the band's first top 40 hit in the United States where it peaked at #33. It gained considerable US album-oriented rock radio airplay and its video was on heavy rotation on MTV, thus helping U2 continue its commercial breakthrough begun with the War album. It reached #1 in New Zealand, the first time a U2 single topped a country's singles chart.

Initial critical reactions to "Pride" were mixed, especially in regards to the lyrics. Robert Christgau in The Village Voice complained of "the moralism with the turn-somebody-else's-cheek glorification of Martin Luther King's martyrdom."[5] Meanwhile, Kurt Loder of Rolling Stone wrote that "'Pride' gets over only on the strength of its resounding beat and big, droning bass line, not on the nobility of its lyrics, which are unremarkable."[6]

In 2007, the Roots covered "Pride" in a medley with "Sunday Bloody Sunday" for an NAACP dinner honoring Bono. The band also mixed in some of their own "False Media" and bits of Edwin Starr's "War."[14] 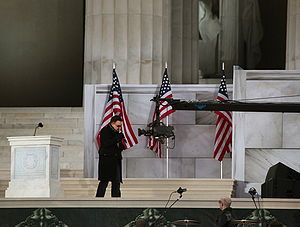 "Pride" was first played live at the fourth show of the Unforgettable Fire Tour on 2 September 1984 in the New Zealand city of Auckland.[15] The song has been played at virtually every U2 concert since the Unforgettable Fire Tour although it was played infrequently on the first and second legs of 2001's Elevation Tour and the second and third legs 2009's 360 Tour. Live performances during the 1980s and early 1990s were usually played in the key of A# while since the late 1990s the song has been played in the key of A. As of 2009, it is the band's most played song with over 770 documented performances, though "I Will Follow" has likely been performed more often.[16] Clips from Martin Luther King speeches are often shown on the various tour video screens during these performances. In 2010, in Brisbane, Australia, the final verse was changed to reflect the 30th anniversary of the assassination of John Lennon (8 December 2010).

U2 performed the song, along with "City of Blinding Lights," to upwards of 400,000 people on 18 January 2009 at the We Are One concert at the Lincoln Memorial to celebrate the upcoming inauguration of Barack Obama.[17][18] At the end of the performance Bono asked the audience to sing for King's dream, saying it was "not just an American dream; also an Irish dream, a European dream, an African dream", before referencing it to the Israeli–Palestinian conflict and saying that it was "an Israeli dream, and also a Palestinian dream."[18] The performance of "Pride" closed off with Bono quoting part of King's speech "I Have a Dream," saying "Let freedom ring! Let freedom ring! Let freedom ring! Every village, every hamlet, every state, every city. Let freedom ring!" before seguing into "City of Blinding Lights."[18] Bassist Adam Clayton later said "We were scratching our heads going, 'How does an Irish band get invited to play at the Presidential Inauguration?' Our way in was through a song like 'Pride'. It allowed Obama's people to express the connection without being too overt. It was one of those moments where you know the world is watching, but a healthy amount of anxiety gets your mojo working."[19]

Live performances of "Pride" appear on the concert films Rattle and Hum (both the album and motion picture), Zoo TV: Live from Sydney, PopMart: Live from Mexico City, U2 Go Home: Live from Slane Castle, Vertigo 2005: Live from Chicago, Live from Paris, and U2 3D.

Three music videos were made. The first was shot in August by director Donald Cammell and features opening and closing shots of the Dublin Docklands area. Two versions of this video exist; black and white and colour (sepia). The band was not satisfied with Cammell's video, and they agreed to their principal photographer, Anton Corbijn, shooting an alternative. The second video filmed in a basement near London's Heathrow Airport, it features U2 standing sternly in front of a wall under poor lighting conditions. The U2 camp was also unimpressed with this video and a third video is produced by compiling footage shot during The Unforgettable Fire recording sessions at Slane Castle. The original (black and white) Cammell video was primarily used in promotion.[20]