Prime Minister of the Netherlands

Although he is the most important political figure in the Netherlands, the Prime Minister is not as powerful as his British and German counterparts. This is mainly because, due to the Dutch system of proportional representation, it is nearly impossible for one party to get a majority of seats in the House of Representatives (lower house). Therefore, the government is always a coalition between two or more parties. Because of his limited powers, the prime minister is described as primus inter pares (first among equals).[3]

The Hague's Binnenhof. The Ministry of General Affairs is in the centre, with on the centre left a hexagonal tower, named The Torentje, which is the office of the Prime Minister

Gradually the Prime Minister became an official function of government leader, taken by the political leader of the largest party. Since 1848 the role of the first minister has become relevant. In that year the Constitution of the Netherlands was amended to make ministers responsible to parliament, rather than - as hitherto - being responsible to the King, who acted as the leader of cabinet. Until 1901 the position chair of the council of ministers officially rotated between ministers. Between 1901 and 1945 the position formally still rotated but prominent politicians were able to claim a rotation period of four years. In 1937 a separate Ministry of General Affairs was instituted which was informally linked to the Prime Minister. Barend Biesheuvel (1971-1973) was the last Prime Minister who was not the political leader of the largest party in cabinet, but actually of the third largest. In 1983 the function of Prime Minister was laid down in the constitution. 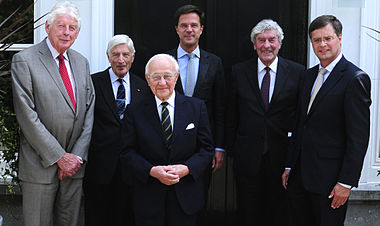 Countries of the Kingdom of the Netherlands