Prince Edward County (2011 census population 25,258) is a single-tier municipality and a census division of the Canadian province of Ontario.

Long settled by indigenous peoples, the county has significant archeological sites. These include the LeVescounte Mounds of the Point Peninsula Complex people, built about 2000 years ago.

The settlement for European-Canadians was facilitated when the county was created by Upper Canada's founding lieutenant-governor John Graves Simcoe on July 16, 1792.[2] It was named after Prince Edward Augustus, Duke of Kent (the fourth son of King George III) who was commander-in-chief of British North America.

Shortly after the American Revolution, the Crown made land grants to some of the earliest United Empire Loyalists to encourage their settlements in Ontario and provide compensation for property lost in the Thirteen Colonies. The county was originally composed of three townships named in honour of three of George III's daughters.

For many years Prince Edward County has been closely associated with the wholly mainland Hastings County. Its longtime militia unit has been The Hastings and Prince Edward Regiment (locally known as the Hasty Ps), whose most famous member was Farley Mowat. This noted nature author wrote And No Birds Sang, about his experiences with the Hasty Ps during the Second World War's Italian Campaign. 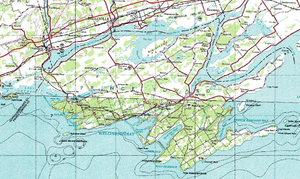 Prince Edward County is located in Southern Ontario on a large irregular headland or littoral at the eastern end of Lake Ontario, just west of the head of the St. Lawrence River. This headland (officially named Prince Edward County in 1792[3]) is surrounded on the north and east by the Bay of Quinte. As the Murray Canal now connects the bay to Lake Ontario across the only land connection, the county is technically an island.

The county's relatively mild climate due to the influence of Lake Ontario has led to the establishment of about 50 vineyards and close to 30 wineries; as a result Prince Edward County is one of Ontario's newest designated viticultural areas.[4] The lake effect from Lake Ontario results in heavier snowfall than in neighbouring counties. 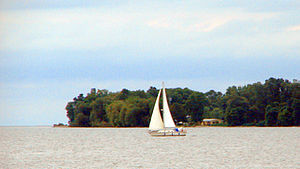 Indian Point of Cressy Point, easternmost point of Prince Edward County and entrance to the Bay of Quinte.

Despite the official name, Prince Edward is not a county by the standard Ontario definition — it is a single-tier municipal government with city status that handles all municipal services. The former county seat and current council hall is located at the Shire Hall in Picton. Officially the area is the smallest single-tier municipality in Ontario, consisting of the merged governments of the original county and the 10 former towns, villages and townships which governed the area until 1997.

Prince Edward County has become a vacation Mecca with Sandbanks Provincial Park, the world's largest freshwater dunes,[9] and Ontario's newest VQA wine Appellation[10] as the twin-centerpieces of the tourism industry. Hotels, Motels, Bed & Breakfasts are abundant and mostly occupied during the summer months. In addition, many cottages are available such as those offered at Sandbanks Beach Resort.

Beside the historic Crystal Palace is the County Youthpark. It provides a great location for people of all ages and interests to congregate, as a recent mini-documentary reveals. Whereas the region is known for a large retirement community, young blood now flocks to the County to visit the skatepark and innovative playground nestled in the corner of the Picton Fairgrounds property (which also holds the Picton Arena, the Prince Edward Curling Club & Crystal Palace). For example, the YoungLife youth event "Road Rage" had teens of all ages visiting skateboard parks across Ontario and then entering their homemade skateboarding video into a contest; Picton was one of their stops. That Transworld and Etnies representatives have visited and given very positive reviews about the Picton skatepark shows that the skatepark is recognized by the skateboarding/biking community as one of Ontario's best parks. The playground is also very creative and innovative and loved by those in the community. During the summer, a canteen is open to sell small food items. The artistic rendering of the skatepark is available at Transworld's website by clicking here. Vancouver-based Spectrum Skateparks Inc, says of the skatepark,

Prince Edward County had a big dream, & Spectrum guided them in achieving it. Inspired by the attraction / tourist-draw success of Spectrum’s other parks in the area, Parks Commissioner Barry Braun decided to plan by the creed that their local skaters ride by: “Go Big or Go Home!” A powerfully dynamic yet easy- to-ride bowl with enough lines for a lifetime is surrounded by a park-like “tech-street” pathway, converging into a central Plaza zone with still more “never been done before” elements including the spinning pac-man waiting to be explored. This park is one of Canada’s sweetest.

Prince Edward County in recent years has become a top culinary destination. With emerging artists and wineries around every corner, there is never enough time to take in all the region has to offer.

From the historic Black River Cheese Company which started operations in 1901 to the new LEED-certified, award-winning Fifth Town Artisan Cheese Factory, the ‘County’ as it is referred to, boasts of being both a tranquil and culinary destination hot spot.

The 'County' also holds the annual Great Canadian Cheese Festival.[12] This festival, held at the Picton Fairgrounds in June, boasts outstanding cheese-makers from all across Canada offering way more than 125 artisan cheeses for tasting and purchase. The festival also includes non-cheese related artisan foods such as, various breads and condiments, wine, cider and craft beer as well as many other offerings.

With an increasing number of cultural activities — in part due to the emigration of top artists and chefs to the area – like the "Taste" celebration or "Six Barrels for Six Chefs", the County has created a niche in the new Creative Economy. “It's yet another point of pride for Prince Edward County, which has become the gastronomic capital of Ontario — a fertile island bursting with vineyards, organic farms and a community of artists and chefs. Tucked into the "golden triangle" between Toronto, Montreal and Ottawa, it is the province's newest Designated Viticultural Area, which helps identify the origin of a wine and its grapes.” (Globe and Mail)

One of the few surviving art-deco movie houses in Ontario, Picton's downtown Regent Theatre, is host to a variety of plays, musicals and art movie screenings throughout the year. The professional summer theatre company, Festival Players of Prince Edward County, provide a season of theatre for adults and children in July and August. Festival Players performs at a variety of venues in The County, from artisan cheese factories to wineries to orchards and museums. A drive-in movie theatre, The Mustang, is located north-west of Picton on Route 1.

Prince Edward County is within close proximity to top educational institutions in Kingston and Belleville including, Queen’s University, the Royal Military College of Canada, St. Lawrence College and Loyalist College.

The Hastings and Prince Edward District School Board serves close to 17,000 students each day at 46 elementary and eight secondary schools. The district covers a wide geographical area of 7,221 square kilometers bordered by Maynooth to the north, Deseronto to the east, Prince Edward County to the south and Quinte West to the west.

Sonrise Christian Academy is located at 58 Johnson St. in Picton and offers K-8 education from a Biblical worldview to families in Prince Edward County.

Previously the Prince Edward County Board of Education served the county.

Driving south on Loyalist Highway 33 to the village of Wellington. Proudly displayed on billboards as you arrive in the small town of 1,700 — located 15 kilometers west of Picton in Prince Edward County — is ‘Home of the Dukes.’ Every season for the past dozen years the Wellington Dukes[14] have finished at, or near the top of the II-tier league. “Parents of hockey-playing kids all over Ontario compete to send their kids to try out for the Dukes. Players aspiring for hockey scholarships to American universities, vie to play for the Dukes...”

Picton recently won the 2011 Empire "B" Junior C Championship after beating 2nd place Amherstview Jets 4-3 in the best of 7 and 1st place and defending champions Napanee Raiders in their best of seven series 4–2. In the spring of 2013, The Pirates became just the seventh team from Eastern Ontario since the 1930s to win the Ontario Hockey Association's Schmalz Cup, emblematic of Junior C supremacy in the province. The Pirates defeated the Essex 73's five games to one to capture the OHA title.

Prince Edward County is surrounded by 800 km of shoreline offering a dozen or more sheltered harbors and many facilities that cater to boating are located throughout, including full-service marinas. The County has a rich sailing history which can be discovered at Mariners Park Museum[16] in South Marysburgh. For those interested in a broader collection of maritime material, Picton is also home to The Archives and Collections Society[17] which offers more than fifty thousand documents on the Great Lakes and the sea, maritime history and navigation.

The county is served by 1 EMS station of Hastings-Quinte EMS. Policing is provided from the Ontario Provincial Police detachment located in Picton.

The following are former municipalities:[19]