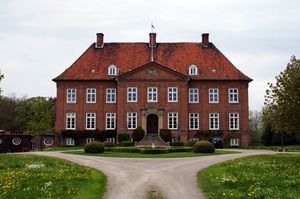 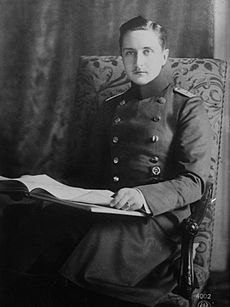 They married on 22 October 1908 at the Berliner Stadtschloss.[1][2] The marriage was arranged by the Emperor and Empress, but it was relatively happy. Alexandra was a great favorite of her mother-in-law, especially since the Empress was also her own aunt.[3] A contemporary of the court, Princess Catherine Radziwill, commented that Alexandra "had always shown herself willing to listen to her mother-in-law. She is a nice girl - fair, fat, and a perfect type of the 'Deutsche Hausfrau' dear to the souls of German novel-writers".[4] Another contemporary wrote that the marriage had been a love match, and that Alexandra was a "charmingly pretty, bright girl".[5]

The couple had planned to take up residence in Schönhausen Palace in Berlin, but changed their mind when August Wilhelm's father decided to leave his son the Villa Liegnitz in the Sanssouci Park in Potsdam. Their residence developed into a meeting place for artists and scholars.

Alexandra Victoria and August Wilhelm had one son:

During the First World War, August Wilhelm was made district administrator (Landrat) of the district of Ruppin; his office and residence was now Schloss Rheinsberg. His personal adjutant Hans Georg von Mackensen, with whom he had been close friends since his youth, played an important role in his life. These "pronounced homophilic tendencies" contributed to the failure of his marriage to Princess Alexandra Victoria. They never undertook a formal divorce due to the opposition of August Wilhelm's father, Kaiser Wilhelm II.

After World War II, Alexandra lived in a trailer near Wiesbaden, where she earned a living as a portrait and landscape painter.[6] She died on 14 April 1957 in a hotel in Lyons, France.[1][2][6]