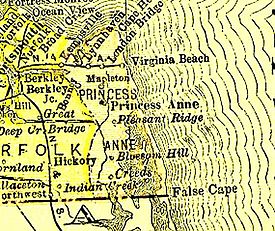 County of Princess Anne is a former county which was created in the British Colony of Virginia and the Commonwealth of Virginia in the United States in 1691. The county was merged into the city of Virginia Beach[1] on January 1, 1963.

When Admiral Christopher Newport and the colonists of the Virginia Company arrived in 1607, George Percy and his fellow Englishmen's 'first landing was at Cape Henry in what was to become Princess Anne County. They named the spot in honor of Henry Frederick, Prince of Wales, the eldest son of King James I of England. A few days later, they travelled up the James River and established Jamestown. During the early 17th century, English settlers explored and began settling the areas adjacent to Hampton Roads. By 1610, the English colonists had established a permanent settlement in the Kecoughtan area of what was to become Elizabeth Cittie (sic) in 1619. Today a part of Hampton, it is the oldest known continuously occupied English settlement in North America.

Adam Thoroughgood was an early leader in the area which became Princess Anne County, settling along the Lynnhaven River. In 1634, the King of England directed the formation of eight shires (or counties) in the colony of Virginia. One of these was Elizabeth City Shire, which included land area on both sides of Hampton Roads.

The County of Princess Anne, Virginia was governed by a Board of Supervisors. Each Supervisor represented one of six Magisterial Districts.

Beginning in the late 19th century, the small resort area of Virginia Beach along the Atlantic Ocean at the north eastern portion of the county's vast expanse of shoreline grew, particularly after 1888 with the arrival of rail service and electricity. It was incorporated as a town in 1906 and became an independent city in 1952, but remained the county seat.[citation needed]

However, in the mid 20th century, the western borders of Princess Anne County lost territory to annexation suits by Norfolk, Virginia which adjoined it after annexing all of the northern portion of Norfolk County. A merger with the tiny city of Virginia Beach became seen as a way to prevent the independent City of Norfolk from annexing more (or potentially all) of Princess Anne County.

1963: consolidation with City of Virginia Beach

Most of the area formerly in the County of Princess Anne when it was formed in 1691 is now located within the independent City of Virginia Beach. The only exceptions are some territory of the northwestern portion which became part of the City of Norfolk through annexation and a land swap agreement between the two cities in 1988.

Magisterial District of Bay Side

Magisterial District of Sea Board