On 11 March 1916 in Berlin, Marie-Auguste married Prince Joachim of Prussia, the youngest son of German Emperor Wilhelm II.[1][2] She and Joachim, who was Wilhelm's last unmarried child, had been officially engaged since 14 October of the previous year.[4] The wedding was celebrated at Bellevue Castle, and was attended by Joachim's father and mother Empress Augusta Viktoria, the Duke and Duchess of Anhalt, as well as other relatives.[4] They had a simple Lutheran ceremony.[5] 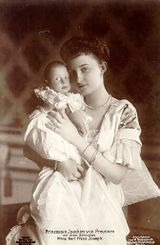 Marie-Auguste with her son.

After her father-in-law Emperor Wilhelm's abdication, her husband was unable to accept his new status as a commoner and fell into a deep depression, finally committing suicide by gunshot on 18 July 1920 in Potsdam. One source reports that he had been in financial straits and suffered from "great mental depression".[7] His own brother Prince Eitel Friedrich of Prussia commented that he suffered from "a fit of excessive dementia".[7] Before his death, the couple had recently divorced. The direct causes are not really known to the public, only that there had been no previous report of marital troubles before the divorce was announced.[8] Regardless of the reasons, this event may have also contributed to his depression.

After Joachim's suicide, Karl Franz was taken into custody by his paternal uncle Prince Eitel Friedrich.[9] As the legal head of the House of Hohenzollern, he claimed this right due to the fact that Emperor Wilhelm had issued an edict placing Hohenzollern powers in Eitel's hands.[9] This was later declared to have been illegal, and his mother was given full custody of him in 1921.[10] She was given this right despite the fact that she had previously run away from her husband and that there had been numerous servants testifying against her.[9] Eitel's defense had also stated that Marie-Auguste was not a fit person for Karl Franz's guardianship.[10] Marie-Auguste went to court however and made a plea that she was heartbroken, which may have helped win the case for her.[10]

In 1922, Marie-Auguste sued ex-Emperor Wilhelm for financial support that had been promised in her and Joachim's marriage contract.[11] Wilhelm's attorney argued that the House of Hohenzollern laws were no longer valid, and therefore there was no obligation to support her.[11]

Marie Auguste was in financial straits in the final years of her life.[12] As a result, she adopted several adults, in an exchange of money for a claim to her royal style.[12] In 1980, Princess Marie Auguste adopted Hans Robert Lichtenberg,[12] and he took the name of Frédéric Prinz von Anhalt. This has led to confusion in media reports about his being a member of a European royal family, which he is not. The family of Princess Marie Auguste has never recognized him as being part of their lineage. Females did not convey a title to their children, natural or adopted, unless allowed under a grant from the sovereign. Therefore "Prinz von Anhalt" is merely a surname as are all other titles he uses. In 1986, he married actress Zsa Zsa Gabor.