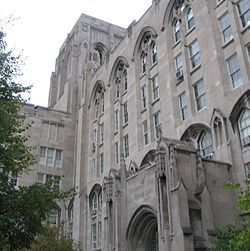 One of the many buildings that house offices of the Pritzker school. Although constructed after the main quadrangles, the Pritzker buildings adhere to Gothic architectural norms

The Pritzker School of Medicine is the M.D. granting unit of the Biological Sciences Division of the University of Chicago. It is located on the University's main campus in the historic Hyde Park neighborhood of Chicago, and matriculated its first class in 1927.

As one of the most selective medical schools in the United States, it is currently ranked 10th among research universities for medical education by the US News & World Report.[1]

Pritzker was the first medical school to hold the now international tradition of the white coat ceremony in 1989, which celebrates the students' transition and commitment to a lifelong career as a physician.[4]

The school's primary teaching hospital is the University of Chicago Medical Center. In July 2008, Pritzker entered into a teaching affiliation with NorthShore University HealthSystem.[6]

According to the April 2015 print issue of Discover magazine (volume 36, number 3), it is the home to the Sleep, Metabolism, and Health Center in the Department of Medicine, directed by Eve Van Cauter.