From Infogalactic: the planetary knowledge core
Jump to: navigation, search
For other uses, see Profession (disambiguation).

A profession is a vocation founded upon specialised educational training, the purpose of which is to supply disinterested objective counsel and service to others, for a direct and definite compensation, wholly apart from expectation of other business gain.[1] The term is a truncation of the term "liberal profession", which is, in turn, an anglicisation of the French term "profession libérale". Originally borrowed by English users in the 19th century, it has been re-borrowed by international users from the late 20th, though the (upper-middle) class overtones of the term do not seem to survive retranslation: “liberal professions” are, according to the Directive on Recognition of Professional Qualifications (2005/36/EC) “those practised on the basis of relevant professional qualifications in a personal, responsible and professionally independent capacity by those providing intellectual and conceptual services in the interest of the client and the public”. 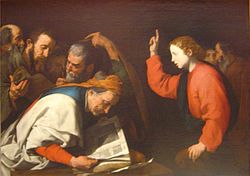 Jesus and the doctors of the Faith,
by the entourage of Giuseppe Ribera

Major milestones which may mark an occupation being identified as a profession include:[2]

With the rise of technology and occupational specialization in the 19th century, other bodies began to claim professional status: pharmacy, veterinary medicine, psychology, nursing, teaching, librarianship, optometry and social work, each of which could claim, using these milestones, to have become professions by 1900.[5]

Just as some professions rise in status and power through various stages, others may decline.[citation needed] Disciplines formalized more recently, such as architecture, now have equally long periods of study associated with them.[6]

Although professions may enjoy relatively high status and public prestige, not all professionals earn high salaries, and even within specific professions there exist significant inequalities of compensation; in law, for example, a corporate/insurance defense lawyer working on a billable-hour basis may earn several times what a prosecutor or public defender earns.

A profession arises when any trade or occupation transforms itself through "the development of formal qualifications based upon education, apprenticeship, and examinations, the emergence of regulatory bodies with powers to admit and discipline members, and some degree of monopoly rights."[7]

Originally, any regulation of the professions was self-regulation through bodies such as the College of Physicians or the Inns of Court. With the growing role of government, statutory bodies have increasingly taken on this rôle, their members being appointed either by the profession or (increasingly) by government. Proposals for the introduction or enhancement of statutory regulation may be welcomed by a profession as protecting clients and enhancing its quality and reputation, or as restricting access to the profession and hence enabling higher fees to be charged; or else may be resisted as limiting the members' freedom to innovate or to practise as in their professional judgement they consider best.

Besides regulating access to a profession, professional bodies may set examinations of competence and enforce adherence to an ethical code. There may be several such bodies for one profession in a single country, an example being the accountancy bodies of the United Kingdom (the ACCA, CAI, the CIMA, the CIPFA, the ICAEW, the ICAS), all of which have been given a Royal Charter, although their members are not necessarily considered to hold equivalent qualifications, and which operate alongside further bodies (AAPA, IFA, CPA UK). Another example of a regulatory body that governs a profession is the Hong Kong Professional Teachers Union, which governs the conduct, rights, obligations and duties of salaried teachers working in educational institutions in Hong Kong.

Typically, individuals are required by law to be qualified by a local professional body before they are permitted to practice in that profession. However, in some countries, individuals may not be required by law to be qualified by such a professional body in order to practice, as is the case for accountancy in the United Kingdom (except for auditing and insolvency work which legally require qualification by a professional body). In such cases, qualification by the professional bodies is effectively still considered a prerequisite to practice as most employers and clients stipulate that the individual hold such qualifications before hiring their services. For example, in order to become a fully qualified teaching professional in Hong Kong working in a state or government-funded school, one needs to have successfully completed a Postgraduate Diploma in Education ("PGDE") or a bachelor's degree in Education ("BEd") at an approved tertiary educational institution or university. This requirement is set out by the Educational Department Bureau of Hong Kong, which is the governmental department that governs the Hong Kong education sector.

Professions tend to be autonomous, which means they have a high degree of control of their own affairs: "professionals are autonomous insofar as they can make independent judgments about their work".[8] This usually means "the freedom to exercise their professional judgement."[9]

Professions enjoy a high social status, regard and esteem conferred upon them by society.[11][12] This high esteem arises primarily from the higher social function of their work, which is regarded as vital to society as a whole and thus of having a special and valuable nature. All professions involve technical, specialised and highly skilled work often referred to as "professional expertise."[13] Training for this work involves obtaining degrees and professional qualifications (see Licensure) without which entry to the profession is barred (occupational closure). Updating skills through continuing education is required through training.

All professions have power.[14] This power is used to control its own members, and also its area of expertise and interests. A profession tends to dominate, police and protect its area of expertise and the conduct of its members, and exercises a dominating influence over its entire field which means that professions can act monopolist,[15] rebuffing competition from ancillary trades and occupations, as well as subordinating and controlling lesser but related trades.[16] A profession is characterized by the power and high prestige it has in society as a whole. It is the power, prestige and value that society confers upon a profession that more clearly defines it. The power of professions has led to them being referred to as conspiracies against the laity. On the other hand, professionals acquire some of their power and authority in organizations from their expertise and knowledge. As such they can bend rules, reduce bureaucratic inertia and increase problem solving and adaptability.[17]

Characteristics of a profession

There is considerable agreement about defining the characteristic features of a profession. They have a "professional association, cognitive base, institutionalized training, licensing, work autonomy, colleague control... (and) code of ethics,"[18] to which Larson then also adds, "high standards of professional and intellectual excellence," (Larson, p. 221) that "professions are occupations with special power and prestige," (Larson, p.x) and that they comprise "an exclusive elite group," (Larson, p. 20) in all societies. Members of a profession have also been defined as "workers whose qualities of detachment, autonomy, and group allegiance are more extensive than those found among other groups...their attributes include a high degree of systematic knowledge; strong community orientation and loyalty; self-regulation; and a system of rewards defined and administered by the community of workers."[19]

A profession has been further defined as: "a special type of occupation...(possessing) corporate solidarity...prolonged specialized training in a body of abstract knowledge, and a collectivity or service orientation...a vocational sub-culture which comprises implicit codes of behaviour, generates an esprit de corps among members of the same profession, and ensures them certain occupational advantages...(also) bureaucratic structures and monopolistic privileges to perform certain types of work...professional literature, legislation, etc." [20] A professional should love what they do and take it seriously.