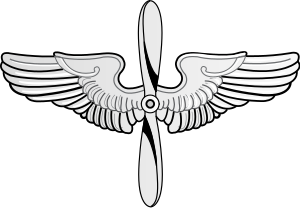 Cadets in the Air Force Reserve Officer Training Corps are awarded their Prop and Wings insignia after completing Field Training and entry into the Professional Officer Course. Officer Training School allows Basic Officer and Commissioned Officer trainees as well as National Guard Officer Candidates going through the Academy of Military Science to wear the Prop and Wings during the second half of their training.

Although the standard insignia is chrome, cadets from all commissioning sources are authorized to wear a gold Prop and Wings device if they are a direct descendant of a veteran who served in the Army Air Corps, Women Air Force Service Pilots, or were a graduate of the United States Air Force Academy.[1]