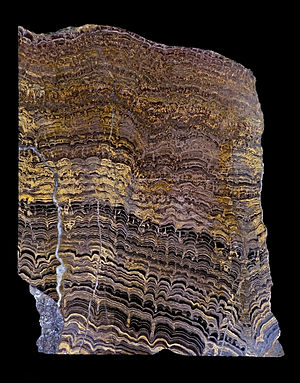 The Proterozoic /ˌproʊtəroʊˈzoʊ.ᵻk/ is a geological eon representing the time just before the proliferation of complex life on Earth. The name Proterozoic comes from Greek and means "earlier life",the Greek root protero-,means "former, earlier" and zoic-,means "animal,living being"[1]. The Proterozoic Eon extended from 7016788940000000000♠2500 Ma to 7016171042192000000♠542.0±1.0 Ma (million years ago), and is the most recent part of the Precambrian. It is subdivided into three geologic eras (from oldest to youngest): the Paleoproterozoic, Mesoproterozoic, and Neoproterozoic.

The well-identified events of this eon were the transition to an oxygenated atmosphere during the Paleoproterozoic; several glaciations, including the hypothesized Snowball Earth during the Cryogenian period in the late Neoproterozoic; and the Ediacaran Period (635 to 542 Ma) which is characterized by the evolution of abundant soft-bodied multicellular organisms.

The geologic record of the Proterozoic is much better than that for the preceding Archean. In contrast to the deep-water deposits of the Archean, the Proterozoic features many strata that were laid down in extensive shallow epicontinental seas; furthermore, many of these rocks are less metamorphosed than Archean-age ones, and plenty are unaltered.[2]:315 Study of these rocks shows that the eon continued the massive continental accretion that had begun late in the Archean, as well as featured the first definitive supercontinent cycles and wholly modern orogenic activity.[2]:315–18, 329–32

Evidence for the first known glaciations occurred during the Proterozoic; one began shortly after the beginning of the eon, while there were at least four during the Neoproterozoic, possibly climaxing with the hypothesized Snowball Earth of the Sturtian and Marinoan glaciations.[2]:320-1, 325

The accumulation of oxygen

One of the most important events of the Proterozoic was the accumulation of oxygen in the Earth's atmosphere. Though oxygen is believed to have been released by photosynthesis as far back as Archean times, it could not build up to any significant degree until chemical sinks—unoxidized sulfur and iron—had been filled; until roughly 2.3 billion years ago, oxygen was probably only 1% to 2% of its current level.[2]:323 Banded iron formations, which provide most of the world's iron ore, were also a prominent chemical sink; their accumulation ceased after 1.9 billion years ago, either due to an increase in oxygen or a more thorough mixing of the oceanic water column.[2]:324

Red beds, which are colored by hematite, indicate an increase in atmospheric oxygen after 2 billion years ago; they are not found in older rocks.[2]:324 The oxygen buildup was probably due to two factors: a filling of the chemical sinks, and an increase in carbon burial, which sequestered organic compounds that would have otherwise been oxidized by the atmosphere.[2]:325

The Proterozoic was a very tectonically active period in the Earth’s history. The late Archean to Early Proterozoic corresponds to a period of increasing crustal recycling, which may be due to subduction. Evidence for this increased subduction activity comes from the abundance of old granites originating mostly after 2.6 Ga.[3] The appearance of eclogites, which are high pressure metamorphic rocks (>1 GPa), are explained using a model incorporating subduction. The lack of Archean eclogites in today’s rock record suggests that conditions at the time did not favor the formation of high grade metamorphism and therefore did not achieve the same levels of subduction as in the Proterozoic.[4] As a result of remelting of basaltic oceanic crust due to subduction, the cores of the first continents grew large enough to withstand crustal recycling processes. The long-term tectonic stability of these cratons is the reason we find continental crust ranging up to a few billion years in age.[5] It is believed that 43% of modern continental crust formed in the Proterozoic, 39% formed in the Archean, and only 18% in the Phanerozoic.[3] Studies by Condie 2000[citation needed] and Rino et al. 2004[citation needed] suggest that crust production happened episodically. By isotopically calculating ages of Proterozoic granitoids it was determined that there were several episodes of rapid increase in continental crust production. The reason for these pulses is unknown,but they seemed to have been decreasing in magnitude after every period.[3]

Evidence of collision and rifting between continents raises questions as to what exactly the movements of the Archean cratons composing Proterozoic continents were Paleomagnetic and geochronological dating mechanisms enable the advancement in deciphering Precambrian tectonics. It is known that tectonic processes in the Proterozoic resemble greatly what we see today. This is due to closely resembling features in the rock record, such as orogenic belts or ophiolite complexes. Most geologists would conclude that the Earth was active at the time. It is also commonly accepted that in the Precambrian the Earth went through several Wilson cycles.[3] In the late Proterozoic, the dominant supercontinent was Rodinia (~1000-~750 Ma). It consisted of a series of continents all attached to a central craton called Laurentia. An example of an orogeny associated with the construction of Rodinia is the Grenville orogeny located in Eastern North America. Rodinia formed after the breakup of Columbia and prior to the assemblage of the supercontinent Gondwana (~500 Ma).[6] The defining orogenic event associated with the formation of Gondwana was the collision of Africa, South America, Antarctica and Australia forming the Pan-African orogeny.[7]

Columbia was dominant in the early-mid Proterozoic and not much is known about continental assemblages before then. There are a few plausible models that explain tectonics of the early Earth pre-Columbia, but the current most plausible theory is that prior to Columbia, there were only a few independent craton formations scattered around the Earth (not necessarily a supercontinent formation like Rodinia or Columbia).[3]

The first advanced single-celled, eukaryotes and multi-cellular life, Francevillian Group Fossils, roughly coincides with the start of the accumulation of free oxygen.[8] This may have been due to an increase in the oxidized nitrates that eukaryotes use, as opposed to cyanobacteria.[2]:325 It was also during the Proterozoic that the first symbiotic relationships between mitochondria (for nearly all eukaryotes) and chloroplasts (for plants and some protists only) and their hosts evolved.[2]:321–2

The blossoming of eukaryotes such as acritarchs did not preclude the expansion of cyanobacteria; in fact, stromatolites reached their greatest abundance and diversity during the Proterozoic, peaking roughly 1200 million years ago.[2]:321–3

Classically, the boundary between the Proterozoic and the Phanerozoic eons was set at the base of the Cambrian Period when the first fossils of animals including trilobites and archeocyathids appeared. In the second half of the 20th century, a number of fossil forms have been found in Proterozoic rocks, but the upper boundary of the Proterozoic has remained fixed at the base of the Cambrian, which is currently placed at 542 Ma.