The Public Theater is a New York City arts organization founded as The Shakespeare Workshop in 1954 by Joseph Papp, with the intention of showcasing the works of up-and-coming playwrights and performers. At Papp's death in 1991, the Public Theater was renamed the "Joseph Papp Public Theater" in his memory.[1] It is headquartered at 425 Lafayette Street in the former Astor Library in the East Village section of Lower Manhattan.

The venue opened in 1967, mounting the world-premiere production of the musical HAIR as its first show. It is led by Artistic Director Oskar Eustis and Executive Director Patrick Willingham.[2]

The Public is dedicated to embracing the complexities of contemporary society and nurturing both artists and audiences, as it continues Joseph Papp's legacy of creating a place of inclusion and a forum for ideas.[3]

In addition to five theater venues – the Shiva, the Martinson, the LuEsther Hall, the Anspacher and the Newman – the site is home to Joe's Pub, a cabaret-style setting used for new work, musical performances, spoken-word artists and soloists.

The Public also operates the Delacorte Theater in Central Park, where it presents Shakespeare in the Park, one of New York City's most beloved summer traditions. New York natives and visitors alike have been enjoying free Shakespeare in Central Park since performances began in 1954.[4] Notable productions in recent years include: The Merchant of Venice in 2010, featuring Al Pacino as Shylock; Twelfth Night in 2009, with Anne Hathaway; the 40th anniversary production of Hair in 2008; and Mother Courage And Her Children, with Meryl Streep and Kevin Kline.

In addition to each season of full-scale theatrical productions, The Public also produces a number of different series, festivals and programs each year.

In 2008, The Public presented its inaugural Public LAB series, an annual series of new plays presented in collaboration with LAByrinth Theater Company. Public LAB lets New Yorkers see more of the work they love from The Public in scaled-down productions, and allows The Public to support more artists, as well as gives audiences immediate access to new plays in development at affordable prices. With each Public LAB show, corresponding speaker series are presented as after-show talkbacks to discuss prominent themes, ideas and topics in the plays. A number of plays that have appeared in the Public LAB series have gone onto full-scale productions, including Tracey Scott Wilson’s The Good Negro, which ran at The Public in 2009, and Bloody Bloody Andrew Jackson , which had a sold-out, thrice-extended Off-Broadway run at The Public in the spring of 2010 and transferred to Broadway that fall.[5]

The Public Forum, begun in 2010, is an exciting series of lectures, debates and conversations that showcase leading voices in the arts, politics and the media. Curated by Jeremy McCarter, a senior writer at Newsweek, Public Forum events explore issues raised by plays in The Public's season, as well as the political and cultural headlines of today's world. In keeping with the best traditions of The Public, the Forum hosts a wide diversity of views and brings the theater into contact with the society around it. Notable participants in the series include Stephen Sondheim, Tony Kushner, Arianna Huffington, Alec Baldwin and Anne Hathaway.[9]

The Public hosts the annual Under the Radar Festival, directed by Mark Russell. Begun in 2004, Under The Radar spotlights international artists ranging from emerging talents to masters in the field. The festival is a wild mix of works by ensembles, solo artists, writers, and creators. The ultimate goal of UTR is to offer a crash course in theater that is exciting, independent, and experimental, created by some of the most dynamic artists working today. As of April 2011, there have been 104 productions from over 18 countries,[citation needed] including the United States, Australia, Belarus, Bolivia, Brazil, France, Ireland, Mali, Mexico, the Netherlands, Russia, and the United Kingdom. Some artists who have collaborated with UTR include SITI Company, Elevator Repair Service, Nature Theater of Oklahoma, Superamas, Abbey Theatre, Mike Daisey, Reggie Watts, Teatro De Los Andes, and many more.[10]

The Public also fosters Public Studio, a performance series dedicated to developing the works of new and emerging theater artists. Emerging playwrights get the opportunity to stage a piece somewhere between a workshop and a full production in front of an audience, as an opportunity to gage audience reaction and further develop their work. [12]

The Public also educates through its Shakespeare Spring Break, Summer ShakeUP, and A Midsummer Day’s Camp programs, all for teenagers interested in learning about and performing Shakespeare.[14]

Suzan-Lori Parks, Pulitzer Prize-winning playwright and Master Writer Chair of The Public, debuted her performance piece Watch Me Work as part of the 2011 Under The Radar Festival. As of April 2011, Parks continues to perform the piece in the main lobby of The Public Theater. A meditation on the artistic process and an actual work session, Watch Me Work features Parks working on her newest writing project in the main lobby of The Public Theater. The audience is invited to come and watch her work and/or to share the space and get some of their own writing work done. During the last fifteen minutes of the performance Parks answers questions the audience might have regarding their own work and their creative process.[15]

The most famous work to emerge from The Public, other than the original production of Hair, is the Michael Bennett musical A Chorus Line, based on the lives and careers of Broadway dancers. The show created such a stir of anticipation among the theatrical community that the entire limited run sold out long before opening night. Demand for tickets was such that the show moved uptown to Broadway's Shubert Theatre, where it remained "one singular sensation" for fifteen sold-out years. Over the years, revenue from the many worldwide productions, both professional and amateur, of the show has been a steady and main source of income for The Public.

The Public Theater has won 42 Tony Awards, 151 Obies, 41 Drama Desk Awards and four Pulitzer Prizes. Fifty-four Public Theater productions have moved to Broadway, including Sticks and Bones; That Championship Season; A Chorus Line; For Colored Girls Who Have Considered Suicide When the Rainbow Is Enuf; The Pirates of Penzance; The Tempest; Bring in 'da Noise, Bring in 'da Funk; Michael John LaChiusa's The Wild Party; The Ride Down Mt. Morgan; Topdog/Underdog; Take Me Out; Caroline, or Change; Passing Strange; the revival of HAIR; Bloody Bloody Andrew Jackson; The Merchant of Venice; "The Normal Heart", Well, Fun Home, and Hamilton. 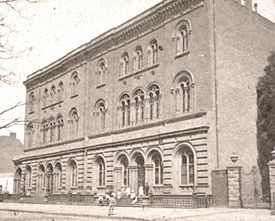 The Astor Library in the latter half of the 19th century 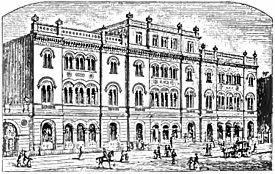 A drawing of the Library published in 1900

The Public has been housed in a landmarked Romanesque revival structure at 425 Lafayette Street since 1967, built between 1853 and 1881 as the Astor Library, which later merged with the Tilden and Lenox collections to become the New York Public Library. The library was built by William B. Astor, son of the library's founder, John Jacob Astor. A German-born architect, Alexander Saeltzer, who had been the architect of the Anshe Chesed Synagogue, [16][17] designed the building in Rundbogenstil style, then the prevailing style for public building in Germany. Astor funded two expansions of the building toward Astor Place, designed by Griffith Thomas (1856–1869) and Thomas Stent (1879–1881).[18] Both large expansions followed Saeltzer's original design so seamlessly that an observer cannot detect that the edifice was built in three stages.

In 1920, the Hebrew Immigrant Aid Society purchased the building. By 1965 it was in disuse and faced demolition. The Public Theater, then the New York Shakespeare Festival, persuaded the city to purchase it for use as a theater. It was converted for theater use by Giorgio Cavaglieri between 1967 and 1976.[18][19]

The building is a New York City Landmark, designated in 1965.[20] It was one of the first buildings to be recognized as such by the newly formed Landmarks Preservation Commission of New York City, thanks to Joseph Papp’s perseverance.[21]

In 2009, The Public began its “Going Public” campaign to raise funds for a major renovation of the historic building.[22][23] Groundbreaking for the $35 million renovation occurred on March 9, 2010, with notables such as Liev Schreiber and Philip Seymour Hoffman in attendance.[24] Plans include a renovation of Joe’s Pub; the Pub went on a three-month hiatus during the summer of 2011 to allow for construction.[25] The building re-opened on October 4, 2012 after a renovation designed by Ennead Architects costing $40 million.[26] 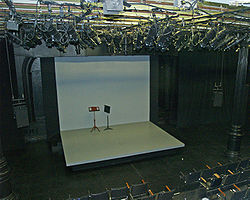 The set of Mom, How Did You Meet the Beatles? in the Shiva Theater