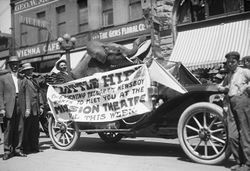 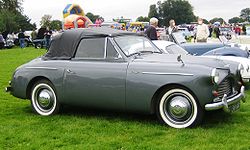 Austin A40 Sports, circa 1951. To promote the A40 Sports, Leonard Lord, Chairman of Austin, bet Alan Hess of the company's publicity department that he could not drive round the world in 30 days in the car. In 1951, an A40 Sports driven by Hess[1] achieved the round-the-world feat in 21 days rather than the planned 30 (with assistance of a KLM cargo plane) — though the stunt had no eventual impact on sales.[2] 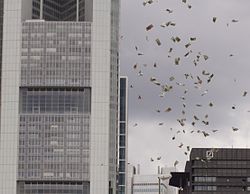 A publicity stunt is a planned event designed to attract the public's attention to the event's organizers or their cause. Publicity stunts can be professionally organized, or set up by amateurs.[4] Such events are frequently utilized by advertisers, celebrities, athletes, and politicians.

Organizations sometimes seek publicity by staging newsworthy events that attract media coverage. They can be in the form of groundbreakings, world record attempts, dedications, press conferences or organized protests. By staging and managing the event, the organization attempts to gain some control over what is reported in the media. Successful publicity stunts have news value, offer photo, video and sound bite opportunities, and are arranged primarily for media coverage.[5]

It is sometimes hard for organizations to design successful publicity stunts that highlight the message instead of burying it. For example, it makes sense for a pizza company to bake the world's largest pizza but it would not make sense for the YMCA to sponsor that same event. The importance of publicity stunts is generating news interest and awareness for the concept, product or service being marketed.[6]