The flag adopted in 1931 and used by the Provisional Government of Free India during the subsequent years of Second World War.

The Purna Swaraj declaration, or Declaration of the Independence of India, was promulgated by the Indian National Congress on 26 January 1930, resolving the Congress and Indian nationalists to fight for Purna Swaraj, or complete self-rule independent of the British Empire (literally in Sanskrit, purna, "complete," swa, "self," raj, "rule," thus "complete self-rule").

The flag of India had been hoisted by Congress President Jawaharlal Nehru on 31 December 1929, in Lahore, modern-day Pakistan. The Congress asked the people of India to observe 26 January as Independence Day. The flag of India was hoisted publicly across India by Congress volunteers, nationalists and the public.

Before 1930, few Indian political parties had openly embraced the goal of political independence from the United Kingdom. The All India Home Rule League had been advocating Home Rule for India: dominion status within the British Empire, as granted to Australia, Canada, the Irish Free State, Newfoundland, New Zealand, and South Africa. The All India Muslim League favoured dominion status as well, and opposed calls for outright Indian independence. The Indian Liberal Party, by far the most pro-British party, explicitly opposed India's independence and even dominion status if it weakened India's links with the British Empire. The Indian National Congress, the largest Indian political party of the time, was at the head of the national debate. Congress leader and famous poet Hasrat Mohani was the first activist to demand complete independence (Poorna Swaraj) from the British in 1921 from an All-India Congress Forum. Veteran Congress leaders such as Bal Gangadhar Tilak, Aurobindo and Bipin Chandra Pal had also advocated explicit Indian independence from the Empire.

Following the 1919 Amritsar Massacre, there was considerable public outrage against British rule. Europeans, (civilians and officials) were targets and victims of violence across India. In 1920, Gandhi and the Congress committed themselves to Swaraj, described as political and spiritual independence. At the time, Gandhi described this as the basic demand of all Indians; he specifically said that the question of whether India would remain within the Empire or leave it completely would be answered by the behaviour and response of the British. Between 1920 and 1922, Mahatma Gandhi led the Non-Cooperation movement: nationwide civil disobedience to oppose the Rowlatt Acts and the exclusion of Indians from the government, and the denial of political and civil freedoms.

Simon commission and the Nehru report

In 1928, the British government further outraged people across India by appointing an all-European Simon Commission to deliberate on constitutional and political reforms for India. No Indians were included in the commission, nor were any Indian political parties consulted or asked to involve themselves in the process. Upon arrival in India, Chairman Sir John Simon and other commission members were met with angry public demonstrations, which followed them everywhere. The death of a prominent Indian leader, Lala Lajpat Rai, from severe beatings by British police officials further outraged the Indian public.

The Congress appointed an all-Indian commission to propose constitutional reforms for India. Members of other Indian political parties joined the commission led by Congress President Motilal Nehru. The Nehru Report demanded that India be granted self-government under the dominion status within the Empire. While most other Indian political parties supported the Nehru commission's work, it was opposed by the Indian Liberal Party and the All India Muslim League. The British ignored the commission, its report and refused to introduce political reform.

But the Nehru Report was also controversial within the Congress. Younger nationalist leaders like Subhas Chandra Bose and Jawaharlal Nehru (Motilal Nehru's son) demanded that the Congress resolve to make a complete and explicit break from all ties with the British. Jawaharlal Nehru had been influenced by the idea of Bhagat Singh ("total independence"), which Singh had introduced a resolution demanding in 1927, which was rejected because of Gandhi's opposition.[1] Now Bose and Nehru opposed dominion status, which would retain the Monarch of the United Kingdom as the constitutional head of state of India (although in the separate capacity as King of India), and preserve political powers for the British Parliament in Indian constitutional affairs. They were supported in their stand by a large number of rank-and-file Congressmen.

In December 1928, Congress was held in Calcutta and Mohandas Gandhi proposed a resolution that called for the British to grant dominion status to India within two years. If the British failed to meet the deadline, the Congress would call upon all Indians to fight for complete independence. Bose and Nehru objected to the time given to the British – they pressed Gandhi to demand immediate actions from the British. Gandhi brokered a further compromise by reducing the time given from two years to one. Jawaharlal Nehru voted for the new resolution, while Subhash Bose told his supporters that he would not oppose the resolution, and abstained from voting himself. The All India Congress Committee voted 118 to 45 in its favour (the 45 votes came from supporters of a complete break from the British). However, when Bose introduced an amendment during the open session of Congress that sought a complete break with the British, Gandhi admonished the move:

You may take the name of independence on your lips but all your muttering will be an empty formula if there is no honour behind it. If you are not prepared to stand by your words, where will independence be?[2]

The amendment was rejected, by 1350 to 973, and the resolution was fully adopted.

On 31 October 1929, the Viceroy of India, Lord Irwin announced that the government would meet with Indian representatives in London for a Round Table Conference. To facilitate Indian participation, Irwin met with Mohandas Gandhi, Muhammad Ali Jinnah and out-going Congress President Motilal Nehru to discuss the meeting. Gandhi asked Irwin if the conference would proceed on the basis of dominion status and Irwin said he could not assure that, resulting in the end of the meeting.[3] 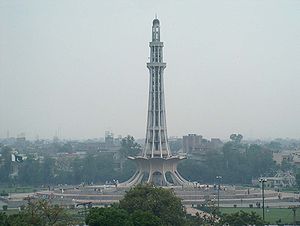 Minar-e-Pakistan in Lahore, where the Declaration of the Independence of India and Pakistan Resolution were passed

As a result of the denial of reforms and political rights, and the persistent ignorance of Indian political parties, the Indian National Congress grew increasingly cohesive – unified in the desire to oust the British from India completely.[3] A very large number of Congress volunteers and delegates, members of other political parties and an especially large public gathering attended the session convened in Lahore. Despite the bitterly cold weather, Pattabhi Sitaramayya records that:

The heat of passion and excitement, the resentment at the failure of negotiation, the flushing of faces on hearing the war drums – oh, it was all in marked contrast to the weather.[4]

Jawaharlal Nehru was elected President and veteran leaders like Chakravarthi Rajagopalachari and Sardar Vallabhbhai Patel returned to the Congress Working Committee. They approved a declaration of independence, which stated:

The British government in India has not only deprived the Indian people of their freedom but has based itself on the exploitation of the masses, and has ruined India economically, politically, culturally and spiritually.... Therefore...India must sever the British connection and attain Purna Swaraj or complete independence.[5]

At midnight on New Year's Eve, President Jawaharlal Nehru hoisted the tricolour flag of India upon the banks of the Ravi in Lahore, which later became part of Pakistan. A pledge of independence was read out, which included a readiness to withhold taxes. The massive gathering of public attending the ceremony were asked if they agreed with it, and the vast majority of people were witnessed to raise their hands in approval. One hundred seventy two Indian members of central and provincial legislatures resigned in support of the resolution and in accordance with Indian public sentiment.

The Declaration of Independence was officially promulgated on 26 January 1930. Gandhi and other Indian leaders would immediately begin the planning of a massive national revolt that would encourage the common people to participate and also help involve revolutionaries into a struggle committed to non-violence.[3] The Salt Satyagraha was initiated by Mohandas Gandhi and the Congress as the first struggle for complete independence.

There is some dispute as to who drafted the text of the declaration. Gandhi directly claimed authorship in 1940,[6] while other sources either cite Nehru as a major editor[7] or attribute it to Nehru outright.[8]

The Congress regularly observed 26 January as the Independence Day of India – commemorating those who campaigned for Indian independence. In 1947, the British agreed to transfer power and political independence to India, and 15 August became the official Independence Day. However, the new Constitution of India, as drafted and approved by the Constituent Assembly of India, was mandated to take effect on 26 January 1950, to commemorate the 1930 declaration. On that day in 1950, India became a republic.