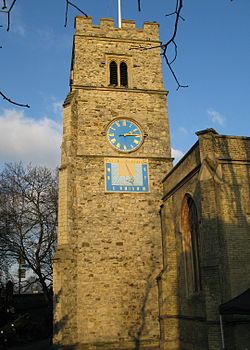 Church of St. Mary the Virgin, Putney, where the Putney Debates were held

The Putney Debates were a series of discussions between members of the New Model Army – a number of the participants being Levellers – concerning the makeup of a new constitution for Britain.

After seizing the City of London from Presbyterian opponents in August 1647, the New Model Army had set up its headquarters at Putney, in the county of Surrey (now in South West London). The debates began on 28 October 1647 at the Church of St. Mary the Virgin, but moved to the nearby lodgings of Thomas Grosvenor, Quartermaster General of Foot, the following day. The debates lasted until 11 November.

Earlier that summer Oliver Cromwell (then Member of Parliament for Cambridge), Henry Ireton (Cromwell's son-in-law) and other officers, known as the Grandees, attempted to negotiate a settlement with Charles I of England in the aftermath of the First Civil War. Their proposals, termed the Heads of Proposals, included provisions for social justice, but the monarchy and House of Lords would have retained a power of veto over the House of Commons. A further feature of the Heads of Proposals was that the king would be restored before the issues of the soldiers' indemnity and arrears were entrenched in law. This was contrary to the New Model Army's Declaration of 14 June 1647 and consequently the Heads of Proposals lost the support of the more radical elements among the military and civilian populations.

The New Model Army was the first army in history to have some kind of democratic debate in its ranks.[1][unreliable source?] Sometime before October 1647, five of the most radical cavalry regiments elected new Agitators – known as the New Agents – to represent their views. The New Agents issued a political manifesto: The Case of the Armie Truly Stated.[2] The fundamental ideas of the Case of the Armie would later be reflected in the constitutional proposals drafted in the Agreement of the People.[3]

The radicals wanted a constitution based upon manhood suffrage ("one man, one vote"), biennial Parliaments and a reorganisation of parliamentary constituencies. Authority was to be vested in the House of Commons rather than the King and Lords. Certain "native rights" were declared sacrosanct for all Englishmen: freedom of conscience, freedom from impressment into the armed forces and equality before the law.

Commander-in-chief Fairfax was unwell and could not be present, so Cromwell sat in the chair. Cromwell flatly refused to accept any compromise in which the King was overthrown, while Henry Ireton pressed the case that his own The Heads of the Proposals[4] covered all of the concerns raised by the New Agents in The Case of the Armie. The New Agents accepted the meeting, sending Robert Everard (identified on the first day of the Putney Debates as 'Buff Coat') and another New Agent from Col. Whalley's Regiment only identified as 'Bedfordshire Man' (this was possibly Trooper Matthew Weale, a signatory of the Case of the Armie and the Agreement of the People). Other members of the Army present were Colonel Thomas Rainsborough (MP for Droitwich), his brother Major William Rainsborough, and the Agitators Edward Sexby and William Allen. The New Agents also brought John Wildman and Maximillian Petty, two civilian advisors who had been involved with Army affairs since at least July 1647.

The debates opened on 28 October and were transcribed by secretary William Clarke and a team of stenographers. From 2 November however, all recording ceased. The debates were not reported and Clarke's minutes were not published at the time. They were lost until 1890 when they were rediscovered at the library of Worcester College, Oxford, and subsequently published as part of the Clarke Papers.

Cromwell and Ireton's main complaint about the Agreement was that it included terms for near universal male suffrage, which Ireton considered to be anarchy. Instead they suggested suffrage should be limited only to landholders. The Agitators, on the other hand, felt they deserved the rights in payment for their service during the war. Thus Thomas Rainsborough argued:

And Ireton, for the Grandees:

The debates concluded with the understanding that a modified version of the Agreement,[citation needed] approved by a committee chosen mainly from the ranks of the Army's officers would be the basis of any future constitutional settlement, and that it would be presented to the Army itself at a mass meeting.[6] However, the Agitators wanted to discuss the future of the king and the Grandees, fearing a complete breakdown of discipline in the Army, proposed on 8 November that the Agitators and New Agents return at once to their regiments to restore order, thereby suspending the meetings.[7] This was reinforced on 11 November when King Charles escaped from Hampton Court Palace, apparently fearing (possibly on the advice of Oliver Cromwell), that the Grandees could easily lose control of the more radical elements in the Army.[8][9] Charles I's flight brought all debate to an end as the New Model Army were faced with a more immediate threat. On the same day the General Council drafted a new manifesto to be presented at the mass meeting which among other provisions contained a clause in which the members of the army would sign a declaration of loyalty, to Fairfax the commander-in-chief and the General Council, (and hence making further agitation when ordered to desist a mutinous offence).[10]

The presentation itself was split from one mass meeting to three smaller ones. Those regiments invited to the first meeting on 15 November agreed with the manifesto, but two regiments arrived uninvited and objected, sparking the Corkbush Field mutiny. Cromwell suppressed the mutiny and at the other two meetings the other regiments agreed to the terms in the manifesto.[11]