From Infogalactic: the planetary knowledge core
Jump to: navigation, search
Not to be confused with Petrifaction.

In thermodynamic terms, all organic tissue is a store of chemical energy, which, when not maintained by the constant biochemical maintenance of the living organism, begins to hydrolyse into amino acids, chemically simpler organic components. The breakdown of the proteins of a decomposing body is a spontaneous process, protein hydrolysis, which is accelerated as the anaerobic bacteria of the digestive tract consume, digest, and excrete the cellular proteins of the body. 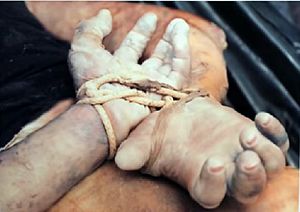 The bacterial digestion of the cell proteins weakens the tissues of the body. As the proteins are continuously broken down to smaller components, the bacteria excrete gases and organic compounds, such as the functional-group amines putrescine and cadaverine, which carry the noxious odor of rotten flesh. Initially, the gases of putrefaction are constrained within the body cavities, but eventually diffuse through the adjacent tissues, and then into the circulatory system. Once in the blood vessels, the putrid gases infiltrate and diffuse to other parts of the body and the limbs.

The visual result of gaseous tissue-infiltration is notable bloating of the torso and limbs. The increased, internal pressure of the continually rising volume of gas further stresses, weakens, and separates the tissues constraining the gas. In the course of putrefaction, the skin tissues of the body rupture and release the bacterial gas. As the anaerobic bacteria continue consuming, digesting, and excreting the tissue proteins, the body's decomposition progresses to the stage of skeletonisation. This continued consumption also results in the production of ethanol by the bacteria, which can make it difficult to determine the BAC in autopsies, particularly in bodies recovered from water.[2]

Generally, the term decomposition encompasses the biochemical processes that occur from the physical death of the person (or animal) until the skeletonisation of the body. Putrefaction is one of seven stages of decomposition; as such, the term putrescible identifies all organic matter (animal and human) that is biochemically subject to putrefaction. In the matter of death by poisoning, the putrefaction of the body is chemically delayed by poisons such as antimony, arsenic, carbolic acid (phenol), nux vomica (plant), strychnine (pesticide), and zinc chloride.

Rate of putrefaction is maximum in air, water, soil, and earth. First external sign of putrefaction in a body lying in air is usually greenish discoloration of the skin over the region of caecum which appears in 12-24 hours. And the first internal sign is usually a greenish discoloration on undersurface of liver. The exact rate of putrefaction is dependent upon many factors such as weather, exposure and location. Thus, refrigeration at a morgue or funeral home can retard the process, allowing for burial in three days or so following death without embalming. The rate increases dramatically in tropical climates.

Environmental Temperature: Decomposition is sped by high atmospheric or environmental temperature, with putrefaction speed optimized between 21 and 38°C, further sped along by high levels of humidity. This optimal temperature assists in the chemical breakdown of the tissue and promoting microorganism growth. Decomposition nearly stops below 0°C or above 48°C.

Moisture and Air Exposure: Putrefaction is ordinarily slowed by the body being submerged in water, due to diminished exposure to air. Air exposure and moisture both can contribute to the introduction and growth of microorganisms, speeding degradation.

Manner of Burial: Speedy burial can slow putrefaction. Bodies within deep graves tend to decompose more slowly due to the diminished influences of changes in temperature. The composition of graves can also be a significant contributing factor, with dense, clay-like soil tending to speed putrefaction while dry and sandy soil slows it.

Light Exposure: Light can also contribute indirectly, as flies and insects prefer to lay eggs in areas of the body not exposed to light, such as the crevices formed by the eyelids and nostrils.[3]

Condition of the Body: Emaciation slows putrefaction due to diminished moisture and fat contents within the body.

Cause of Death: The cause of death has a direct relationship to putrefaction speed, with bodies that died from acute violence or accident generally putrefying slower than those that died from infectious diseases. Certain poisons, such as potassium cyanide or strychnine may also delay putrefaction, while chronic alcoholism will speed it.

External Injuries: Antemortem or postmortem injuries can speed putrefaction as injured areas can be invaded by bacteria.

Certain substances delay putrefaction. Some of them are:

The University of Tennessee's Forensic Anthropology Facility is a body farm established in 1981 to study human putrefaction. Several others have been built in other locations since that time. 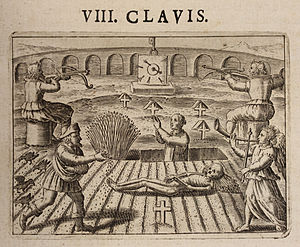 In alchemy, putrefaction is the same as fermentation, whereby a substance is allowed to rot or decompose undisturbed. In some cases, the commencement of the process is facilitated with a small sample of the desired material to act as a "seed".[citation needed]