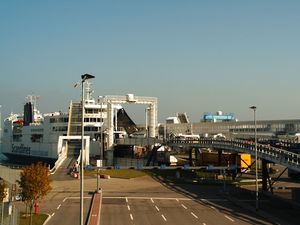 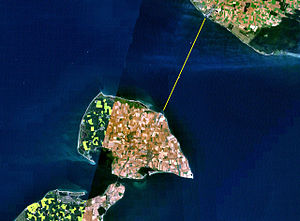 Satellite image of the Vogelfluglinie

Puttgarden is a ferry harbour and a village on the German island of Fehmarn. It lies on an important route between Germany and Denmark known as the Vogelfluglinie which crosses the 18 km strait, the Fehmarnbelt, to Rødby on the island of Lolland.

A train ferry terminal was built in Puttgarden in 1961-63 and at the same time Fehmarn was connected to the mainland by bridge. From 1945 to 1963, the ferry route from West Germany to Denmark had run between Großenbrode and Gedser. Since the completion of the Great Belt Fixed Link in Denmark, the route via Puttgarden has become less used by trains, but the harbour is still used by Scandlines ferries. The service is frequent, with four ferries giving one connection every 30 minutes, 24 hours a day.

A fixed link — a bridge or a tunnel — is planned across the Fehmarn Belt. Originally planned as a bridge, the current plan is for a tunnel, comprising both a road and a rail link. The Danish government will finance construction. The fixed link will have road fees comparable to the ferry fees. It is planned to be completed in 2021.