PyQt is a Python binding of the cross-platform GUI toolkit Qt. It is one of Python's options for GUI programming. Popular alternatives are PySide (the Qt binding with official support and a more liberal licence), PyGTK, wxPython, and Tkinter (which is bundled with Python). Like Qt, PyQt is free software. PyQt is implemented as a Python plug-in.

PyQt is developed by the British firm Riverbank Computing. It is available under similar terms to Qt versions older than 4.5; this means a variety of licenses including GNU General Public License (GPL) and commercial license, but not the GNU Lesser General Public License (LGPL).[3] PyQt supports Microsoft Windows as well as various flavours of Unix, including Linux and OS X.[4]

PyQt implements around 440 classes and over 6,000 functions and methods[5] including:

To automatically generate these bindings, Phil Thompson developed the tool SIP, which is also used in other projects.

In August 2009, Nokia, the then owners of the Qt toolkit, released PySide, providing similar functionality, but under the LGPL,[8] after failing to reach an agreement with Riverbank Computing[9] to change its licensing terms to include LGPL as an alternative license. 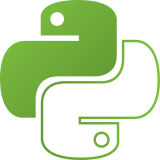 PyQt version 4 works with both Qt 4 and Qt 5. PyQt version 5 only supports Qt version 5,[4] and drops support for features that are deprecated in Qt 5.[11]

The below code shows a small window on the screen. 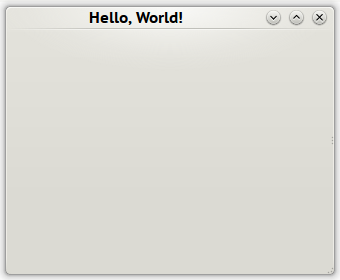 The result in KDE

Notable applications that use PyQt