From Infogalactic: the planetary knowledge core
(Redirected from Pyruvate)
Jump to: navigation, search

Pyruvic acid (CH3COCOOH) is the simplest of the alpha-keto acids, with a carboxylic acid and a ketone functional group. Pyruvate, the conjugate base, CH3COCOO−, is a key intermediate in several metabolic pathways.

Pyruvic acid can be made from glucose through glycolysis, converted back to carbohydrates (such as glucose) via gluconeogenesis, or to fatty acids through acetyl-CoA. It can also be used to construct the amino acid alanine, and be converted into ethanol or lactic acid via fermentation.

Pyruvic acid supplies energy to living cells through the citric acid cycle (also known as the Krebs cycle) when oxygen is present (aerobic respiration), and alternatively ferments to produce lactate when oxygen is lacking (fermentation).

In 1834, Théophile-Jules Pelouze distilled both tartaric acid (L-tartaric acid) and racemic acid (a mix of D- and L-tartaric acid) and isolated pyrotartaric acid (methyl succinic acid[2]) and another acid that Jöns Jacob Berzelius characterized the following year and named pyruvic acid.[3] Pyruvic acid is a colorless liquid with a smell similar to that of acetic acid and is miscible with water. In the laboratory, pyruvic acid may be prepared by heating a mixture of tartaric acid and potassium hydrogen sulfate,[4] by the oxidation of propylene glycol by a strong oxidizer (e.g., potassium permanganate or bleach), or by the hydrolysis of acetyl cyanide, formed by reaction of acetyl chloride with potassium cyanide:

Pyruvate is an important chemical compound in biochemistry. It is the output of the metabolism of glucose known as glycolysis.[5] One molecule of glucose breaks down into two molecules of pyruvate,[5] which are then used to provide further energy, in one of two ways. Pyruvate is converted into acetyl-coenzyme A, which is the main input for a series of reactions known as the Krebs cycle (also known as the Citric Acid Cycle or Tricarboxylic Acid Cycle). Pyruvate is also converted to oxaloacetate by an anaplerotic reaction, which replenishes Krebs cycle intermediates; also, the oxaloacetate is used for gluconeogenesis. These reactions are named after Hans Adolf Krebs, the biochemist awarded the 1953 Nobel Prize for physiology, jointly with Fritz Lipmann, for research into metabolic processes. The cycle is also known as the citric acid cycle or tri-carboxylic acid cycle, because citric acid is one of the intermediate compounds formed during the reactions.

If insufficient oxygen is available, the acid is broken down anaerobically, creating lactate in animals and ethanol in plants and microorganisms. Pyruvate from glycolysis is converted by fermentation to lactate using the enzyme lactate dehydrogenase and the coenzyme NADH in lactate fermentation, or to acetaldehyde and then to ethanol in alcoholic fermentation.

Pyruvate is a key intersection in the network of metabolic pathways. Pyruvate can be converted into carbohydrates via gluconeogenesis, to fatty acids or energy through acetyl-CoA, to the amino acid alanine, and to ethanol. Therefore, it unites several key metabolic processes.

Reference ranges for blood tests, comparing blood content of pyruvate (shown in violet near middle) with other constituents.

In glycolysis, phosphoenolpyruvate (PEP) is converted to pyruvate by pyruvate kinase. This reaction is strongly exergonic and irreversible; in gluconeogenesis, it takes two enzymes, pyruvate carboxylase and PEP carboxykinase, to catalyze the reverse transformation of pyruvate to PEP.

Click on genes, proteins and metabolites below to link to respective articles. [§ 1] 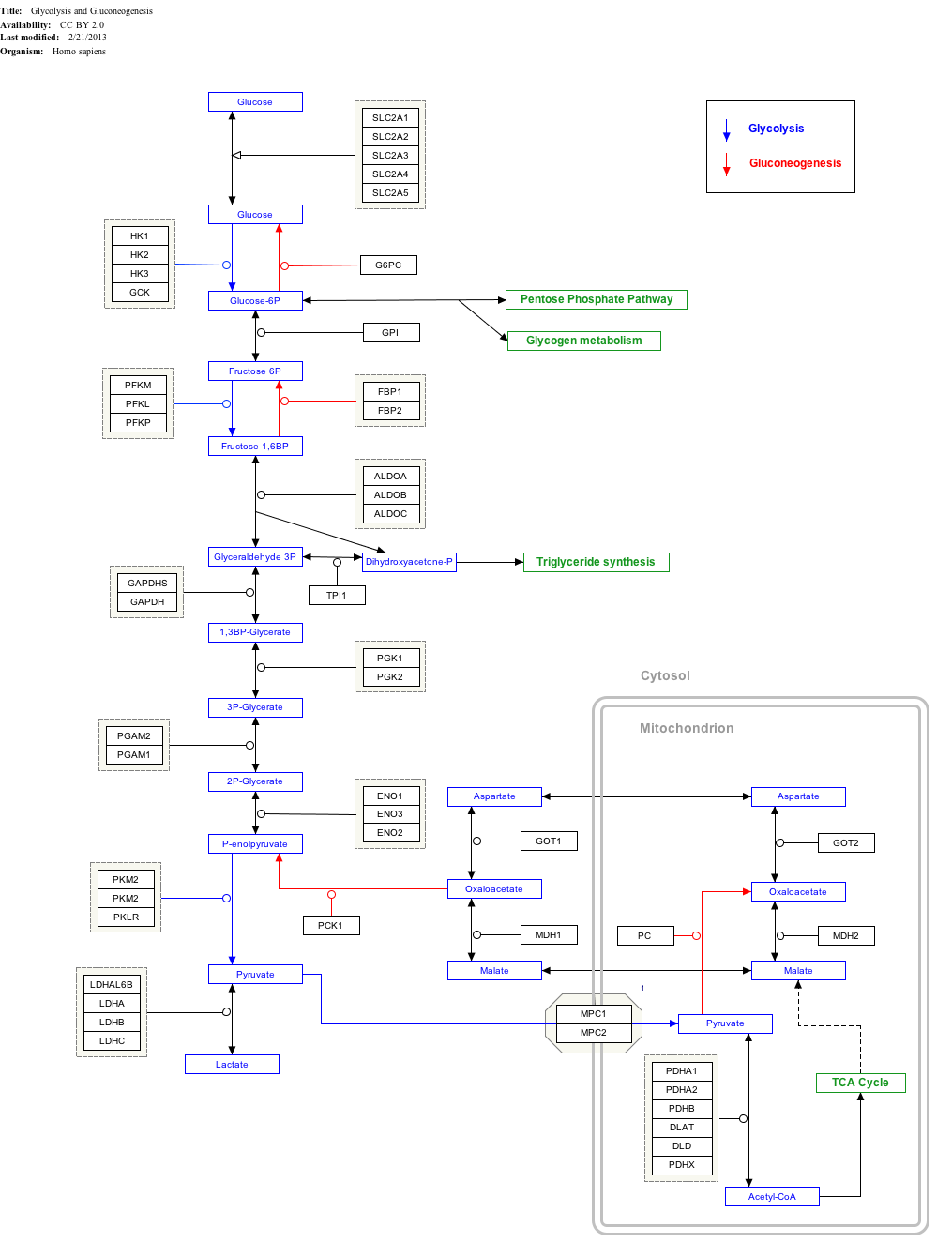 The pyruvic acid derivative bromopyruvic acid is being studied for potential cancer treatment applications by researchers at Johns Hopkins University in ways that would support the Warburg hypothesis on the cause(s) of cancer.[citation needed]

Pyruvate is sold as a weight-loss supplement, though evidence supporting this use is lacking. A systematic review of six trials found a statistically significant difference in body weight with pyruvate compared to placebo. However, all of the trials had methodological weaknesses and the magnitude of the effect was small. The review also identified adverse events associated with pyruvate such as diarrhea, bloating, gas, and increase in low-density lipoprotein (LDL) cholesterol. The authors concluded that there was insufficient evidence to support the use of pyruvate for weight loss.[6]

There is also in vitro evidence in hearts that pyruvate improves metabolism by NADH production stimulation and increases cardiac function.[7]