Qesem Cave is a Lower Paleolithic archeological site 12 km east of Tel Aviv in Israel. Early humans were occupying the site by 382,000 until c. 200,000 years ago.

The cave attracted considerable attention in December 2010 when reports suggested Israeli and Spanish archaeologists had found the earliest evidence yet of modern humans. Science bloggers pointed out that the media coverage had inaccurately reflected the scientific report.[1] Science blogger Carl Zimmer wrote: "Nowhere in this conclusion do the authors say that these teeth belong to Homo sapiens. Nowhere do they say they have just doubled the age of our species. Nowhere do they say that our species evolved in the Near East, not in Africa."[2]

Selective large-game hunting was regularly done followed by butchery of desired carcass parts for transport back to a residence for food sharing and cooking. 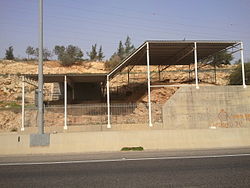 The cave exists in Turonian limestone in the western mountain ridge of Israel between the Samaria Hills and the Israeli coastal plain.[3][4] It is 90m above sea level.

Deposits at the site are 7.5 m (25 ft) deep, and are divided into two layers: the upper is about 4.5 m (15 ft) thick, and the lower 3 m (10 ft). The upper forms a step on the lower one. The deposits contain stone tools and animal remains from the Acheulo-Yabrudian complex. This a period that follows after the Acheulian but before the Mousterian. No traces of Mousterian occupation have been found.[3][4]

The cave was found in October 2000 when road construction destroyed its ceiling. This led to two rescue excavations in 2001. At present the site is protected, covered and fenced and subject to on-going excavations.[5]

Qesem Cave stone tools are made of ﬂint. They are mainly blades end scrapers, burins, and naturally backed knives. There are also flakes and hammerstones. Some of the horizons contain many blades and related blade-tools but they are absent in others. However thick side-scrapers are found throughout them. Acheulian type hand-axes are found at the top and at the bottom of the archeological sequence. All stages of stone tool manufacture have been found. Many of the cores have sufficient of the surface cortex to allow reconstruction of the original stone’s shape.[4]

Using the concentration of cosmic ray created 10Be it has been argued that the flint used at Qesem Cave was surface-collected or only dug from shallow quarries. This is in contrast to flint of the same period from Tabun Cave nearby that originated two or more metres below the surface, probably after being mined.[6]

The Qesem Cave contains one of the earliest examples of regular use of fire in the Lower Pleistocene. Large quantities of burnt bone, defined by a combination of microscopic and macroscopic criteria, and moderately heated soil lumps suggest butchering and prey-defleshing occurred near fireplaces.

A 300,000-year-old hearth was unearthed in a central part of the cave. Layers of ash was discovered in the pit, and burnt animal bones and flint tools used for carving meat were found near the hearth, suggesting it was used repeatedly and was a focal point for the people living there.[8]

Bones from 4,740 prey animals have been identified. These are mostly large mammals such as fallow deer (73–76% of identified specimens), aurochs, horse, wild pig, wild goat, roe deer, wild ass[disambiguation needed] and red deer. Tortoise and a rare rhinoceros remains have also been found but no gazelle bones.[9]

These animal bones show marks of butchery, marrow extraction and burning from fire. Analysis of the orientation and anatomical placements of the cut marks suggest meat and connective tissue were cut off in a planned manner from the bone.[9]

Deer remains are limited to limb bones and head parts without remains of vertebrae, ribs, pelvis, or feet suggesting that butchery was selective in regard to the body parts that had been carried to the cave following initial butchery of the animal carcasses elsewhere.[9]

Moreover the presence of fetal bones and the absence of deer antlers implies that much of the hunting took place in late winter through early summer. At that time the need for additional fat in the diet would have made those animals particularly important prey. The excavators described this as “prime-age-focused harvesting, a uniquely human predator–prey relationship”.[9]

The rich Acheulo-Yabrudian deposits at Qesem Cave offer a rare opportunity to study human adaptation and evolution in the Pleistocene. Because the dates indicate that human activity occurred mostly before 382 kyr, and because the site is located within the ‘out-of-Africa’ corridor, the information obtained by a study of Qesem Cave is likely to contribute substantially to our understanding of the origins and dispersal of modern humans.
Ran Barkai Co-Director of Excavation and colleagues of the Qesem Cave Project in Nature[3]

These hominins hunted cooperatively, and consumption of the highest quality parts of large prey was delayed until the food could be moved to the cave and processed with the aid of blade cutting tools and ﬁre. Delayed consumption of high-quality body parts implies that the meat was shared with other members of the group. ... Although not the earliest record of fire as technology in the Levant, Qesem Cave preserves contextual information about cooking and marrow extraction during the late Lower Paleolithic.
Mary Stiner and colleagues of the Qesem Cave Project in Proceedings of the National Academy of Sciences[9]