From Infogalactic: the planetary knowledge core
Jump to: navigation, search
For the style in other countries, see Queen Anne style architecture. 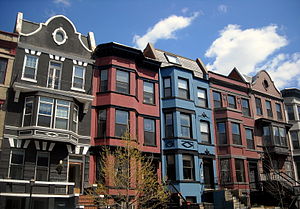 Queen Anne Style buildings in America came into vogue in the 1880s, replacing the French-derived Second Empire as the "style of the moment." The popularity of high Queen Anne Style waned in the early 1900s, but some elements, such as the wraparound front porch, continued to be found on buildings into the 1920s.

The "Queen Anne" style that had been formulated in Britain by Norman Shaw and other architects arrived in New York with the new housing for the New York House and School of Industry[2] (Sidney V. Stratton, architect, 1878) at 120 West 16th Street. Gabled and domestically scaled, it is of warm, soft brick enclosing some square terracotta panels, with an arched side passage leading to an inner court and back house; its detailing is largely confined to the treatment of its picturesquely disposed windows, with small-paned upper sashes and plate glass lower ones. There are triple windows of Serlian motif and a two-storey oriel that projects asymmetrically.[3] The Astral Apartments, built in Brooklyn in 1885–1886 to house dock workers, provides another similar, and larger, example of red brick and terracotta Queen Anne architecture in New York. 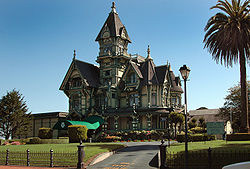 The Carson Mansion located in Eureka, California is considered one of the finest examples of American Queen Anne style architecture.

E. Francis Baldwin's stations for the Baltimore and Ohio Railroad, built variously of brick and wood, are also familiar examples of the style.

The most famous American Queen Anne residence (see photo left) is the William Carson Mansion of Eureka, California. Newsom and Newsom, notable builder-architects of 19th Century California homes and public buildings, designed and constructed (1884–1886) this 18-room home for one of California's first lumber barons. All styles described below as well as others are present in this example of American Queen Anne Style. 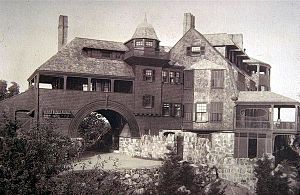 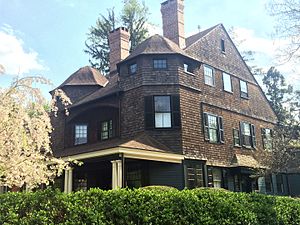 The Shingle Style in America was made popular by the rise of the New England school of architecture, which eschewed the highly ornamented patterns of the Eastlake style. In the Shingle Style, English influence was combined with the renewed interest in Colonial American architecture which followed the 1876 celebration of the Centennial. Architects emulated colonial houses' plain, shingled surfaces as well as their massing, whether in the simple gable of McKim Mead and White's Low House or in the complex massing of Kragsyde, which looked almost as if a colonial house had been fancifully expanded over many years. This impression of the passage of time was enhanced by the use of shingles. Some architects, in order to attain a weathered look on a new building, even had the cedar shakes dipped in buttermilk, dried and then installed, to leave a grayish tinge to the façade.

The Shingle Style also conveyed a sense of the house as continuous volume. This effect—of the building as an envelope of space, rather than a great mass, was enhanced by the visual tautness of the flat shingled surfaces, the horizontal shape of many shingle style houses, and the emphasis on horizontal continuity, both in exterior details and in the flow of spaces within the houses.

McKim, Mead and White and Peabody and Stearns were two of the notable firms of the era that helped to popularize the Shingle Style, through their large-scale commissions for "seaside cottages" of the rich and the well-to-do in such places as Newport, Rhode Island. However, the most famous Shingle Style house built in America was "Kragsyde" (1882), the summer home commissioned by Bostonian G. Nixon Black, from Peabody and Stearns. Kragsyde was built atop the rocky coastal shore near Manchester-By-the-Sea, Massachusetts, and embodied every possible tenet of the Shingle style.

Many of the concepts of the Shingle Style were adopted by Gustav Stickley, and adapted to the American version of the Arts and Crafts Movement.