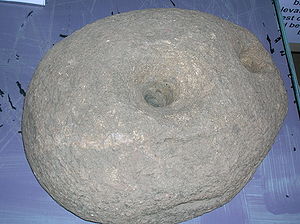 The upper stone of a Scottish hand quern from Dalgarven Mill, North Ayrshire
An ancient tool used to grind food item in Nepal

Quern-stones are stone tools for hand-grinding a wide variety of materials. They were used in pairs. The lower, stationary, stone is called a quern, while the upper mobile stone is called a handstone. They were first used in the Neolithic to grind cereals into flour.[1] 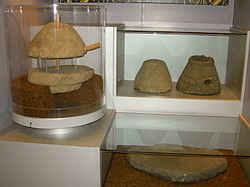 Quern-stones have been used throughout the world to grind materials, the most important of which was usually grain to make flour for bread-making. They were generally replaced by millstones once mechanised forms of milling appeared, particularly the water mill and the windmill, although animals were also used to operate the millstones. However, in many non-Westernised, non-mechanised cultures they are still manufactured and used regularly and have only been replaced in many parts of the world in the last century or so.

In early Maya civilizations the process of nixtamalization was distinctive in that hard, ripe kernels of maize (corn) were boiled in water and lime, thus producing nixtamal which was then made into unleavened dough for flat cakes by grinding with a handstone on a quern (metate).[2]

As well as grain, ethnographic evidence and Mesopotamian texts shows that a wide range of foodstuffs and inorganic materials were processed using stone querns or mortars, including nuts, seeds, fruit, vegetables, herbs, spices, meat, bark, pigments, temper and clay.[3] Moreover, one study analysing quern-stones noted that a number of querns had traces of arsenic and bismuth, unlike their source rocks, and had levels of antimony which were ten times higher than those of the rocks. The authors concluded that this was probably due to the use of these querns in the preparation of medicines, cosmetics, dyes or even in the manufacture of alloys.[4]

Querns were widely used in grinding metals ores after mining extraction. The aim was to liberate fine ore particles which could then be separated by washing for example, prior to smelting. They were thus widely used in gold mining in antiquity.

In the Shetlands tobacco was not smoked when first introduced, but instead was ground up into snuff, and inhaled up the nose. Snuff-querns consisted of an upper and lower stone, fixed together by a central iron pivot. The quern was held on the user's lap, the eye of the quern was filled with dried tobacco leaves, and then the upper-stone was turned using the handle. The friction caused by the turning ground the leaves into a fine powder that built up around the edge of the lower-stone. Many snuff-querns had a small hole or cut made near the edge of the upper-stone, into which a pointed end of a lamb's horn was placed in order to turn the stone; an alternative to using a handle.[5] 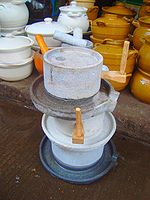 A stack of quern-stones for sale in a market in Haikou, Hainan, China. These quern-stones are only about 30 cm wide.

There are, however, more surprising recorded uses of quern-stones. For example, DeBoer, in his review of the traditional gambling games of North American tribes, reports that one of the games involved bouncing a group of split canes off a quern.[6]

Violence is recorded in the book of Judges (9:53; NRSV): “But a certain woman threw an upper-millstone on Abimelech’s head, and crushed his skull.”

The best type of stone from which to manufacture quern-stones are igneous rocks such as basalt. These have naturally rough surfaces, but grains do not detach easily, so the material being ground does not become gritty. However, such rocks are not always available, meaning that quern-stones have been manufactured from a wide variety of rocks, including sandstone, quartzite and limestone. Quernmore Crag near Lancaster in England is named after the quarrying of millstone grit used to make quern stones in these parts.

Rutter was able to show, for the southern Levant, that basalt quern-stones were preferred to those manufactured from other rock types. Basalt quern-stones were therefore transported over long-distances, leading him to argue that, despite their every-day, utilitarian function, they were also used as a status symbol.[7]

The earliest forms of quern were the saddle and trough querns. The earliest quern so far discovered dates to c. 9,000 BCE and was found at Abu Hureyra, Syria.[1] A later development was the rotary quern, which takes several forms.

The saddle quern is produced by rocking or rolling the handstone using parallel motions (i.e., pushing and pulling the handstone), which forms a shape looking like a saddle. These are the most ancient and widely used type of quern-stone. The handstones for saddle querns are generally either roughly cylindrical (not unlike a rolling pin) and used with both hands, or rough hemispheres and used with one hand. This provides a crushing motion, not a grinding action and is more suitable for crushing malted grain. It is not easy to produce flour from a saddle quern with unmalted grain. The handstone is also referred to as a 'rubber' or 'mouler'.[8]

As the name implies, the rotary quern used circular motions to grind the material, meaning both the quern and the handstone were generally circular. The handstone of a rotary quern is much heavier than that of saddle quern and provides the necessary weight for the grinding of unmalted grain into flour. In some cases the grinding surfaces of the stones fit into each other, the upper stone being slightly concave and the lower one convex.

Querns from the Whithorn Museum.

In this type the upper stone is hemispherical, or bun-shaped, with a central conical hopper to hold the grain that falls down a hole to the grinding surface. It is held in position with a pivot that fits into a central hole in the bottom stone. The upper stone also has a deep horizontal socket in its steep side in which to place the wooden peg used as a handle to rotate or oscillate the upper stone. This was the earliest type of rotary quern to appear in the British Isles. It arrived in Britain in the middle of the Iron Age (about 400-300 BC) and spread into the northern half of Ireland, probably from Scotland, some time after the 2nd century BC.[9]

File:Handquern1.jpg
A hand quern being operated.[10]

The adjustable, discoid rotary quern has larger, flatter and more discoid stones than the beehive type. The lower stone was completely perforated. The long handle rotated in a shallow socket in the upper surface of the upper stone. They are thought to have originated in Spain 2,500 years ago[11] and appear to have arrived in maritime Scotland from about 200 BC with people who built the defensive homes known as brochs. This Iron Age type closely resembles the adjustable Highland quern still in use in historic times.[12]

Garnett in his 1800 tour of Scotland describes the use of a hand quern as follows: "The quern consists of two circular pieces of stone, generally grit or granite, about twenty inches in diameter. In the lower stone is a wooden peg, rounded at the top; on this the upper stone is nicely balanced, so as just to touch the lower one, by means of a piece of wood fixed in a large hole in this upper piece, but which does not fill the hole, room for feeding the mill being left on each side: it is so nicely balanced, that though there is some friction from the contact of the two stones, yet a very small momentum will make it revolve several times, when it has no corn in it. The corn being dried, two women sit down on the ground, having the quern between them; the one feeds it, while the other turns it round, relieving each other occasionally, and singing some Celtic songs all the time."[10]

Other types of quern stones

Other forms of quern-stone include hopper-rubbers and Pompeian mills, both used by the Romans. The larger rotary mills were usually worked by a donkey or horse via an extension arm of wood attached to the upper stone.

There was a legal requirement in Scotland for tenants to pay for use of the baron's mill. Early leases of mills gave to the miller the legal right to break quern-stones which were being used in defiance of thirlage agreements.[13]

The obligations of thirlage eventually ceased to apply, but thirlage in Scotland was only formally and totally abolished on 28 November (Martinmas) 2004 by the Abolition of Feudal Tenure etc. (Scotland) Act 2000.[14]

Similar requirements existed and were enforced actively in England.[15]

A quern was discovered at Dunadd in Scotland which has a cross carved into the upper stone. The cross has expanded terminals and ultimately derives its form from Roman and Byzantine predecessors of the fifth and sixth centuries. This example has a high quality of finishing which reflects its 'cost' and enhances its symbolic value and social significance. The cross is likely to have 'protected' the corn and the resultant flour from evil, such as fungal rust or ergot. Various legends give miraculous power to mill-stones and several have been found which have been re-used in the construction of burial cists or as tomb stones. The association between quern stones and burial may be because they are used in the process of making bread, the staple of life. A broken or disused quern therefore can be seen as symbolic of death.[16] In Clonmacnoise, near Athlone in County Offaly in Ireland, a quern stone was found which had been made into a tombstone, having been ornamented and the name Sechnasach, who died in 928 AD, inscribed onto it.[17]