The RBS-15 (Robotsystem 15) is a long-range fire-and-forget surface-to-surface and air-to-surface, anti-ship missile. The later version Mk. III has the ability to attack land targets as well. The missile was developed by the Swedish company Saab Bofors Dynamics.

The Swedish Navy was pioneering anti-ship missiles with the Halland-class destroyers using the RB08 missile since the early 1960s. Owing to the Defence decision of 1958 the main effect for the navy was a restructuring into a lighter force consisting of FAC vessels and a halt to destroyer procurement. This posed a problem as the existing RB08 missile required launch rails and a missile magazine in the destroyers, taking up space that was simply not there on smaller ships. Adding to the problems, each missile had to be individually prepared for launch and only two missiles could be on the launch rails at the same time. In comparison, the STYX missile used by the Soviet Union (which was the expected adversary) stored the missiles in individual containers on deck which left the missiles immediately available for launch. Tests were carried out on Plejad class FACs with a single bow mounted RB08 in the late 1960s, but these tests came to nothing. 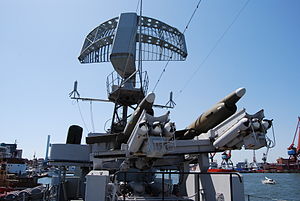 Saab's next attempt at anti-ship missiles to equip the Norrköping class FACs of the Swedish navy was in 1978 under the project name "RB 04 Turbo", a development of the air force RB 04E missile with a turbofan engine, changed wing configuration and start rockets to take off from land. The initial proposal was rejected as inferior to the Harpoon. The project, under the leadership of Hans Ahlinder, then worked out a proposal for a missile with greater capabilities and superior performance to the Harpoon. To indicate that it was a new weapon the project name was changed from "RB 04 Turbo" to "RBS-15".[1] 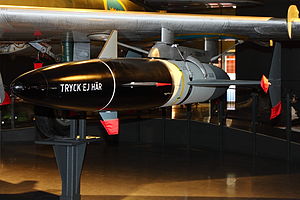 The first weapon contract was signed in 1979; at the last minute the Swedish government did not buy the Harpoon anti-ship missile, opting for an indigenous design. The first missiles were delivered to the Navy in June 1984, and the ship version RBS-15 Mk. I was introduced. 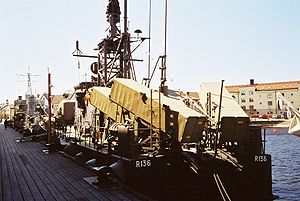 The Swedish Navy ordered the missile in 1984 to develop a coastal defense version of the RBS-15F. The missile was taken into Swedish Navy service as the Rb 15 by the Swedish Navy and became operational in 1985. The Swedish Air Force received their missiles a couple of years later. The Mk. I was produced from 1985 to 1990.

Work on a further developed version, the RBS-15 Mk. II, began in the early 1980s. But it took until 1994 to get a development contract for the upgraded anti-ship missile. The Mk. II has the same range (70+ km), but the mid-course and terminal guidance system, as well as the radar and IR signature were upgraded. The Mk. II has been produced since 1998.

The development of the RBS-15 Mk. III began in the mid-1990s. Emphasis was put on increased range (due to larger fuel capacity and new fuel the range has been increased to some 200 km), improved accuracy (integrated GPS) and selectable priority targeting, which improved the weapon system's flexibility. The Mk. III missile will also be produced by Diehl BGT Defence of Germany for the new class of German stealth corvettes, and is likely to be later used on other German Navy vessels as well. Finnish truck maker Sisu produces missile launch trucks for RBS-15. The Mk. III has been in production since 2004.

The missile was developed from the RB 04 missile that was used by the Swedish air force. The front of the missile was retained, including the warhead, but the rear received new wings and a turbofan engine replaced the rocket previously used. The RBS-15 underwent trials on the missile FAC HMS Piteå from 1983 and became operational with the Swedish Navy in 1985. The Västergötland class submarines were projected to have 4 vertical missile launch tubes for RBS-15 missiles in an extended hull but this was canceled due to budget constraints to not fitting the way Swedish submarines operated.

RBS-15 Mk. I
Powered by a French Microturbo TRI-60 engine, with a thrust of 3.73 kN (380 khp/830 lbf). Range 70+ km
RBS-15F
An Mk. I adapted for air launch. Entered service in 1989.
RBS-15 Mk. II
Range 70+ km. Designed to be launched from a number of different platforms, such as land-based launchers, aircraft, and ships.
RBS-15SF
Mk. II version for Finland. Local designation MTO 85 (Meritorjuntaohjus 1985)
RBS-15 Mk. III
Range over 200 km, with land attack capability.[2] New warhead (increased penetration and insensitive munitions qualification) from TDW. There is only a ship launched version. Production started in 2004. New oval launch tubes instead of the old box type.[3]
RBS-15F ER
Aircraft launched version of the Mk. III
RBS-15SF-3
Both new Mk. IIIs and upgraded Mk. IIs, which have been upgraded to Mk. III standard. Finnish designation MTO 85M
RBS-15 Mk. IV
Currently being developed. Incorporates dual seekers, has a longer range and new missile link system. The radar cross-section has been reduced and its warhead can be changed depending on the mission.[citation needed] 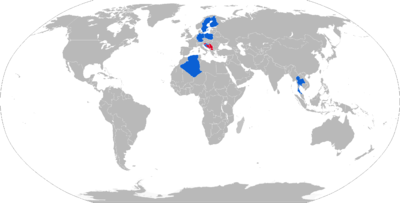 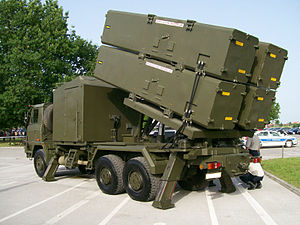 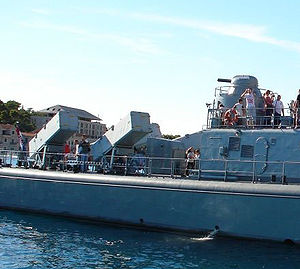 Primary weapon of the Croatian Navy for its five guided missile corvettes and three coastal systems mounted on Tatra trucks. In total, 48 Mk.I units are in service. Plans for upgrading 21 missiles to a standard incorporating elements from both the Mk.II and the Mk.III versions was cancelled in 2009 due to budget restraints but light software upgrades were continuously executed and have improved the missiles' navigation, precision and electronic defence. The latest of this upgrades was conducted in 2010 as part of usual service works. Unexpectedly though, in August 2014 the Croatian government decided to send at least 20 Croatian RBS-15 missiles through an overhaul program so as to keep them operational and current for another 10 years. The missiles are to receive upgrades to increase their range to about 90–100 km as well as to improve their guidance, precision and survivability against jamming. The missiles were successfully tested and fired in a live naval exercise in 2015.

The German Navy has chosen the Mk. IIIs and Mk. IVs to equip its Braunschweig class corvettes and planned F125-class frigates and also plans to upgrade its Brandenburg-class frigates with Mk. III

The Polish Navy has chosen the Mk. III to equip its Orkan class fast attack craft. It signed a deal worth €110 million and Thales Naval Netherlands will modify the Orkan class ships. Mk.II missiles for Navy mobile land based launchers have also been delivered as part of the offset deal.

The Swedish Navy operates the missiles from its Stockholm, Göteborg and Visby class corvettes. The Swedish coastal artillery was also equipped with RBS-15Ms, which were mounted on Volvo trucks. In addition there were four heavy coastal missile batteries, one of which was emplaced on Gotland.[7] The Swedish Air Force operates the RBS-15F. The AJS 37 Viggen and the JAS 39 Gripen carry the missile, with the Viggen no longer in service. The following missiles are or have been used by the different branches: RB04E, RB08A, RBS08A, Mk. I, Mk. II Mk. III, RBS-15F), RBS-15K and RBS-15M.

As a part of its Gripen procurement program, the Royal Thai Air Force is to order the air-launch version, the RBS-15F, to equip its Gripen fighter aircraft.[8]

Some RBS-15s were delivered during the late 80s for the new Yugoslavian Navy FACs to replace existing Russian-built missiles, but the project was never finalized due to the Croatian War of Independence. Missiles are captured by the Croatian Navy.