RTHK operates seven radio channels, and produces television programmes that are then broadcast through local television stations in Hong Kong. While it is government funded, it has a reputation for maintaining editorial independence.[2] RTHK produces and broadcasts educational, entertainment and public affairs programmes. Since 2006, there has been debate whether or not to transform RTHK into a public corporation. 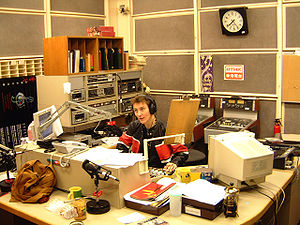 The Hong Kong Government launched their first radio broadcasting in June 1928. They named it under the call-sign "GOW".[3] Several name changes occurred over the next few years, until in 1948, when it was given the name "Radio Hong Kong" (RHK) (Chinese: 香港廣播電台).[3]

In 1949, broadcasting operations were taken over by the Government Information Services (GIS), but by 1954, RHK managed to establish itself as a separate department, becoming independent of GIS.

Up until 1966, RHK was on-air only for three periods during the day: morning, lunchtime, and evening. This was partly due to many presenters being part-time freelancers who had to fit their radio appearances in with their normal daily working schedule.

In 1969 the station's medium wave AM transmitting station was moved from a waterfront site in Hung Hom to the summit of Golden Hill in the New Territories. Although the new transmitters were much more powerful, the mountain-top site proved unsuitable for medium wave transmissions and reception in some areas has remained problematic ever since.

A Public Affairs Television Unit was established in 1970 to produce TV programmes that the independent commercial stations were – and still are – required to broadcast under the terms of their licences. RTHK has no television broadcast transmitters of its own.

RTHK was finally permitted to set up its own radio newsroom in 1973. Until then, all news was prepared by GIS staff. Until 1969 headlines were sent to the studios every half-hour by teleprinter from the GIS headquarters in Central District, while the three daily full bulletins were delivered by hand by a messenger who carried them across Central District. This arrangement became impractical following the move to the new studios in 1969, so initially a GIS newsroom was set up in Broadcasting House. This arrangement also proved unsatisfactory and RHK's own journalists, who until then had been confined to producing magazine programmes, took over the entire news operation.

In July 2013, RTHK's new television channel is going through its trial run and should be ready for official launch by the end of the year. To support the new television operation, the administration is increasing the station's funding by between HK$300 million and HK$400 million a year.[4]

RTHK and the Hong Kong Education Bureau jointly produce Educational Television (ETV, 教育電視), a series of educational programmes for primary and secondary students – airing during non-peak hours on RTHK stations. ETV was first broadcast in 1971 for Primary 3 students and was extended to Primary 6 students in 1974. In 1978, it had been extended to cover junior secondary (Form 1-Form 3) students. RTHK formerly broadcast these programmes on their stations during non-peak daytime hours, but now distributes them online instead.

The RTHK website, named as RTHK on Internet, was originally launched in December 1994; and renamed rthk.hk in 2010.The website is presented in English, Traditional Chinese and Simplified Chinese. All seven of RTHK's radio channels and TV productions are broadcast live over the Internet. 12 months of online programmes and news archives are also available (except the HKCEE and HKALE broadcasts in RTHK2 due to copyright issues with the HKEAA[5]). Online news is available for free via e-mail 3 times per day, as well as providing PDA and podcast-downloadable versions. Original web contents include: e-Learning channel, Culture Web, Chinese Culture Channel and Classics Channel.

The RTHK Service Hotline (香港電台服務熱線) provides information via telephone at +852 2272 0000. The free hotline provides various services such as live relay of all RTHK channels and Legislative Council meetings, the recordings of news summaries and news bulletins etc.

Public concern over the independence of RTHK

Unlike some of the very well-established and respected public broadcasters such as the BBC and NHK, which are primarily funded via a licence fee system, RTHK is funded directly by an annual government allocation, and operates as a department of the government (similar to the Canadian Broadcasting Corporation).

There was controversy in 2000 when then chief executive Tung Chee-Hwa admitted in a public statement that he hoped RTHK would help in sending out the government's messages. Even though this dealt a blow to RTHK's credibility, it has managed to retain its image as an independent news organisation reporting purely in the public's interest.

On the other hand, there has been local argument whether RTHK should be incorporated. Proponents of the idea argued for RTHK to become an independent corporation, separate from the government, so that it could achieve more flexibility, and more cost-efficiency in its operation.

RTHK enjoys editorial independence. The ultimate concern is whether RTHK has enough editorial independence for a public broadcaster. One of the examples was the suspected intervention in RTHK's press freedom in July 1999. After inviting Cheng An-kuo (鄭安國), the highest representative of the "Taiwanese authority" in Hong Kong, to discuss the issue of the separation of China and Taiwan and Lee Teng-hui's "two states theory", RTHK was condemned by Chinese nationalists. Then in October that year, the Head of Radio Broadcasting, Ms. Cheung Man Yee (張敏儀) was transferred to Japan as the Principal Hong Kong Economic and Trade Representative in Tokyo for no obvious reason.

However, there are cases where RTHK's editorial independence has been fully exemplified. There was one episode in Letter to Hong Kong (香港家書) (a programme in which important government officials read letters on Hong Kong matters on air to the public) was rescheduled for another more timely and newsworthy one. The switch had been made possible by a prompt editorial decision. Another case was a recent survey of the Hong Kong media conducted by the Chinese University of Hong Kong School of Journalism and Communication, which placed RTHK in first place amongst the electronic media in terms of credibility. RTHK achieved second place overall when all the local newspapers and magazines were included. [2]

In 2002, a former Chief Programme Officer was convicted of misconduct in public office. The charges related to approving salary increases for one RTHK employee without complying with procedures.

On 8 June 2006, the Independent Commission Against Corruption (ICAC) arrested four people on corruption-related charges, including a deputy head of RTHK 2 and a disc jockey, who were arrested for committing scams totalling about HK$70,000 from 1995 to 2001. They were alleged to have conspired and charged for writing scripts for various programmes that they did not write. Another former disc jockey and her mother were alleged to have aided the conspiracy by using their bank accounts by receiving payments from the radio station. All four were arrested and were released on bail.[6]

RTHK was also criticised by the Audit Commission of the Hong Kong Government for its problems on complying with regulations on staff management. The report especially highlighted the misuse of public funds by the RTHK staff on entertainment expenses, overtime claims and the outsourcing of services.[7]

In July 2007, the head of RTHK and Director of Broadcasting was accidentally spotted by a group of journalists in Causeway Bay along with an unidentified female. The journalists were actually waiting for veteran rock singer Kenny Bee who was in a nearby restaurant. On seeing the gathered journalists, Chu ducked behind his companion. Photos became the main page headlines in some of the major Hong Kong newspapers the following day. Chu, who was one year due to his official retirement from the government, subsequently decided to seek for 'early retirement' in the aftermath.[8]