Radar jamming and deception (Electronic countermeasure) is the intentional emission of radio frequency signals to interfere with the operation of a radar by saturating its receiver with noise or false information. There are two types of radar jamming: Mechanical and Electronic jamming.

Mechanical jamming is caused by devices which reflect or re-reflect radar energy back to the radar to produce false target returns on the operator's scope. Mechanical jamming devices include chaff, corner reflectors, and decoys. 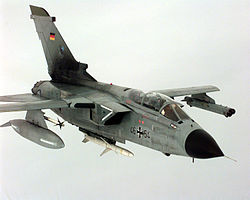 Electronic jamming is a form of electronic warfare where jammers radiate interfering signals toward an enemy's radar, blocking the receiver with highly concentrated energy signals. The two main technique styles are noise techniques and repeater techniques. The three types of noise jamming are spot, sweep, and barrage.

In some cases, jamming of either type may be caused by friendly sources. Inadvertent mechanical jamming is fairly common because it is indiscriminate and will affect any nearby radars, hostile or not. Electronic jamming can also be inadvertently caused by friendly sources, usually powerful EW platforms operating within range of the affected radar. Unintentional electronic jamming is most easily prevented by good planning and common sense, though sometimes it is unavoidable.

Stealth technologies like Radar-absorbent materials can be used to reduce the return of a target.

While not usually caused by the enemy, interference can greatly impede the ability of an operator to track. Interference occurs when two radars in relatively close proximity (how close they need to be depends on the power of the radars) are operating on the same frequency. This will cause "running rabbits", a visual phenomenon that can severely clutter up a scope with useless data. Interference is not that common between ground radars, however, because they are not usually placed close enough together. It is more likely that some sort of airborne radar system is inadvertently causing the interference—especially when two or more countries are involved.

The interference between airborne radars referred to above can sometimes (usually) be eliminated by frequency-shifting the magnetron.

The other interference often experienced is between the aircraft's own electronic transmitters, i.e. transponders, being picked up by own radar. This interference is eliminated by suppressing the radar's reception for the duration of the transponder's transmission. Instead of "bright-light" rabbits across the display, one would observe very small black dots. Because the external radar causing the transponder to respond is generally not synchronised with your own radar (i.e. different PRFs [pulse repetition frequency]), these black dots appear randomly across the display and the operator sees through and around them. The returning image may be much larger than the "dot" or "hole", as it has become known, anyway. Keeping the transponder's pulse widths very narrow and mode of operation (single pulse rather than multi-pulse) becomes a crucial factor.

The external radar could, in theory, come from an aircraft flying alongside your own, or from space. Another factor often overlooked is to reduce the sensitivity of one's own transponder to external radars; i.e., ensure that the transponder's threshold is high. In this way it will only respond to nearby radars—which, after all, should be friendly.

One should also reduce the power output of the transponder in like manner.

The jamming of bat sonar by certain tiger moth species has recently been confirmed.[5] This can be seen as nature's equivalent of radar jamming.