Raindrops Keep Fallin' on My Head 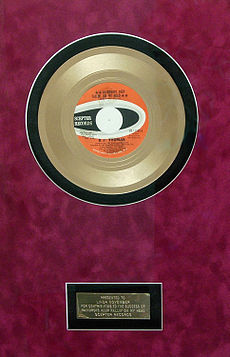 "Raindrops Keep Fallin' on My Head" is a song written by Hal David and Burt Bacharach for the 1969 film Butch Cassidy and the Sundance Kid.[2] It won an Academy Award for Best Original Song.[2] David and Bacharach also won Best Original Score. The song was recorded by B. J. Thomas in seven takes, after Bacharach expressed dissatisfaction with the first six. In the film version of the song, Thomas had been recovering from laryngitis, which made his voice sound hoarser than in the 7-inch release. The film version featured a separate vaudeville-style instrumental break in double time while Paul Newman performed bicycle stunts.

The single by B. J. Thomas reached number 1 on charts in the United States, Canada, Norway and reached number 38 in the UK Singles Chart.[2] It topped the Billboard Hot 100 for four weeks in January 1970 and was also the first American number-one hit of the 1970s. The song also spent seven weeks atop the Billboard adult contemporary chart.[3] Billboard ranked it as the No. 4 song of 1970.[4] According to Billboard magazine, Thomas' single had sold over 2 million copies by March 14, 1970, with eight-track and cassette versions also climbing the charts.[5]

Ray Stevens was first offered the opportunity to record it for the film, but turned it down. He chose instead to record the song "Sunday Morning Coming Down", written by Kris Kristofferson. Bob Dylan is supposed to have been approached for the song, but he, too, reportedly declined.[6] The trumpet solos in the song are performed by Chuck Findlay. [7]

"The song, initially when it came out, I believe it was October of 69, the movie didn't come out until December, it did get some bad reviews. It was a very unique and different sounding song, Bacharach and David never had any qualms about trying to do anything different, or push the envelope so to speak. So nowadays, it sounds pretty tame, but back then, radio resisted it to some degree. But, when the movie came out it hit hugely and sold about 200,000 to 300,000 records a day [and continued selling] for about three years."

On December 3, 2013, the National Academy of Recording Arts and Sciences announced that the single would be inducted into the 2014 Grammy Hall Of Fame.[12]

"Raindrops Keep Fallin' on My Head" was used in the film Spy Hard, which parodied the scene in Butch Cassidy and the Sundance Kid. It is on the soundtracks to Forrest Gump and Spider-Man 2, in the latter accentuating Peter Parker's blissful mood after abandoning his Spider-Man identity and its responsibilities. It was used in the Kevin Smith film Clerks II. The first episode of the second season of the popular medical drama Grey's Anatomy is named after the song. It is also used in The Simpsons, episode 16 of the fourth season, called Duffless, at the end of the episode, while credits are presented. It was also used in a season 1 episode of Arrested Development entitled "Altar Egos". It was also used in the 2003 film "The In-Laws" starring Michael Douglas and Albert Brooks, which was a remake of the 1979 Peter Falk / Alan Arkin film.

The song has been covered numerous times. From January 24, 1970 to March 13 it was a number-one hit (for seven weeks) in Australia on the Go-Set National Top 40 for local pop singer, Johnny Farnham.[15][16] In 1970, it was also covered by Engelbert Humperdinck on his album We Made It Happen, Johnny Mathis on his album Raindrops Keep Fallin' on My Head, Perry Como on his album It's Impossible, The Four Tops on their album Changing Times, Andy Williams on his album, Raindrops Keep Fallin' on My Head, and The Free Design on their album Stars/Time/Bubbles/Love. Portuguese-born television and radio presenter Pedro Biker released a Danish version re-entitled "Regndråber Drypper I Mit Hår" in 1970.[17]

In September 1970, Phyllis George representing Texas performed the song on the piano on her way to winning the Miss America 1971 title.

It has been covered in Spanish by English singer Matt Monro. This version is known as "Gotas de lluvia que al caer".

It has been covered in French by French singer Sacha Distel, whose version Toute La Pluie Tombe Sur Moi was a number 10 hit in the UK Singles Chart,[2] and number 13 in Ireland, as well as number 10 in France. Distel also recorded a version with the original English lyrics, and another in Italian, Gocce Di Pioggia Su Di Me. Bobbie Gentry's version reached number 40 in the UK chart.[2] Paul Mauriat recorded it with his Grand Orchestra it 1973. It was the only known cover in the USSR.

Jacques Loussier recorded a cover on his 1987 album In Loussier's Mood. The Flaming Lips covered it on 1996's Brainville EP. Ben Folds Five also covered it for the 1998 Burt Bacharach tribute TV special and soundtrack One Amazing Night.

The Welsh rock band Manic Street Preachers maintain "Raindrops Keep Fallin' on My Head" in their repertoire of live songs, playing it as part of an acoustic set during concerts. The band recorded a version of the song complete with trumpet solo by their drummer Sean Moore. It was the first piece of music the band recorded after the disappearance of guitarist and lyricist Richey Edwards, and saw release on the 1995 charity album Help. That version also appears on their 2003 B-sides and rarities compilation album Lipstick Traces (A Secret History of Manic Street Preachers). The Manics further reference the film Butch Cassidy and the Sundance Kid with the B-side "Sepia".

In 1998, Shonen Knife covered it as part of Big Deal Recording Artists Perform The Songs Of Burt Bacharach.

Lisa Miskovsky covered the song in the extended version of her self-titled (2004) album.[20]

In 2005, Australian band Jebediah covered it for Triple J's Like a Version compilation. Dionne Warwick has collaborated with Kelis on a cover for her 2006 duets album, while Barry Manilow covered it on his 2006 album The Greatest Songs of the Sixties.