From Infogalactic: the planetary knowledge core
Jump to: navigation, search
Not to be confused with Ranulph Fiennes.

In 2011, Fiennes made his directorial debut with his film adaptation of Shakespeare's tragedy Coriolanus, in which he also played the title character. Fiennes won a Tony Award for playing Prince Hamlet on Broadway. Since 1999, Fiennes has served as an ambassador for UNICEF UK.

Fiennes is an eighth cousin of Charles, Prince of Wales,[6] and a third cousin of adventurer Ranulph Fiennes and author William Fiennes.[7] He is the eldest of six children. His siblings are actor Joseph Fiennes; Martha Fiennes, a director (in her film Onegin, he played the title role); Magnus Fiennes, a composer; Sophie Fiennes, a filmmaker; and Jacob Fiennes, a conservationist. His foster brother, Michael Emery, is an archaeologist. His nephew Hero Fiennes-Tiffin played Tom Riddle, young Lord Voldemort, in Harry Potter and the Half Blood Prince.

The Fiennes family moved to Ireland in 1973, living in West Cork and County Kilkenny for some years. Fiennes was educated at St Kieran's College for one year, followed by Newtown School, a Quaker independent school in County Waterford. They moved to Salisbury in England, where Fiennes finished his schooling at Bishop Wordsworth's School. He went on to pursue painting at Chelsea College of Art before deciding that acting was his true passion.[8]

Fiennes trained at the Royal Academy of Dramatic Art between 1983 and 1985. He began his career at the Open Air Theatre, Regent's Park and also at the National Theatre before achieving prominence at the Royal Shakespeare Company.[5] Fiennes first worked on screen in 1990 and then made his film debut in 1992 as Heathcliff in Emily Brontë's Wuthering Heights opposite Juliette Binoche.

1993 was his "breakout year". He had a major role in the controversial Peter Greenaway film The Baby of Mâcon with Julia Ormond, which was poorly received. Later that year he became known internationally for portraying the amoral Nazi concentration camp commandant Amon Goeth in Steven Spielberg's Schindler's List. For this he was nominated for the Academy Award for Best Supporting Actor.[5] He did not win the Oscar, but did win the Best Supporting Actor BAFTA Award for the role. His portrayal as Göth also earned him a spot on the American Film Institute's list of Top 50 Movie Villains. To look suitable to represent Goeth, Fiennes gained weight, but he managed to shed it afterwards.[9]

Fiennes later stated that playing the role had a profoundly disturbing effect on him.[10] In a subsequent interview, Fiennes recalled,

Evil is cumulative. It happens. People believe that they've got to do a job, they've got to take on an ideology, that they've got a life to lead; they've got to survive, a job to do, it's every day inch by inch, little compromises, little ways of telling yourself this is how you should lead your life and suddenly then these things can happen. I mean, I could make a judgment myself privately, this is a terrible, evil, horrific man. But the job was to portray the man, the human being. There’s a sort of banality, that everydayness, that I think was important. And it was in the screenplay. In fact, one of the first scenes with Oskar Schindler, with Liam Neeson, was a scene where I'm saying, "You don't understand how hard it is, I have to order so many-so many meters of barbed wire and so many fencing posts and I have to get so many people from A to B." And, you know, he's sort of letting off steam about the difficulties of the job.[11] 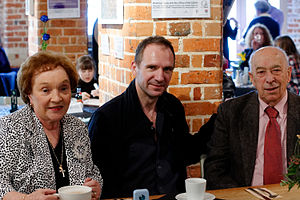 In 1994, he portrayed American academic Charles Van Doren in Quiz Show. In 1996 he was nominated for the Academy Award for Best Actor for the World War II epic romance The English Patient in which he starred with Kristin Scott-Thomas.[5] Fiennes' film work has ranged from thrillers (Spider) to animated Biblical epic (The Prince of Egypt) to camp nostalgia (The Avengers) to romantic comedy (Maid in Manhattan) to historical drama (Sunshine).

In 1999, Fiennes starred in the role of Eugene Onegin in Onegin, a movie which he also helped produce. His sister Martha Fiennes directed and brother Magnus composed the score.

The Constant Gardener was released in 2005 with Fiennes in the central role.[5] The film is set in Kenya, dealing in part with real people in the slums of Kibera and Loiyangalani. The situation affected the cast and crew to the extent that they set up the Constant Gardener Trust to provide basic education for children of these villages. Fiennes is a patron of the charity.[12]

He is also a patron of the Shakespeare Schools Festival, a charity that enables school children across the UK to perform Shakespeare in professional theatres.[13]

Fiennes' 2006 performance in the play Faith Healer gained him a nomination for a 2007 Tony Award. In 2008, Fiennes worked with frequent collaborator, director Jonathan Kent, playing the title role in Oedipus the King by Sophocles, at the National Theatre in London. In 2008, he played the Duke of Devonshire in the film The Duchess, and played the protagonist in The Reader. 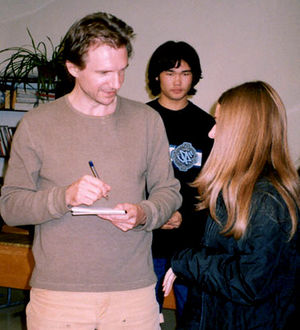 Fiennes meets young journalists in Bishkek, Kyrgyzstan in 2003 during his visit as a UNICEF UK ambassador.

In February 2009, Fiennes was the special guest of the Belgrade's Film Festival FEST. He filmed his version of Shakespeare's Coriolanus in the Serbian capital of Belgrade.[14]

Fiennes reunited with Kathryn Bigelow for her Iraq War film The Hurt Locker, released in 2009, appearing as an English mercenary. They had previously worked together on Strange Days (1995). In April 2010, he played Hades in Clash of the Titans, a remake of the 1981 film of the same name. In 2012, he starred in the twenty-third James Bond film, Skyfall, directed by Sam Mendes. He will replace Dame Judi Dench as M in future Bond films.[15] Interestingly, Dench and Fiennes' brother, Joseph, have acted in Shakespeare in Love.

Though he is not noted as a comic actor, in 2014 he made an impression for his farcical turn in The Grand Budapest Hotel. Said one critic about the film, "In the end it's Fiennes who makes the biggest impression. His stylized, rapid-fire delivery, dry wit and cheerful profanity keep the movie bubbling along."[16] For his performance, Fiennes was nominated for the Golden Globe Award for Best Actor – Motion Picture Musical or Comedy and the BAFTA Award for Best Actor.

In 2015, Fiennes will star in Luca Guadagnino's thriller A Bigger Splash.[17]

Fiennes is a UNICEF UK ambassador and has done work in India, Kyrgyzstan, Uganda and Romania.[18]

Fiennes met English actress Alex Kingston while they were both students at the Royal Academy of Dramatic Art. After dating for ten years, they married in 1993 and divorced in 1997.[19]